In this game, the sword techniques are learnt throughout the quest from different swordmasters: 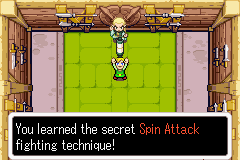 It makes a spinning attack.
Learnt from Master Swiftblade, in his house of the southern district of Hyrule Town.

It allows you to break blocks (small rocks) and pots.
Learnt from Master Swiftblade, in his house of the southern district of Hyrule Town.

The sword can be raised right after a roll.
Moreover, as soon as you learn this technique, you automatically perform a Spin Attack if you touch an enemy right after doing the Roll Attack.
Learnt from Master Grayblade, inside a cave in the east of Mt Crenel, right above the Business Scrub's one. 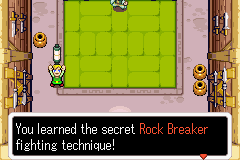 It allows you to raise the sword while you're running.
Learnt from Master Swiftblade, in his house of the southern district of Hyrule Town.

When you only have one heart left, the sword fires beams.
Learnt from Master Waveblade, inside a tree in the southwest of Lake Hylia.

When all your hearts are full, the sword fires beams.
Learnt from Master Grimblade, by going down a hidden ladder in the southeast of Hyrule Castle Garden. 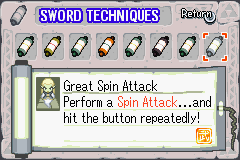 It allows you to jump into the air and strike downward.
Learnt from Master Swiftblade, in his house of the southern district of Hyrule Town.

You perform a chain of Spin Attacks!
Learnt from Swiftblade the First, under the tombstone in the southwest of Castor Wilds.

Apart from the 8 basic techniques, there are 3 technique upgrades for which you don't get any scroll:

You can now perform your Spin Attack faster.
Learnt from Master Scarblade, inside the waterfall of Castor Wilds, after the 50th Kinstone Fusion.

The Split Gauge charges faster.
Learnt from Master Splitblade, inside the waterfall in the middle of Veil Falls, after the 80th Kinstone Fusion.

The Great Spin Attack lasts longer.
Learnt from Master Greatblade, inside the waterfall of North Hyrule Field, after the 79th Kinstone Fusion. 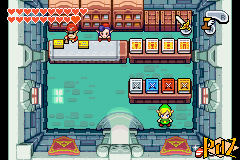 Following a Kinstone Fusion with the mailman doing his delivery in Hyrule Town, a new employee, Marcy, will appear at the Post Office. Talk to this employee and pay 200 rupees to subscribe to the town's Swordsman Newsletter. Each issue gives out tips and tricks about the game. You can buy one for each Tiger Scroll you will earn, meaning a grand total of 8.

Here is what they contain:

"Some Walls Go Boom..."
It may look like a regular wall, but it may be something you can blow up. There's actually an easy way to tell. And I'm here to teach you! Build up the power in your sword and start stabbing the wall. If you pay attention, you'll find that some spots make a different sound!

"Teach us, Teacher!"
Monsters got you? Don't give up! Start mashing buttons! You might be able to escape quickly!

"Swiftblade's Gossip Column"
The Magical Boomerang... Somewhere in Hyrule, you can find an incredibly handy boomerang. It's designed so you can change its direction after you throw it! Or so I've been told. But it's just a rumor...

"Swiftblade, Signing Off!"
That's it for our first issue! We plan to bring you helpful questing hints every week, rain or shine. Be sure to check with your local post office for future issues! See you in issue 2! Until next time, warriors!

"This Year's Must-Have Item!"
Have you seen those sparks that move along walls? Your sword doesn't work, so maybe you've just given up fighting them. But have you tried ALL your items? Like...what about your boomerang? Give that a shot! You might be surprised at the results!

"Teach us, Teacher!"
Monster took your shield? Well, don't get all down about it. All hope is not lost. Beat him up quickly, and you might just get it back!

"Swiftblade's Gossip Column"
The Mirror Shield... A beautiful, glimmering shield capable of reflecting monsters' shots. You can use it to turn their attacks back at them. Or so they say... But it's just a rumor...

"Swiftblade, Signing Off!"
Issue 2 is out the door! We've got our first reader letter! Let's answer it now! "Hey, Swiftblade, what's your best feature?" That would be my eyebrows! I spend a lot of time grooming these suckers! See you in issue 3! Until next time, warriors!

"Got a Bone to Pick?"
You're sure to run into more than a few skeletons on your journey. That's why this week's newsletter is dedicated to all you bone-breakers! A good, solid whack to the head should do the trick. That's their weak spot! Try smacking them with a beam from your Cane of Pacci. You should also try your Gust Jar. That head should just pop right off! They go all to pieces once they lose their head.

"Teach us, Teacher!"
Those darn Bob-ombs! If you hit them with your sword, they'll run all over the place and explode! But don't you worry. This newsletter's here to teach you how to cope! Your best bet is arrows! One shot can take them down! You can fire from a safe distance, too! There's also your Gust Jar... Draw them in and shoot them out, and they'll even blow up whatever they hit!

"Swiftblade's Gossip Column"
Light Arrows are amazing... They go through grass! They fell a monster with on strike! They're handy! They're dandy! They're a super-duper-ultra-item! Or so it seems... But it's just a rumor...

"Swiftblade, Signing Off!"
We've got more reader mail this week! "Hey, Swftblade! How many siblings do you have?" There are nine of us, not counting the ghost of Swiftblade the First. I'm the oldest, but again, that's if you don't count Swiftblade the First! See you in issue 4! Until next time, warriors!!!!

"Seek Out the Strong!"
Have you ever seen a golden monster? When you fuse Kinstone pieces, you might get the rare chance to meet one. They're much stronger than the regular version of that monster. Of course, if you beat one of 'em, you'll get something REALLY good! If you see one, go fight it instantly! Just drop everything and go!

"Teach us, Teacher!"
Coping with a Thorny Situation. Those thorny little thorn monsters! Your sword doesn't hurt 'em at all! But if you bump 'em with your shield up, they'll totally flip! There are other ways, though, Flip 'em with a bomb! Or your Cane of Pacci! Or with a well-placed Down Thrust! How's that for options? Your head must be swimming at the possibilities!

"Swiftblade's Gossip Column"
Remote Bombs... Here's a secret: you can blow them up whenever you want! How cool is that?! Or so it seems... But it's just a rumor...

"Swiftblade, Signing Off!"
I went to Lon Lon Ranch the other day. I saw the ghost of Swiftblade the First defeat a cow with his bare hands! It was kind of sad, really... See you in issue 5! Until next time, warriors!!!!

"Fire Up That Chilly Chump!"
Have you seen a sorcerer who throws cold curses at you? Yeah, the one who keeps disappearing! That's him! Well, next time he shows up, whack him with your lantern! Fire against ice! It's the law of nature!

"Teach us, Teacher!"
Those pig-faced Moblins... You see them around the Minish Woods, right? They're big and dumb? Well, they're also rich! Beat one up for some quick cash!

"Swiftblade's Gossip Column"
A tidbit about amulets... I hear that there's a mysterious amulet that raises you abilities if you use it! Well, that's what I heard, anyway... But it's just a rumor...

"Swiftblade, Signing Off!" (author's note: I don't know if it's a real info?)
I went to Smith's the other day. The old guy's still looking pretty good. ... ... But I AM a little concerned about the guy in green tights on the hill there... See you in issue 6! Until next time, warriors!!!!

"Here's What You Do!"
Have you seen a monster wrapped in bandages? It tries to grab you? Well, here's a pro tip: bandages burn easily, especially on a mummy! I don't have to spell this out, do I? Yeah, you know what I'm about to say! That's right, it's time to light up their world FWOOOSH!

"Teach us, Teacher!"
Those heavy-handed Floor Masters... And their irritating friend, the Wall Masters... They're really annoying, but if you beat one, they say you'll be rich!! But it's just a rumor... Don't complain to me if it turns out to be wrong.

"Swiftblade's Gossip Column"
Rupee-stealing nasties... Those Rupee-camouflaged creeps have been ripping a lot of of you lately. I've heard that you greedy adventurers are getting soaked! In fact, I hear that the greedier you are, the more it takes! Or so it seems... But it's just a rumor...

"Swiftblade, Signing Off!"
We've got reader mail again! "Hey, Swiftblade, do you have a hobby?" Training! See you in issue 7! Until next time, warriors!!!!

"For Real Swordsmen Only"
You know the Roll Attack, right? Yeah, the one you do midroll! I bet Grayblade told you to attack just as you finish the roll, right? Well, actually, you can do it just as you start the roll, to! But the timing is very tricky! You can do it! Hone your skill! The jouney of a thousand miles begins with a single step! Or...something!

"Teach us, Teacher!"
Camouflaged shell-shockers... These fiends festoon themselves with grass and rocks to deceive your eyes. But you can remove their camo without trying to pick them up, you know! Hit them with that Cane of Pacci! Suck them with the Gust Jar! How do you like that!? Now you're a camo-buster!

"Swiftblade's Gossip Column"
Those short-fused Bob-ombs... I told you about them in issue 3, but here's another thing... Apparently they drop bombs at a higher rate than other enemies! Or so it seems... But it's just a rumor...

"Swiftblade, Signing Off!"
The next one is our last issue! After that, it'll be time for me to put down my pen. As much as I like writing, I'm a teacher at heart. But I know you'll miss me when I'm gone. I'm like a star! A superstar! Issue 8, the last one, is coming soon! Hope you're looking forward to it! Until next time, warriors!!!!

"The Way to the Sacred Blade"
Have you ever wished you could unleash you Spin Attack a little faster? Or perhaps split faster? Or maybe you wanted a longer Great Spin Attack? It's only natural to want these things. Every Warrior wants to be his best! So now for some good news! I haven't confirmed it, but there MAY be a way! All of these things could be yours if you only figure out how to do it!

"Teach us, Teacher!"
The one-eyed statue Eyegore... You have to shoot him with an arrow to make him move... But if you beat him, he almost always drops spare arrows for you! So don't you worry about running out of arrows once you've beaten him! Just fire away!

"Swiftblade's Gossip Column"
Armos, fabled creations of the Minish. I hear that they drop Kinstone pieces when you beat them! Or so it seems... But it's just a rumor...

"Swiftblade, Signing Off!"
That's all the news for you! If you get lonely, just come over and spar a while! And thanks for reading! I hope you've enjoyed it as much as I have. And now, let me sign off one final time with that oh-so-familiar farewell... Until next time, warriors!!!!