Breath of the Wild - Guardians and ancient enemies' guide

Written by Alstar and translated by Sarah 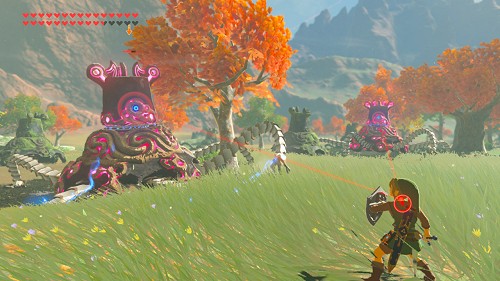 Location: Mostly in Hyrule Field, but also in other fields
Difficulty: 7/10

Description: Guardians are the most emblematic enemies of Breath of the Wild. They look like huge shooting turrets standing on six robotic feet. Their head can move all the way round, which is very useful for firing explosive beams with their tiny murderous blue eye.

Their attacks: The Guardian's sole attack is its explosive beam. It starts by aiming at you with its red laser dot which gets still right before firing at you. This attack is predictable, but is deadly, is fast and can cover a great distance, making it hard to escape a Guardian's chase. (Hide behind some walls or large trees.)

To defeat them: At the beginning of the game, it's very hard to face the Guardians because of their huge amount of life points as well as their power. But as the game goes on, several methods can be used:

A note from Max4081: Fighting off a Guardian Stalker on a horse at full-speed gives a strong advantage. As a matter of fact, the horse's speed boosts the damage for melee weapons and allows to destroy the Guardian's legs faster (a single blow from the Master Sword is enough to destroy a leg). The horse is also good for turning the Guardian over very easily, by putting it on its head. This makes it unable to do anything for a while. 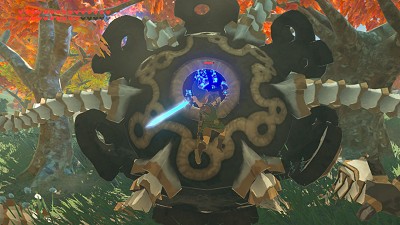 Do note that the Master Sword deals twice as much damage to the Guardians, but it takes two hits from it to destroy a leg.

Location: In the shrines with tests of strenght
Difficulty: 2/10 to 5/10

Description: Guardian Scouts, as their name suggests, are replicas similar to the Guardians with a smaller built. They have a base looking like a circle standing on three robotic legs. Their round head may be crowned by one to three circular patterns depending on the Guardian Scout's strenght. They can also stretch vertically to reveal a cylindrical body as well as arms wielding Ancient Weapons (between one to three). And of course, they also have this eye typical of Sheikah inventions.

Their attacks: At the beginning of the fight, Guardian Scouts will approach you by trying to fire three small laser projectiles. Most of their attacks consist in attacking you with their laser weapons, meaning a lateral sword blow, a spear thrust or two big slow axe blows. They can also perform a back jump before rushing at you and spinning their weapons like a spinning top would. When their life goes down, they fire a laser on the ground while spinning round. And finally, when they're about to be defeated, they load up a three-time laser, which would make the Guardians proud.

To defeat them: First of all, keep your shield up, the Guardian Scout may fire a round of three projectiles while approaching you. The rest of the fight is rather simple, you just have to attack the robot in close combat while avoiding its attacks. Dodge the side sword and spear blows (be careful since the spear is rather fast) and perform a backflip to dodge the huge axe blows that deal a lot of damage. Some Guardian Scouts hide behind some shields, you then have to either hit them enough for them to drop their guard, or to wait for them to do it on their own.
If the Guardian Scout jump backwards and prepares a spin attack, hide behind one of the room's many pillars to stun the robot when it will dash at it. Some rooms don't have pillars; you'll either find some water on the ground, or some metal blocks stuck in the ground. So use Cryonis or Magnesis depending on the situation to get out of this predicament. You can also stop the attack by zapping the Guardian (arrows, rod, etc.).
If your foe is getting ready to fire its beam by rotating its head, go far and wait for it to attack. A rising current will be generated and you'll be able to make use of it to take off and attack the Guardian Scout from the air. Finally, when the latter is short on life and is loading its most powerful attack, use a very powerful two-handed weapon and get rid of it before it can act! 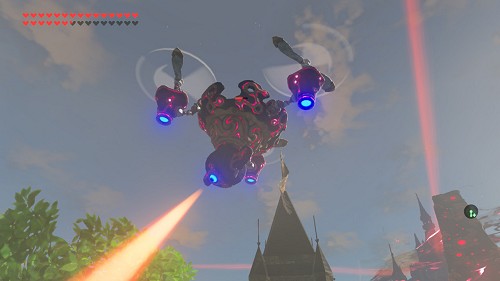 Location: Mainly in Hyrule Castle and around it, and in the Akkala region
Difficulty: Goes between 2 and 7/10

Description: The Guardian Skywatchers are like Guardian Stalkers which would have been flipped on their heads. They have three propelling blades which allow them to stay in the air. Their round head, that they use amongst other things to scan the ground with their eye, is less impressive than the Guardian Stalkers', but it doesn't make their skills any less dangerous.

Their attacks: The Guardian Skywatcher, like its ground buddy, only fires deadly beams to a rather slow rhythm. However do note that it's easier to escape the latter's red pointer, because to the contrary of the Guardian Stalker, it won't chase you around, but rather tends to keep its position.

A note from Max4081: If you want to save your Ancient Arrows, you can use an Ancient Bow and two regular arrows to destroy a blade, or 3 Bomb Arrows with another bow.