At the end of Ocarina of Time, Link sends Ganondorf back to the Sacred Realm. Princess Zelda brings Link back to his younger days and peace reigns again in Hyrule. The story of the Majora's Mask starts three months later. 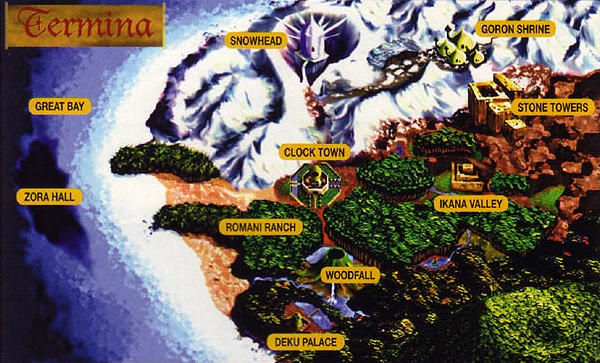 One day, while Link is exploring the woods, two small fairies suddenly appear and frighten Epona. Link is on the ground unconscious. And that is when a strange small fellow, named Skull Kid, takes hold of the precious Ocarina and runs away with Epona through a mysterious passage. Of course, Link chases him and finds himself in a weird and totally unknown world: Termina. He soon realizes that the end of this world is close, as the moon is getting nearer dangerously. With the help of Tatl, one of the fairies left behind by Skull Kid, Link decides to save Termina before the next 72 hours remaining.

First of all, he will have to get used to his new appearance and the abilities that come with it. He will also have to meet the inhabitants of Clock Town, some of them being oddly familiar to him. A great deal of adventures and quests await Link through the mission entrusted by the Mask Salesman to foil Skull Kid's plans: bring back the Majora's Mask!