Even more tips and tricks

To beat a dungeon at 100%, play the Inverted Song of Time from the Dawn of the first day. This way you should have time to find all the Stray Fairies and beat the dungeon within three days.

No more damage with the Blast Mask, simply raise your shield while triggering the explosion!

In the Deku Palace, wait for the night to come to visit the inner gardens. The guards' field of vision will be visible and so you can sneak past them more easily.

Other Magic Beans on sale

If you need Magic Beans and you don't want to go back to the Deku Palace, go to the Swamp Tourist Centre (with the Song of Soaring) and talk to the Deku Scrub with the Deku Mask. They also cost 10 rupees.

If so, it's crawling with bugs in a hole just facing the Astral Observatory (in the east of Termina Field).

To get free milk (one portion fills five hearts), stand in front of a cow and play Epona's Song to fill a bottle!
Apart from Romani Ranch there are also cows on Great Bay Coast: In the north-east part, throw the Hookshot at the left pillar, then drop through the hole on the next platform.
You can also find some in Termina Field, near the road leading to the Southern Swamp is a huge hollow trunk. Place a bomb in the middle of the trunk, jump through the hole and play Epona's Song!

Near each Owl Statue is a pot or a bush hiding a fairy. Put it in a bottle, leave the place and come back to find another one. Repeat this as many times as you wish.

Still need a fairy? Play a song in front of a Gossip Stone to make one appear.

Win at the lottery

From the moment you can buy Powder Kegs from the Goron in the mountain, you can also buy some from the Goron at the Bomb Shop in Clock Town. Wear the Goron Mask and pay 50 rupees.

Defend the barn in slow-motion

If you have trouble defending Romani's barn, play the Inverted Song of Time at 2:30. You will have to defend it longer, but the ghosts will get close more slowly.

When you are cursed (you cannot use your sword), play the Song of Storms to cure right away!

If you own the Great Fairy's Sword, you can use it anyway, as it doesn't use the B button!

Sell items at the Curiosity Shop 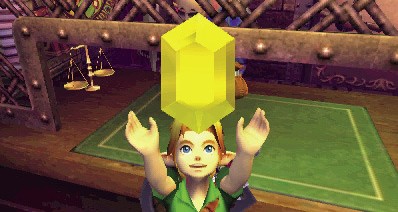 Any item in a bottle can be sold 20 rupees at the Curiosity Shop, except for Magic Mushrooms which are only worth 5 rupees, whereas Poes and Gold Dust are worth 200 rupees!

If your sword or a bottle get stolen from the bird near the path to the Milk Road, you can play the Song of Time to get them back but you can also buy them at the Curiosity Shop in West Clock Town!

How not to be noticed from "skeleton fishes"?

When you are in the water and there are skeleton fishes, stop moving and they won't attack you!

Go down into the Empty Well (for example), wear the Gibdo Mask, get close to a mummy and shoot a fire arrow at it to turn it into a ReDead!

When you mount Epona, enemies cannot hurt you. Rush at them without fear, not only will they be defeated, but you will also collect rupees, bombs, arrows, etc.!

With lock-targeting activated, Link can automatically use a powerful attack at a distance. You just need to press the B button and Link will throw a kind of blue beam, which creates great damage, to the Majora's Mask for example. Even if the beam hits the front of the mask, Majora will fall.

With the Pictograph Box, go in front of the Swamp Tourist Centre. Climb the ladder, take a picture of the Deku Scrub selling Magic Beans, then enter the house. Talk to the man and show him the picture. He says it's ordinary but proposes two prizes: 5 rupees or a free ride. Choose the ride and that's it!

To play this game where you have to find a chest while running past walls, you can save rupees: As Link, it costs 20 rupees, as Deku Link: 10 rupees, as Goron Link: 30 rupees and as Zora Link 5 rupees! (Then you can change mask and run!)

Lock him then when he runs at you, dodge his attack. He will stay still looking everywhere. At this moment throw your Hookshot at him, he will "freeze" (turn blue). Take advantage of this moment to do a jump attack. Repeat this twice to defeat him.
Note: a jump attack (when you press "A") equals two normal strikes (when you only press "B"). With two jump attacks and a normal one you beat him in three hits!

When there are less than 6 hours left before the moon falls, go to the Sword Master's Dojo. There will be a sign saying that he went on holiday for a short while and please don't look for him. If you climb on the platform and strike the wooden door, you will be in a secret room with pots and the Sword Master hiding in a corner. Talk to him to see he's really scared!

If you go there at about 7:30pm on the third day, he Sword Master says: "Rumors are spreading that suggest the moon is falling, but you can breathe easier as long as I'm in town. Tonight I shall cut the moon into pieces! If one does not have such skill, he cannot teach the way of the sword to others.

To jump further on the water as Deku Link, you need to attack with the "A" button just before going on the water! PS: It looks like rolling before jumping to go further as normal Link.

Avoid the fight against Gekko in Great Bay Temple

When you arrive in the room with the big yellow chest holding the Boss Key, you just need to shoot an ice arrow at the water to create a block, turn into a Zora, then jump on to this block, then to the opening in front of the big chest and the key is yours!

Play an instrument for real!

Like in Ocarina of Time, it is possible to play notes like on a real instrument, but here you can play the ocarina, drums, pipes and the guitar! Hold the L button pressed and play a note. You can also move the joystick to change the intonation.
When you play the guitar, you can see Zora Link striking different poses for the show!

After talking with the injured witch in the Lost Woords and then with her sister, you get a red potion for her. However you can use it as you like! You can keep it for yourself or use it to help Shiro at the Pirates' Fortress and get the Stone Mask free of charge^^

Reactions of characters and enemies with masks

A less dangerous technique allows you to keep almost all your hearts: you have to aim at the enemy while staying a bit away, fire a light arrow and right away throw a bomb at him, always having him locked. This takes about ten bombs or more to defeat him (knowing that you won't hit him each time).

Oni-Link's form can be used against the final boss but also against the ones in the previous temples.

Just for info / for fun

Thanks to everyone who send tips!