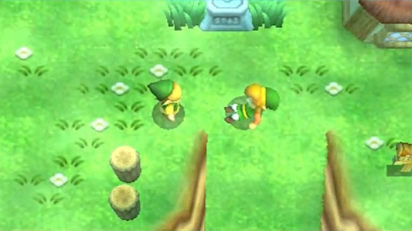 The game starts with Link having a nightmare. As he is sleeping, a small boy, Gulley, calls him and wakes him up. He says that adults have started working and that he must join him outside. After getting up, pick up and throw away the three pots to win a first rupee. You can also notice the Majora's Mask in a corner of the room ;-) Go out. You meet Gulley again who is waiting for you. He advises you to check the weather vane that is sleeping. Go near it and spin it, it appears on the map. Save the game, then go left. Continue in the direction taken by Gulley, then go left and join him. Open the door to the blacksmith's forge. 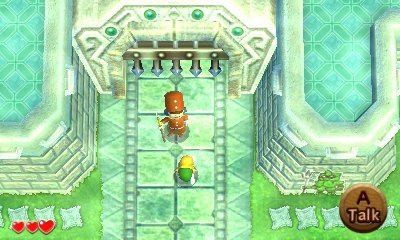 The boss and the captain are talking. As you are being scolded, the blacksmith's wife sees that the captain has forgotten his sword. You are then asked to bring it back to him. Take the captain's sword on the table, then the blacksmith marks the Hyrule Castle on your map, where the captain went. Leave the blacksmith's shop and check out the map to see that the Hyrule Castle is northeast from your actual position. Go east as you throw bushes to collect more rupees, then cross the bridge leading to the castle entrance. Check out the painting on the right wall, then talk to the soldier. He says that the captain has not returned yet and that he is probably with Seres at the Sanctuary. He also says that the castle is upside down because of strange drawings, then he shows you a shortcut to the Sanctuary. 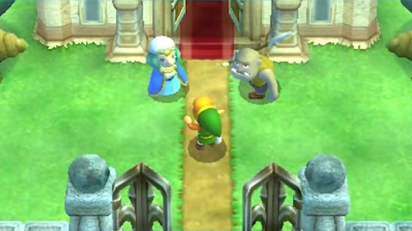 Go west, north, turn left, then go north again. When you see a sign in front of you near a pond, go east towards the Sanctuary. Enter its outer grounds, touch the weather vane to add it on your map, then proceed. Seres says hello and tells you that the captain is talking with her father. Dampe says that the captain has actually come to see Seres and that he has also noticed drawings on the castlewalls. This is when Seres begins to scream! And the Sanctuary's doors are shut tight! The grave digger remembers about a secret passage which connects the graveyard to the Sanctuary. Accept to go rescue Seres: you can now use the sword that you were supposed to deliver to the captain. Go right and use the sword to cut the small trees and enter the graveyard. Go near the big gravestone, grab it and push it. 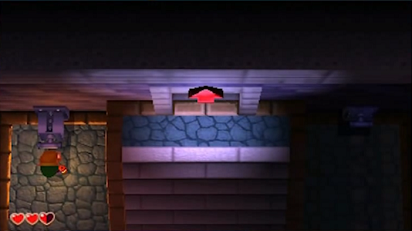 Go down the steps, move a bit to the right, then to the north, then open the chest which holds the Lamp! Enter the Items screen to set it to the Y button, then break the pots to get rupees and small hearts. Go northwest and light the two braziers to open the door. Go through this door, open the small chest on the left to find 20 rupees; then, if you wish, get rid of the rats with the sword. Use the braziers to find a large staircase on the far left, go up, then follow the way to the right until you find a chest that holds a Small Key! Go back left and unlock the door. Be careful! Three ghosts attack you! Defeat them with the sword, then go on northward. Move left, grab the lever and pull it as much as you can to unseal the door. Go on to the Sanctuary. 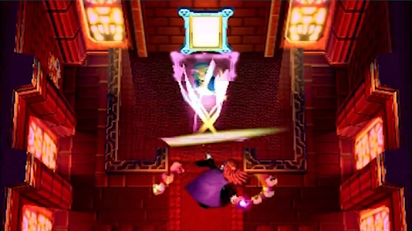 Move to the centre of the room to find Seres, her father and an evil character named Yuga. The latter says he's travelling round the world looking for perfection, and he has decided to kidnap Seres to add her to his collection. He casts a spell to capture her inside a painting, then he notices that Link is here. Being very courageous, Link hurls himself at the sorcerer, but only succeeds in hitting the wall and seeing stars! So the sorcerer laughs at him and leaves looking for his next victim. The priest then says that Princess Zelda must be warned as soon as possible...