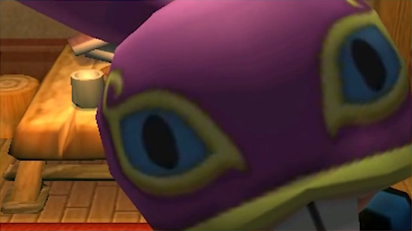 Later on, Link is in his bed and this time he is woken up by a weird character named Ravio. He is a traveling merchant who found Link unconscious at the Sanctuary and brought him back to his house. After having explained what happened, the merchant urges you to go to the castle to report these events, but he still asks you to let him stay for a few days in your house. Say yes, Ravio thanks you and gives you Ravio's Bracelet, a very rare object according to him. Despite its unpleasant odour, he asks you to wear it. Go out. Jump to the right, go north, then go west to the castle. 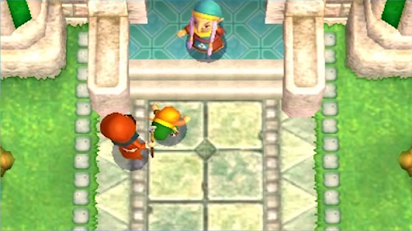 Cross the bridge, then enter the castle's courtyard. Talk to the soldier who is swinging a sword. He tells you that this is the "Spin Attack" and teaches you how to perform it. Next, talk to the soldier near the door, but despite your explanations, he won't let you enter. Fortunately the door opens and Lady Impa, intrigued by your story, asks you to follow her. Follow her inside, then, while waiting, look closely at the paintings on the wall. When Impa says that the princess is ready, go upstairs and join her. 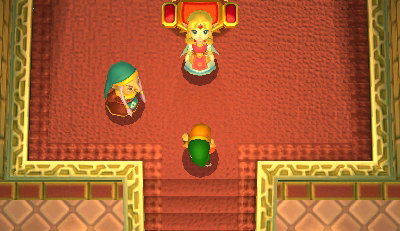 Princess Zelda welcomes you and says that she's having the same dreams as you. After having told her about Seres and the captain's capture, Impa and her wonder whether Sahasrahla should be consulted. This elder lives in Kakariko Village and his house is marked on your map. Then Zelda decides to entrust to you her charm passed on from generation to generation in her family, and asks you to meet Sahasrahla to let him know what happened. Leave this room. Before leaving the castle, you can take time to talk with the soldiers who will tell you about a milk bar and a fortune-teller. Talk also with the man in the gallery who says that these paintings represent Hyrule's history and that the descendants of the Seven Sages still live in Hyrule, Impa being one of them. 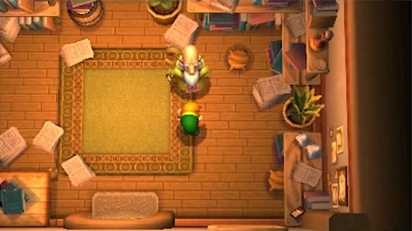 Go west and in front of the blacksmith's forge, talk to Gulley's mother who is looking for her son. Continue west to enter KakarikoVillage. Talk with the inhabitants and enter the houses to visit the village, but most of all, go inside Sahasrahla's house north of the village. After having told him about the recent events, tell him that you don't know the legend of the Hero and the Seven Sages so that he relates it to you. Sahasrahla also says that Seres is the descendant of one of the Seven Sages, who sealed Ganon many years ago. He wonders whether Yuga, who is after the Sages' descendants, is not trying to free Ganon... He informs you that a strange man has been seen near the Eastern Palace, so he has sent his pupil Osfala to investigate, being himself one of the Seven Sages' descendants, as well. 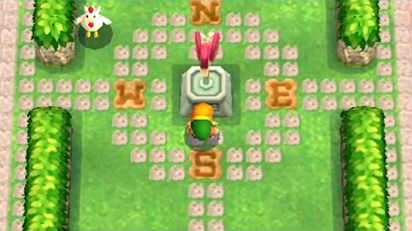 In the Item Shop, in the west part of the village, buy a Shield if you own at least 50 rupees. In this shop is an old man who tells you about StreetPass, if you are interested. In the south part is a woman who breeds cuccos and just beside is the Milk Bar. At the centre of the village, enter the house of Mr Bee Man. If you have a Bottle, he lends you his Net! Don't forget to activate the weather vane before leaving the village by east. 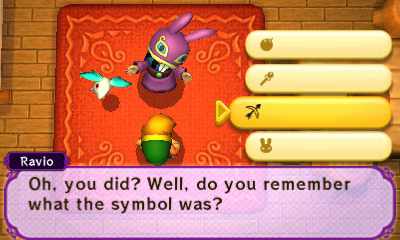 Walk past Hyrule Castle again, go south, then east and cross the bridge.

Continue east, then go north. Get rid or avoid the red enemies (Octoroks) as you head north. You see two kinds of switches on pillars, symbols on stone pedestals, as well as two signs written by Ravio. As you cannot reach the entrance of the palace, go back home and talk to the merchant. When he asks you if you noticed symbols, select the bow icon in the list. Then he lets you have the Bow for free but will take it back if you lose all your hearts. As you leave, you see that you now have an energy gauge.

Go back to the region of the Eastern Palace and walk the steps next to the symbols. Equip the bow, shoot an arrow at the right switch and another one at the left switch, which opens the door. Go through this door, then move east and walk up the stairs. You meet Osfala and tell him what happened, but he doesn't take you seriously and decides to enter the palace. Touch the weather vane and enter the first dungeon of the game.