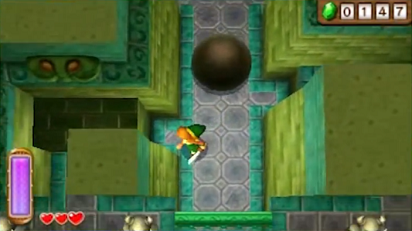 Go right, step on the pressure plate to open the door and move on. Grab the rupees, then go back south. Fire an arrow at the north crystal switch which covers the pit, then go through the door north. Look left and shoot an arrow at the switch to open the left door. Walk back, go through this door and open the chest for 20 rupees. Take the central path to the north again and also the next one. Walk down one of the stairs, move on while avoiding the large balls, then turn left and take the way to the left. 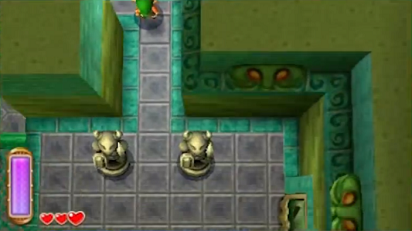 Get rid of the plants to open a door. Proceed in the hidden passage situated under the chest, go south, step on the plate and open the fallen chest to claim 20 additional rupees. Go back north and take the southwest path. Climb the steps up, follow the path to the north and open the chest to find a Compass which indicates the location of important items in dungeons. Go back south, then step on the pressure plate and move on east. Cross the metal bridge, step on the north plate to open a door, then head east. Walk on the moving platform, fire an arrow at the left switch when you are down, then quickly fire an arrow at the right switch when you are up and rush to the chest which contains a Small Key! Go left, climb the steps up and unlock the door. Go upstairs... 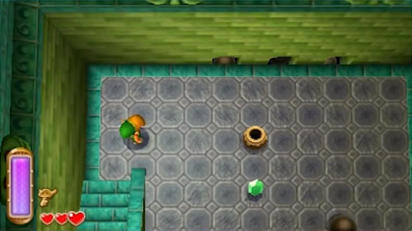 Step on the floor switch at the centre and fight the four Armos statues, which causes a warp portal to appear and two doors to be unsealed. There are now two possible choices; I made this one:

Head right. Move on carefully while using the Shield (if you bought it) to protect yourself from projectiles. Go right, climb the steps up, walk on the narrow path and get rid of the plant, then go south and step on the plate to open the nearby door. Jump right, get rid of the second plant, which causes a chest to appear, then open this chest to find some monster guts. Go back south and go through the door. 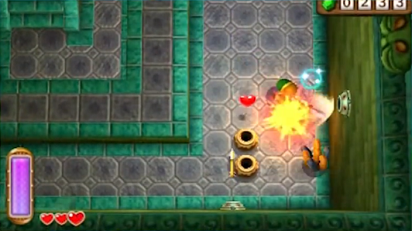 The second choice is:
Head left, step on the plate on the left and climb the steps up. Head right while avoiding the large ball, then climb the steps down. Step on the central switch, then as soon as the steps have moved completely to the right, run on the plate hidden by these steps so that a chest will fall. Open it to find some monster guts, then walk on the plate in the southwest corner to unblock a passage. Take this passage towards southeast.

If you chose the left way (2nd choice): Cross the room to the northeast corner before reading what follows...
Look left right away and shoot an arrow at the crystal switch to activate a platform, then walk on this platform and fire another arrow at another switch to the north to open a door on the right. Take this path right. 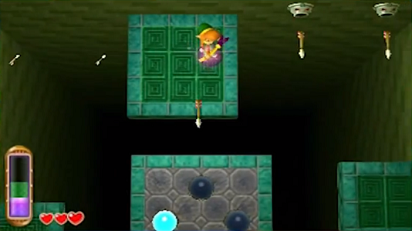 Start by having a look at the room to notice four crystal switches in the centre, then move to one of the platforms and, while avoiding the projectiles, shoot arrows at the four switches to activate them. Don't hesitate to break pots to recover a few hearts. A chest appears on the right and projectiles stop. Go to the chest and open it to get a Small Key. Go back left to the previous room. 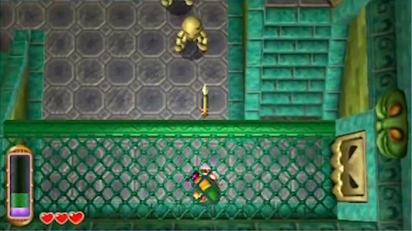 Take the central path to the large boss door and fire an arrow at the switch to the left to activate a platform. Walk onto this platform, then unlock the door and go through. Defeat the three skeletons using spin attacks or the Bow, which will cause a platform to move down and a door to open. Open the large chest to get the Big Key. Climb the steps south, take the right path and strike the switch, so that a platform will move down in the nearby room. Go back to this room on the right, step on the platform-elevator and shoot an arrow at the switch to the north which is now reachable. This gives access to the boss door. Come close and unlock the boss door. 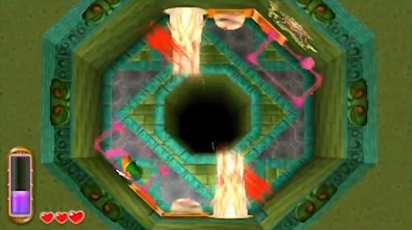 You enter the room as the sorcerer Yuga is mistreating Osfala. He then captures him in a painting in turn! Yuga starts by sending guards to you; defeat them with the sword, then as soon as the sorcerer goes out of the wall, stand in front of him and shoot an arrow. If he's hurt (he shuts himself away), rush to him and strike him with the sword, then repeat this tactic until he gives up. But then he casts a spell on you that turns you into a drawing on the wall and says he will be going after Princess Zelda next! Thanks to Ravio's Bracelet, you are able to exit from the wall! This item provides its bearer with the power to move on the surface of walls! 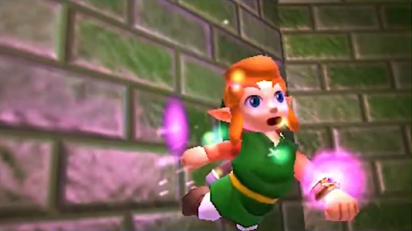 Collect the Heart Container, then stand on the right of the slit in the north wall. Use the bracelet to transform yourself into a painting, enter this slit, then proceed left and exit from the wall on a balcony. Break the pot to find an energy potion, then merge again, move quickly to the right and emerge from the wall. Smash the pots to find another potion, then merge yet again, cross quickly to the left while collecting rupees and exit on the right. Open the chest on the right which holds 100 rupees! Then break the pots to find another potion. Cross back quickly westward, then move onto the platform-elevator and step off. 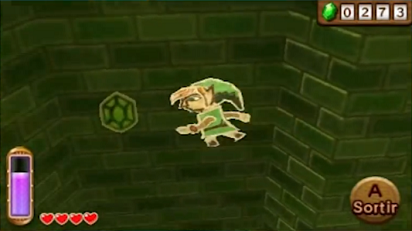 Move a little, then use the power of the bracelet several times to proceed right on the wall and on the platforms, and continue to the right.

*** If you die in the palace, start the game in your house and talk to Ravio to get the Bow back for 10 rupees. Go back into the dungeon and enter the warp portal to return to the second floor. 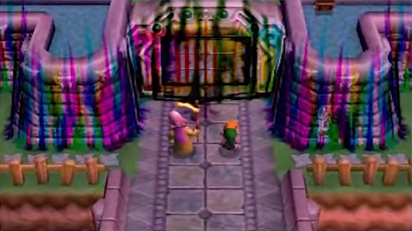 Sahasrahla is there. You tell him that Osfala has been captured and Zelda is Yuga's next target, then you go back together to Hyrule Castle which is now surrounded by a magical barrier. The wise man says that the legend tells about these recent events and that the Master Sword can free the castle from this evil power. Only the Hero who found the three Pendants of Virtue is worthy of the blade. You already possess one of them, the Pendant of Courage, given to you by the princess. The other two can be found in the House of Gales and in the Tower of Hera, marked on your map by Sahasrahla. Then the old man decides to look for clues to find out who the other descendants of the sages are.