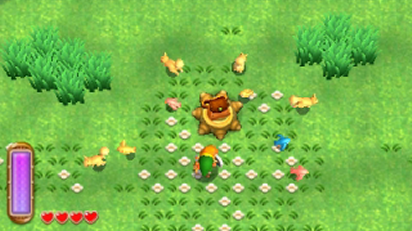 Go back to your house and talk to Ravio who is surprised to hear that his bracelet is magical. For the fun of it, merge into the wall and move behind the Majora's mask, and on the left wall, get a rupee by walking behind the painting of a rupee. Leave and take a few steps towards the southwest. You meet again with Gulley's mother who is still looking for him. Talk to her, then go west a little, slash the bushes to the north and continue north to enter a large clearing. Walk near the stump at the centre and pick up the Pouch. The housewife says that she made it for you and lets you keep it. Continue west. 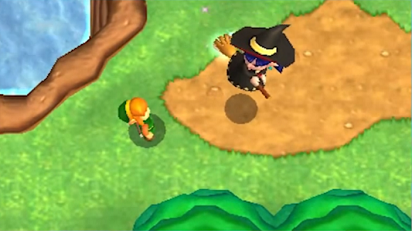 At the centre of the village, near the weather vane, is a street merchant who sells and buys various things. Buy the Bottle for 100 rupees. If you didn't buy the Shield previously, get it now in the shop in the northwest part. Next, leave the village by the north way. You should see a witch flying on a broom for the second time. This time she comes near and introduces herself: Irene, best witch of her generation! Following a prediction, she decides to help you and gives you the Bell, useful to call her anytime and be able to travel quickly to a weather vane you activated. She adds that her grandmother is a world-class potion brewer and owns a shop behind the Eastern Palace. 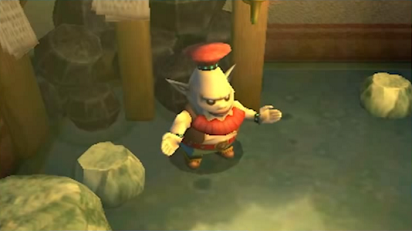 A tent of some kind can be found north of Kakariko Village. Go inside to meet the fortune-teller who gives you the Hint Glasses, which allow you to see the Hint Ghosts who haunt Hyrule. Further north, east of the large forest, enter the lonely house. Rosso, a miner, proposes to crush rocks to clear out his ground. As you aren't strong enough, he gives you the Power Glove which allows you to lift small rocks! Outside pick up and smash all the rocks around his house, then come back inside and open the chest holding 50 rupees. Use the Bell to call Irene and choose your house. 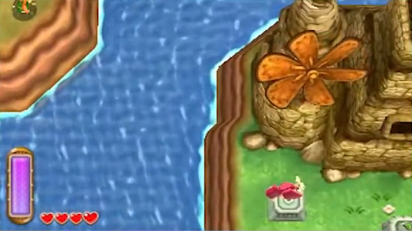 From there head southeast in an area with a huge lake. Go south and walk on a big trunk. Talk with the young man. Look east with the buttons "cross" to see a building, then talk to the man again and say that you can see it. Then he tells you that it can only be reached if you swim there and that he learned with the Zoras, whose village's location he marks on your map. Leave this area, go north, cross the bridge, continue north, then branch east.

Northwest of the Eastern Palace you can see a lonely house. This is where the Old Witch lives, the potions saleswoman. Touch the weather vane nearby, then go inside. Look at the potions to note that she asks for certain ingredients in exchange, except for the red potion which costs 50 rupees. If you own a bottle, you can buy some, if you wish. 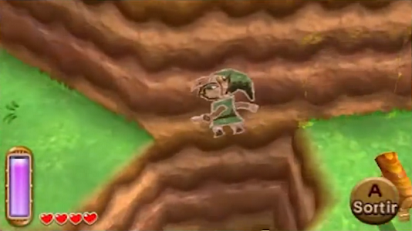 Leave, go right again and talk to the strange creature. He says that the bridge has been destroyed and that the Zora's Domain is not accessible anymore. Go near the wall, turn into a painting then move left to pass the water. Continue northeast, then northward until you are facing a wall. Look at the sign on the left which says "deep water nearby", then walk towards the waterfall to the north. A shady man suddenly appears then runs away! Next you hear a voice behind the waterfall. Go through to arrive to a cave with Zoras. Talk with the three small Zoras who say that the smooth gem, secret of beauty of their queen, has been stolen and is of great value. 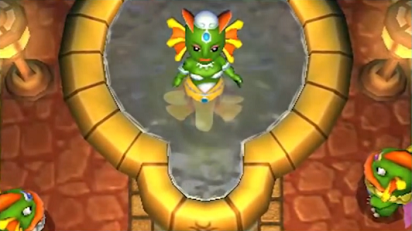 Leave the cave, ring the bell to call Irene and ask her to take you to the Kakariko Village. Go left and go near the street merchant. He proposes a smooth gem... Pay 200 rupees to get it. Head north and notice a man running away. Follow him outside the village, then come back and talk to the small boy who says he has tried to approach him without success. Turn into a painting on the wall on the left, move left and exit just behind this fast man. When telling him about the smooth gem, he says he sold it to the street merchant and has already spent the money. He adds that he is out of control since he's wearing boots, that he can commit thefts without being caught. To make it up, he hands you his Pegasus Boots!

Call Irene again and choose the Old Witch's house. Go back to the waterfall and enter the cave. The Zoras see that you have found the gem. Throw it into the pool and Oren, the Zora Queen, gets back her normal look. To thank you, she gives you the Zora's Flippers! Thanks to these flippers, you can now swim and dive. 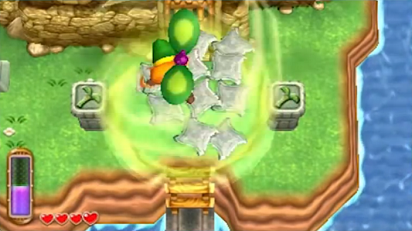 Go outside, head south, dive to pick up a red rupee and go down the two waterfalls. Enter the cave behind another waterfall and find a Piece of Heart! Afterwards, go out, swim west, then to the south and get back to land on the right. Continue south, cross the bridge and head south, to the lake area. Jump into the water, swim south to the island and climb back to land. Notice the symbols on the stone pedestals, touch the weather vane then go back home.

Ravio has settled in and opened a large item shop! In exchange for the loan of your house, he proposes to lend you gear. Look at the available items and choose the Tornado Rod for 20 rupees, which represents the symbols that you saw at the lake house, as well as the Hammer which is on sale at 20 rupees. You can also rent other items, like the Bombs or the Boomerang. Have a look at the big bag in the southeast corner, but Ravio asks you not to touch it. Leave and call Irene to fly back to the house in the middle of the lake.