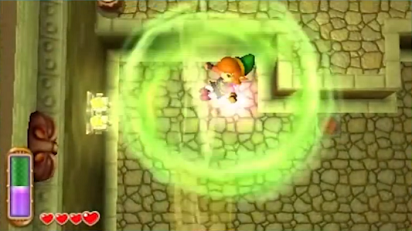 Once at your destination, stand between the two pedestals, use the Tornado Rod, then step on the switch which appeared and enter the mill.

Smash the pots, step on the hidden floor switch which activates two fans, then walk in front of one of them and use the Tornado Rod to fly in the air and be blown northward. Proceed in the next room, jump on the right and hit the crystal switch which lowers a platform. Go through the door to the north, turn into a drawing where there is a green rupee, then go left and exit from the wall after having passed the pit. Take the path at the far northeast of this room. Get rid of the plants, hit the switch which stops the fans then open the chest holding some monster guts. Go back west. 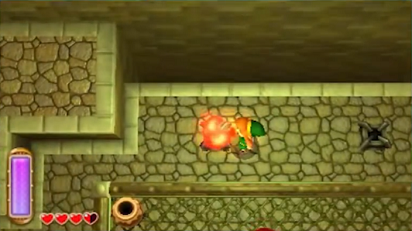 For 30 additional rupees, merge into the small wall which faces the last passage, then go right to pick up a red rupee and two blue rupees before coming back near the same passage. Cross again thanks to the wall where there were green rupees, then climb the steps up to the north and light the two braziers, which causes a chest containing 20 rupees to appear. Come back to the south of this large room, where you entered, merge into the wall to the north (the activated crystal switch is on your right), walk right passing over the doorway, then go out and take the path in the northeast corner.

To defeat the fire skulls, aim the Tornado Rod next to them, then slash them quickly three times. Open the newly appeared chest to get a Small Key! Go back in the large room, cross thanks to the wall, then unlock the door in the southwest corner. 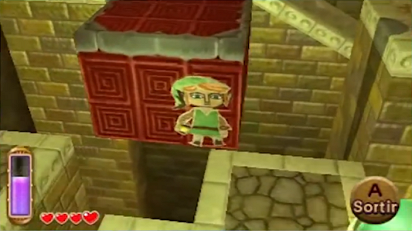 Head left, turn into a painting when the block is in front of you, then exit from the block when it moved to the far right. Open the chest to get the Compass! Merge into the wall where you can see a green rupee, go to the far left and emerge. Merge again when the block gets near, move with it, then exit on the other side. Climb the steps up to the south, merge into the moving block then exit to the north. Merge into the second block and emerge to the right, then step on the floor switch which activates the fan. Take the path to the east.

Head south and walk on another switch which activates another fan. Go near the north edge of the metal platform and use the Tornado Rod to reach the metal platform further to the north. Break the pots to get an energy potion, then take a few steps left, turn into a painting, go right, then take the path in the northwest corner. 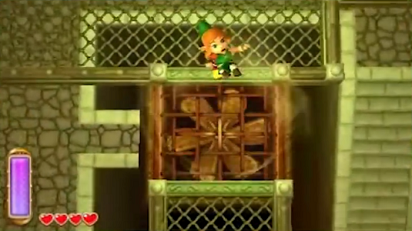 Watch out for the rats, proceed carefully on the narrow path to go south and east. To obtain two hearts and a blue rupee, merge into the wall, move right to get these three things, then backtrack. Jump lower, climb the steps up and take the path southwest.

Turn into a painting, go left quickly and exit at the other end. Open the chest to claim 100 rupees! Merge into the south wall, move left and emerge. Use the Tornado Rod to fly northward, then take the path to the east again. Move southeast a little, and fire an arrow at the crystal switch on your right, which activates another fan. (If you don't have the Bow anymore, fly to the north, go right and merge into the wall to get near and strike the switch.) Use the Tornado Rod to fly to the north, take a few steps on the right and throw yourself in the last fan which takes you directly to the... 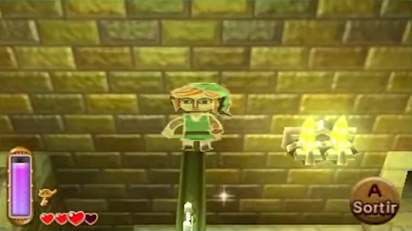 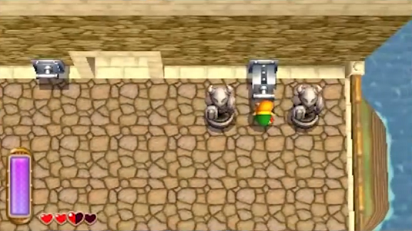 Go right, jump and continue right. Grab the lever and pull it as much as you can to make a big chest fall. If necessary, use the rod to put out the flames, then open this chest to find the Big Key! Defeat the four Armos statues while flames appear, then merge into the wall to break through these flames on the right. Take the path to the north, return to the large room to the west and take the path leading south again.

This time, jump to the left, grab the lever and pull it as much as you can to activate a small metal platform. Next, stand in front of the lever in the middle (on the same level), then, when the small platform comes near, use the Tornado Rod to fly on it and reach the metal platform nearby! Stand left of the locked door, merge into the wall, then move left and exit on the metal platform. Step on the floor switch, which causes a key to fall, then turn into a painting again, go right and exit next to the door. Jump near the flames, use the Tornado Rod to blow them out temporarily and quickly grasp the Small Key. Use the rod again to fly on the small platform and unlock the door. 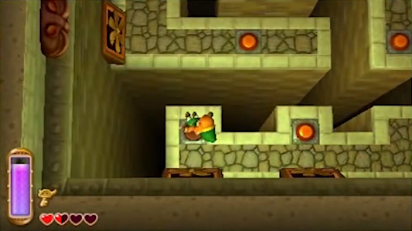 Beware! Two fire monsters show up! Use the rod to put out the flames on one of these enemies, then slash it as much as you can while he is "out". Repeat this tactic as many times as necessary until they're defeated. A warp portal then appears and the next door is unsealed. Head northeast. Go right, climb the steps down northward and take the path west. 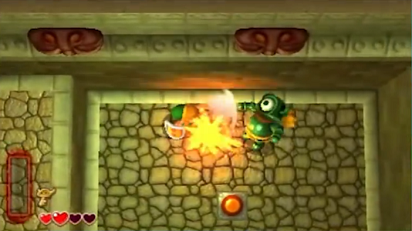 Step on the floor switch at the far left which activates a fan and takes you to the north. Walk on the switch on the left, which activates another fan and makes you fly to the right, then step on the north switch, which makes you fly even further to the right. Take the path to the east which brings you back in the large room and continue east. Next go south and step on the switch, which stops the fans in this room and in the left one. Go back north, then head west, climb the steps up to the south, break the three pots and jump to the south. Continue right, climb the steps up, go right, up, and take the path east.

Climb the steps up northward, jump to the right and get rid of the one-eyed enemy. Walk on the switch which activates a platform, then fly on this platform thanks to the Tornado Rod. Shoot an arrow at the crystal switch to the left, then move on the metal platform to the south and jump in the fan which takes you to the... 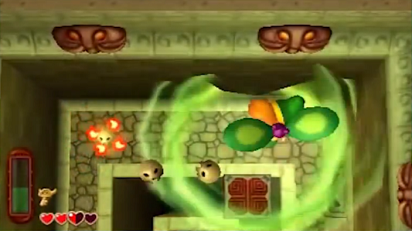 Head south; you are pushed by the fan. Turn into a painting, head right past the gust of the fan and exit from the wall. Climb the steps up and take the path to the west. Defeat the cyclops, then light the two braziers to open the door and go west.

Go down one level and get rid of the fire skulls, always with the aid of the Tornado Rod. The next door is unsealed and a chest appears to the south. Take the path northeast, walk south, then turn into a painting and go left to reach the other side. Take the path to the east. Climb the steps up, open the chest to get a Small Key, then go south and take the steps westward again.

Go back to the room to the west, open the chest which holds 50 rupees then go back east. Unlock the door, then get on the moving platform and stand on the north edge. When it starts to move back, use the Tornado Rod to take off and fall back on the next platform, then get off in front of the boss door. 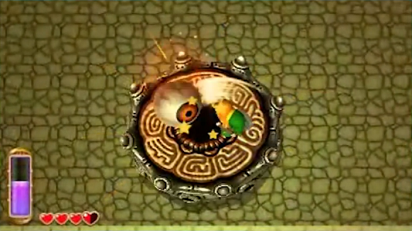 Jump on the floor; the boss shows up. Use the Tornado Rod to land on him, then slash his eyeball quickly several times. You are then knocked to the floor and his body gets taller. Use the Hammer to hit the floor twice as you stand close enough to him or fire arrows so he gets back to his initial size. Use the rod again to fly back on him and slash him again. After being knocked once more, his body gets even larger! Use the Hammer again four times or fire arrows, until his eye is visible again, fly on him and continue slashing him until he is defeated.

Pick up the Heart Container, then take the Pendant of Wisdom.

*** If you die in the palace, start the game in your house and talk to Ravio to get the Tornado Rod back, the Hammer and possibly the Bow. Go back into the dungeon and enter the warp portal to return to the second floor.