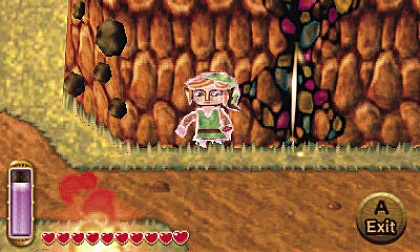 Return to Hyrule, either by calling Irene as soon as you exit the temple, or by leaving this region and entering the fissure already used.

Go back home, Ravio has some news for you. Next, go out and enter the fissure just below your house.

Lorule
Head west again to the Bomb Shop, then continue northward to where the Kakariko Village is in Hyrule. 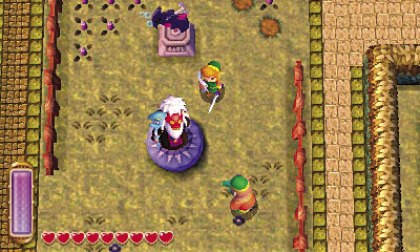 You enter a village in ruins. Go inside the first house on the left and talk to the milk bar owner and the customers. The bard says that the boss of the village likes paintings, that he found one that he hid and that a thief girl knows about it. Talk to the woman on the right who says that she's a regular visitor of the Treacherous Tower, which can be found on top of Death Mountain. Go out and head northwest. Talk to the masked elder and to the man nearby, then touch the weather vane close by. Enter the shop to the north, look at the items and talk to the bag guy. He says that a thief girl knows where the boss hid an important thing and that she's locked up somewhere. Enter the house at the centre of the village and talk to the veteran thief. Go out and go near the two gargoyles in the northern part of the village. Look closely at the left one to hear a voice asking you to complete the words of a song. Choose "a narrow path" (said by the bard), "really despair" (said by the bag guy), then "to thievin'!" said by the veteran thief. Enter under the gargoyle.