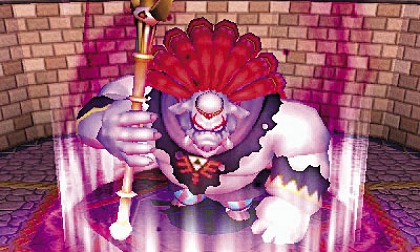 Walk on to meet Hilda! She guesses that you now own the Triforce of Courage and extracts the Triforce of Wisdom from Zelda's portrait, then she tells you about the history of her world:
"Long ago, Lorule possessed a sacred golden treasure. It could grant the wish of anyone who touched it. It was known as the Triforce in our world, as it is in yours. Many sought to control the Triforce, plunging Lorule into endless war. Our kingdom was on the verge of ruin. My ancestors got rid of the Triforce to stop the war - by destroying it. Utterly and absolutely. It was done with good intentions. But it had disastrous consequences. The Triforce was the foundation of our world, and without it, our kingdom crumbled. Chaos has since reigned in Lorule. We need a Triforce. So imagine my surprise when I learned of the existence of another one. Yours. A Triforce based on such virtues as Power, Wisdom, and Courage. To that end, I have guided your destiny, Hero of Hyrule. As the Princess of Lorule, it is my duty to save my kingdom. So I know you'll understand it when I say... I must have your Triforce of Courage!" she finally says angrily! Then Hilda takes over the Triforce of Wisdom, Yuga-Ganon appears and she orders him to seize your piece of Triforce! 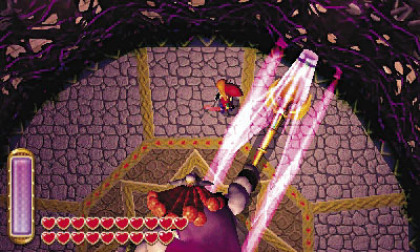 During the first phase, you "just" need to strike Yuga-Ganon with the sword as many times as you can while avoiding his attacks as much as possible. Stay mobile and watch him to avoid his trident which he throws forward or horizontally in front of him. When he fires red beams or spins his trident, run to avoid them. When the monster finally drops his trident, Hilda tells Yuga to give her his Triforce of Power to still be able to save Lorule. But actually Yuga doesn't care about Lorule at all, he wants to create his own kingdom. So he locks Hilda up in a painting and takes over the Triforce of Wisdom! Link gathers his courage to face the second phase... 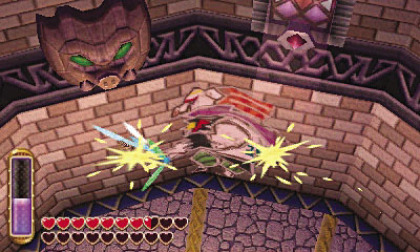 The first attack is a classic: send back his energy ball with the sword. After several exchanges in a row, Yuga-Ganon is hurt and takes refuge in the walls. At this moment, Zelda calls you and says that your weapons will be useless while Yuga is a painting. So she gives you the Bow of Light! which can only be used with the power of Ravio's bracelet. Turn into a painting in front of Yuga and fire an arrow at him, which locks him. Exit from the wall, merge again behind his back and fire another arrow at him. This way, Yuga is forced to emerge from the wall! Quickly strike him several times with the sword, then try to avoid the lightning bolts and purple magic bolts he throws at you. He then prepares another energy ball that you have to send back to him again, except that this time, he is faster! When he merges into the wall, follow him, but this time he rushes at you and stops your arrows. Exit from the wall, then merge again quickly before Yuga turns around, and fire an arrow at him so he exits the wall. Once again avoid his purple projectiles, then the third offensive starts: This time he throws two energy balls and you need to throw both back! When he merges again, he ensures that he's always facing you and stops your attacks, so fire a light arrow which will go around the room and hit him in his back! Expelled from the wall, strike him once more so he is finally defeated! 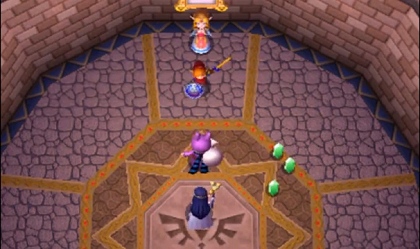 After Ganon's defeat, touch Zelda's portrait. As Hilda gets back on her feet with difficulty, Zelda says that her imprisonment is also her fault. Even if she understands Hilda's desire to save her kingdom, Hilda acted wrongly. The princess of Lorule is still angry and doesn't want to give up. This is when Ravio turns up! He says he used to work for Hilda and came to Hyrule to get the help of a hero, because he couldn't stand up to Hilda and Yuga. He adds that he wanted to save his kingdom but without sacrificing Hyule's, and also to save Hilda from her desire for the Triforce. Hilda then realises that she was wrong, Link deserves the Triforce of Courage and she will send him back, as well as Zelda, to Hyrule. She also confesses that she and Yuga had plotted a scheme to steal the Triforce. Link gives Ravio's bracelet back so Hilda can send them back to Hyrule. 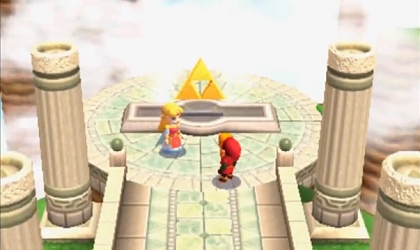 Once arrived in Hyrule, princess Zelda proposes to have a closer look at the whole Triforce. Follow her to the reconstituted Triforce in the Sacred Realm of the Hyrule kingdom. Having reached the end of the path, talk to Zelda again. Together you decide to make a same wish, then touch the Triforce. The latter flies away and arrives in Lorule to save Hilda's kingdom! Very touched, the princess of Lorule thanks the princess of Hyrule and the hero Link.

After the credits, Link puts the Master Sword back in its pedestal in the Lost Woods...