Even more Tips and Tricks

Here are some additional tricks and fun facts:

The Last but Least Useful Tricks 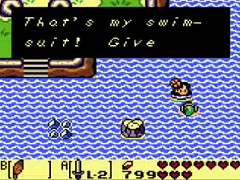 Differences between Black-and-White and DX versions

In the Japanese and European black-and-white version, the mermaid doesn't lose a Necklace, but a Pink Bra, and she flees when you dive near her, calling you a nasty boy. Then all the DX versions followed the less racy American one, replacing the Pink Bra with a Necklace.

If you use certain names...

You probably already know that on the file screen, if you type "ZELDA" as your name and press "start", the music changes. Indeed, there are other magic names:

You hear a remix of the main theme by typing:
* ZELDA (all black-and-white versions)
* LOLO (French DX version)
* ZELDA (other DX versions)

And you can hear another theme by typing LOLO in the French b&w version, and even another one by typing MOYSE in the German b&w version!