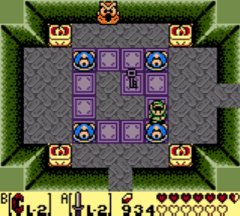 With at least 10 Magic Powder units in your pouch, talk to the ghost on the left, answer his riddle by choosing "blue", then talk to the other ghost and this time say "red". (On Switch, there's no more riddle, but you can buy Magic Powder to the blue ghost.) Go up, get rid of the enemies, then go right and blow up the bottom wall. Fill your wallet with 140 rupees!, then come back up and go right twice. 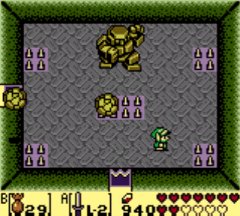 Go right twice, up twice, then hit the spheres once more (bottom right, top left, top left) and pick up another Small Key. Go right, unlock the door with the Small Key and go up. To beat the Giant Buzz Blob, throw some Magic Powder at it, then swing your sword at it and repeat this several times. Pick up the small fairy, then go on to the left, push the blocks to pick up the Nightmare's Key in the chest, then go back right and down.

Get rid of the enemies, go left, down twice, left and open the door with the Small Key. Go up, and use your sword to beat the mini-boss Stone Hinox while avoiding the rocks it throws at you. Grab the small fairy, go on left, toss the pot in the top left corner, step on the switch, then go up, clear out the enemies and pick up the Map in the chest. 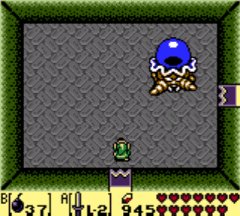 Go right, put the enemies in their respective holes, then pick up the Small Key and go back left, down and left. Once more hit the spheres so they turn blue: middle, right, left, top, bottom, middle. On Switch: centre-left + centre-right + down-centre + up-centre. Go up, toss the pots to get a fairy, unlock the door with the Small Key and go left. Walk down, shoot the Hookshot at the crystal (or simply hit it), then unlock the Nightmare's lair.

To defeat the Giant Hardhat Beetle, hit its ball several times and quickly so it progressively changes colour until turning red, and breaks. After the warping whirlpool has appeared, go right. Talk to the Fairy Queen who congratulates you and ask you to choose between more offensive power or more defence power. It is yours to choose to get either the Red Clothes or the Blue Clothes. (On Switch: Powerful Red Mail or Sturdy Blue Mail). You can also come back later to see the Fairy and change your outfit.

Leave the Graveyard from the west, step on the warp hole to get to the Animal Village and go back to the west. Before getting into the next temple, you can look for 20 Secret Seashells to get a new weapon.