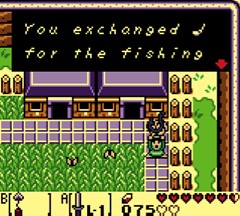 Go to the Animal Village, speak with the goat in her house and she will give you the Letter. Then head for this strange man's house, northwest of the Mysterious Forest to get the Broom. Go back to Mabe Village, towards the houses to the south and talk to the old lady. (If she isn't there, she's in the Animal Village).

Upon receiving the Fishing Hook, go southeast of Catfish's Maw, swim and dive under the bridge, then jump on the fisherman's boat and talk to him to get the Necklace. Keep on swimming north and give back the Necklace to Martha the Mermaid to receive the Mermaid Scale. At last, get out of the water, go south of Catfish's Maw (by taking the eastern path), next to the mermaid statue and look at it to put the Mermaid Scale back to its place. Get in the underground cave and pick up the Magnifying Lens! 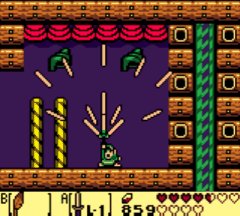 Thanks to this Magnifying Lens, you can get a new item. To do so, go to the Toronbo Shores (E16), blow up the cracked wall and trade any of your items for the Boomerang. You can also come back later to get this item back. (Once you have the Level 2 Sword, you won't need the Deluxe Shovel anymore until the end of the game). On Switch, it's possible to buy the traded item back while keeping the Boomerang. The Boomerang is really powerful, most of the enemies are weak against it! 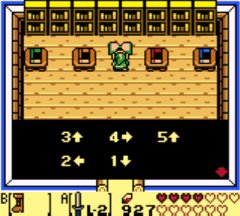 Go back once more to Mabe Village and get into the Village Library (A12). Wear your Pegasus Boots to make the book fall from the shelf and read it (write down the directions). Also read the book to the bottom right (write them down as well), then get out, head to the Graveyard and look for a place with five tombstones (H8).

The first being the one at the bottom right and the following ones going clockwise, push the tombstones as written in the book (first tombstone down, second to the left, third up, fourth to the right and fifth one up). Go down the stairs to get in the...