Go twice to the left and get rid of the enemies (for the red ones, hit their back or throw a bomb at them) to unblock the door. Go left again, pick up the Compass in the chest, fight off the enemies, then go down the stairs. Go through the underground tunnel: in the first screen, you can use the Pegasus Boots with Roc's Feather from the ladder, in the second screen, use the Feather to jump from one platform to another while waiting for them to align.

Cut the blue crystals, then push the two blocks to form a square and pick up the Small Key. Take the stairs again and go back to the right. Open the door with the Small Key, go up, left, get rid of the enemies to unblock the doors. Go on to the left and clear out other enemies to make a chest appear. Pick up the floating bombs and the Stone Beak in the chest, then go back to the right twice, and go up. Read the owl's clue, fight the enemies and go up.

To defeat the Stalfos Master, hit it with your sword until it curls into a ball (the whirling blade technique works well!). Then quickly drop a bomb on it and do this twice more. Go right, open the chest to see that the Stalfos Master stole the dungeon's treasure and throw some pots to find a small heart and some bombs. Go up, push the block, go left, quickly come back to the right, push the block and go up. Quickly go back down, step on the switch to unblock the door, push the block and go right.

The Stalfos Master is back, fight it like you did previously and he gives up again. Go back to the left and go up. If you ever need bombs, go right, take them and come back. Go up again, left, and get rid of all the enemies (push one of the central blocks if you need to). Go up, fight the Stalfos Master for the third time, then go left and pick up the Map in the chest. Go back to the right, down, right and down.

Go down, push the block in two stages to keep going down, then go left, down three times and left. Take back the stairs, go through the underground tunnel, go left and fight the Stalfos Master for the last time! At last, you are rewarded with the Hookshot! Play Manbo's Mambo to get back to the temple's entrance, then go left twice, go right (up) and shoot the Hookshot on the chest to get dragged over there. Pick up the 200 rupees (100 rupees on Switch), then fire the Hookshot on the block to come back left.

Go left, up twice, right, up, left and up. Dive in the middle of the pond, go through the underground tunnel while avoiding or hitting the octopus, then use the Hookshot on the hook to create a bridge and pick up the Nightmare's Key in the chest. Take back the stairs, go back through, go down, right and up. Jump upward, shoot the Hookshot at the block to the bottom right, then at the chest. Pick up 50 rupees, then go right, pick up the Small Key in the chest and go back to the left. 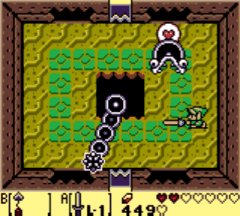 To defeat Slime Eel, you mostly have to be patient. Quickly go to a corner of the screen (i.e.: the bottom right) and wait for it to get out from the top right corner (according to this example). Each time it gets out from this place, stand right in front of it, shoot the Hookshot to draw it at you and hit its pink heart several times with your sword. Do this four to five times. Sometimes it will be completely drawn out, stay away because it will create a blast. Then, pick up the Heart Container, go up and pick up the Wind Marimba. 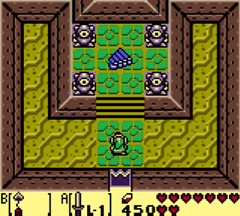 FYI: This temple withholds a room with two Skulltulas (that you can defeat with either the Bow or the Hookshot) and another Small Key, but you don't need them to get the instrument.

If you want to, you can now go and finish the trading sequence. If you want to do this later, click here to go on with your quest, otherwise...