A little trip with a ghost 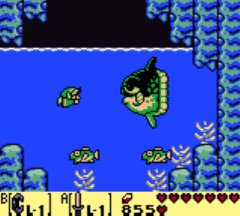 Upon leaving the dungeon, go right three times and enter the cave. Dive to find a Piece of Heart, then get out and go left four times. Enter the cave, talk to the Moon Fish to learn Manbo's Mambo and get out. This music will automatically bring you near Crazy Tracy's house where you can buy secret medicine. On Switch, you can also travel to a warp point of your choice.

Play Manbo's Mambo to leave this area and soon a ghost will appear, asking you to bring him to the House by the Bay (G16). Bring him towards south going through Mabe Village, then through Toronbo Shores up to a lonely house next to a cliff. After visiting his house, he decides to go back to his grave. Play Manbo's Mambo to save some time, then go down twice and left (E7). After bringing the ghost to his grave, he will inform you that there is a present waiting for you in his house. On Switch, he will give you a Fairy Bottle. 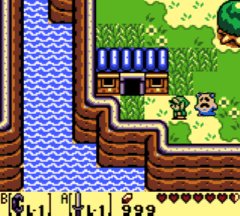 Right after that, the Owl will inform you that your next mission takes place in the Martha's Bay. If you have 980 rupees or more, go to Mabe Village and buy the Bow in the shop, otherwise keep it in mind for a later time. Buy some bombs as well if you have less than 10 of them.

Go back to the House by the Bay, toss the pots and pick up a Secret Seashell. Go on to the right and go through the gap, go up and right (to the top). Go down in the lake, swim to the right and stand to the left side of the temple's outer wall. Dive there, then swim and surface inside the walls to reach the entrance of...