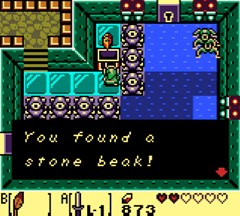 Go left, up twice, right, up and pick up the Map in the chest. Go back down, go through the gap with your Pegasus Boots and Roc's Feather and go on to the right. Blow up the cracked block, push the other one and pick up another Small Key in the chest. Go up twice, blow up the cracked blocks, pick up another Small Key in the chest, then go back to the room where you found the Compass (up and right from the hall). 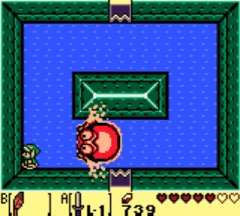 Unlock the right door, then the top one and go up. Go through the hole, go up and unlock the block. Push another block, go left and get rid of the gels to make a Small Key fall into the water. Go down, read the owl's clue and go down again. Head left twice, up twice, right and pick up the Small Key in the chest! Then go back left, down twice, right twice, up twice and open the top door. To defeat Cue Ball, hit its rear end several times optionally using your Pegasus Boots. After the whirlpool has appeared, go up.

Go forward immediately, then pull the lever as much as you can with the Power Bracelet to quickly go left. Pick up the Flippers in the chest, get rid of the enemies then go down. Walk on the shiny slab, then on the following ones and remember the order in which you stepped. Go down, swim to the right, fight off the enemies if it's not already done, then go right and go down the stairs. Go left, pick up the Small Key which had sunk and get out.

Go down twice, pick up 50 rupees in the chest, throw the pot to get a Small Fairy, then go back up twice, left, down and left. Swim to the chest holding another 50 rupees, then go right, up and left twice. Get rid of the enemies, then walk on the slabs in the order that you previously took note of.

Take the new stairs, go ahead a bit, draw back when the block is falling and go ahead when it's going back up. Go on up to the bottom of the ladder, go towards the block, draw back, quickly climb the ladder with your Feather, jump on the block, then jump to the left to get out. Go down, pick up the Nightmare's Key in the chest, then go back up and jump down towards the top. Go right, step on the switch to unblock the door, and go ahead. Unlock the block, take the stairs and go through the underwater passage. Go left, push the block, unlock the Nightmare's lair and go down the stairs. 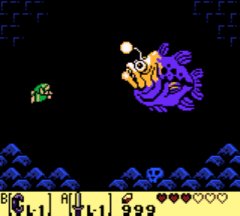 Swim to the bottom of the water to meet Jellyfish (Angler Fish on Switch). To defeat it, you just have to hit it with your sword around ten times while avoiding the rock falls and the small fish (or hit them). Immediately dash towards it and the fight will be an easy win. Pick up the Heart Container, then go back to the previous room, go up and pick up the Surf Harp.