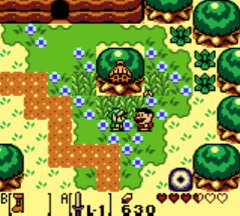 Upon leaving, the Owl informs you that the next part of your quest takes place in Yarna Desert, southeast of Koholint. But first, you have to continue the trading sequence. Reach the path leading to Kanalet Castle, then go right, up, climb the stairs, go left and up. There you should meet Tarin next to a tree with something within its leaves (H9). Speak with him, give him your Stick and he will make the Honeycomb fall so you can pick it up.

Drop a bomb against the cracked wall to discover a Fairy's Fountain, then if you still have some bombs, go down, blow up the huge rock, go right and up, otherwise, keep on going southwest, get past Richard's Villa and get back on the path leading to Kanalet Castle until you reach a Telephone Booth. Then go right, down twice and right (K11). Cut the isolated bush, go down the stairs, go through the passage thanks to the Pegasus Boots and get out on the other side of the river. 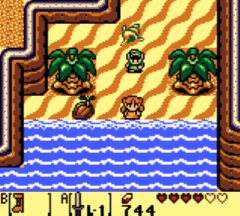 Head southeast to enter the Animal Village. Talk to the inhabitants to gather information and pay a visit to the Bear. Give him the Honeycomb to get the Pineapple, then he will advise you to go fetch Marin to wake up the monster blocking the way.

Go back to Mabe Village to pick her up using the shortcut just to the southwest of here. Get into the Dream Shrine northeast of the village. Jump in the bed, then use the Pegasus Boots to go around the room and find 100 rupees in the right chest and the Ocarina in the left one. Leave this place to get back to the village, then go to the weathercock a bit west of the village. Marin isn't here. Ask the kid, then go to Toronbo Shores, by the water to the far east. Talk to Marin, then bring her to the Animal Village through Mabe Village (and by using the warp point). Lead her south of the village, in front of the Walrus. 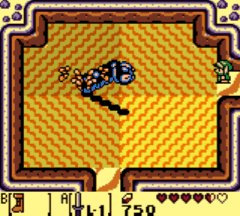 After the Walrus left, go right, then mostly north. You will soon find a sandworm in quicksand. Hit its head several times, then grab or let yourself fall to get the Angler Key. Drop a bomb against the top wall to find a Piece of Heart, then get out of the cave. Go back left, down and down (to the left). The Owl will provide you with new information for your adventure. Go south to leave the desert and go back to the Animal Village where Marin is singing for the inhabitants' pleasure.

Talk to her so she teaches you the Ballad of the Wind Fish (if you haven't already learned it). Use the warp point again to go back to Ukuku Prairie, then go towards north, walk along the Witch's Hut's right side, along Crazy Tracy's house, on the left of Igor's house, climb the ladder to the west, then go always eastwards until you can see a statue with a lock on it next to a river (on GameBoy, go up five times, right, up twice, right four times, down, up and right twice - L3). Unlock the next temple's door and then go right again to find another warp point. Go back to the far west and climb the big ladder north of Igor's house (left three times, down, up with the stairs, left twice (up) and climb the stairs - H2). 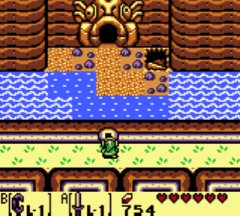 Lift one of the three rocks and get into the cave. Go right, break the crystals, push the rocks and go down the stairs. Go on to the right, take the other stairs, go right and get out. Pick up 50 rupees in the chest, go back inside, go right and get out. Go right, get into the water, and enter the cave. Take the stairs at the back, go down and get out. Go down, left and you will find an exhausted Papahl. Give him your Pineapple, and he will reward you with a Hibiscus. Get back into the cave and upon leaving, go right twice (L2). Jump down, you are right above...