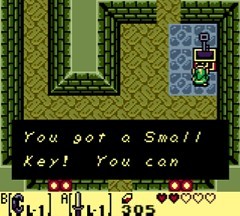 Toss a pot against the upper door, go ahead, get rid of the enemies and pick up the Small Key in the chest. Go on upwards (to the right), get rid of the gels, then go up twice and take the stairs. Open the upper door, fight off the enemies, pick up the Small Key and hit the crystal. Go back down, take the stairs, then open the now accessible chest.

Take the Stone Beak from it, then go down twice, right and pick up the Map in the chest. Take back the stairs, then open the bottom door. Get rid of the enemies by throwing bombs at them and taking care of not falling off, then pick up the Small Key and go back up. Except on Switch, you can find yourself locked in the left room, which is furthermore not mandatory (on Switch the door stays open), so open the door to the right. 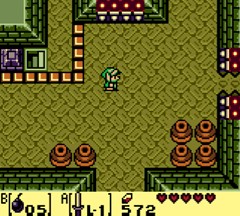 If you still want to try this part, read the following section: If you have at least two bombs, open the door to the left. Start by defeating the green enemies. To beat the remaining creatures, you have to be on the same side as them, so stand at the top (or the bottom) of the room, go through the hole with Roc's Feather and one of them should stay on your side. Go forward a little and throw a bomb at it, then go to the other side and do the same thing. (If you already have the Pegasus Boots, you can rush at them). It's also possible to quickly go across when they disappear and hit them with the sword. Pick up the Small Key. If it ever falls into the hole, exit the room, go back in and quicky catch it! Go back to the right and open the door to the right. 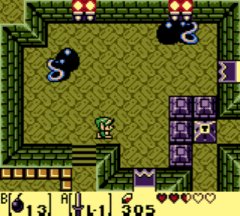 Get on the treadmills and go up the stairs. Walk around the room to draw enemies at you, hit them and pick up another Small Key. Go up. If you don't have bombs, toss the pots to the right to find some, then go up and right. Read the owl's clue, then go up. Get rid of the enemies with your sword while avoiding them when they explode. Now go left and pick up the Compass in the chest.

Drop a bomb next to the left wall, get away, then go left. Clear out the enemies throwing the pots from the south side of the fence, then pick up the Small Key. Pick up the small fairy under a pot as well, then go back twice to the right, down, left, down, then go left and get rid of the enemies. Gather at least six bombs, then go up. Make each Dodongo Snake swallow three bombs by placing them just in front of their mouth. [If you fail, go back to the first room of the dungeon, break the pots, pick up the bombs, leave the dungeon, get in again, break the pots again and go back to the Dodongo Snakes.] After the warping whirlpool has appeared, go right, push the blocks and pick up the Pegasus Boots in the chest. 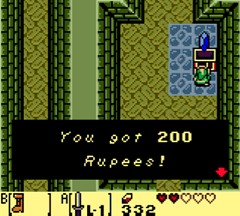 Use your boots to dash and destroy the green stones, push a block again and go back down and left. Go on to the left, rush (with the boots) into the moving creatures when you get close to them to defeat them and pick up another Small Key. Go up, get rid of the enemies to make a chest appear and go on up. Pick up the floating bombs, climb the stairs, go down and get 50 rupees in the chest. Go down, right, go down the stairs and push the block. Go up (to the right), get into the warping whirlpool, then go right.

When the current weakens, dash to the ball to destroy it and pick up the Small Key in the chest. Go back left, then go up, to the top left, dash into the stones, go on up and hit the small enemy with your sword. Go back down twice, then to the top right, up, get rid of the enemies and find 200 rupees (300 on Switch) in the new chest. Go back to the temple's entrance and get into the warping whirlpool again. 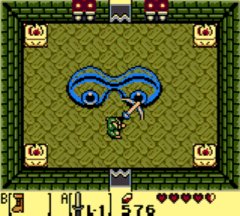 Go down, right, and drop a bomb next to the right wall. Go on, wear and use both Pegasus Boots and Roc's Feather to go across the huge gap, then climb the ladder, go across another hole and pick up the Nightmare's Key in the chest. Jump to the left, go down and left. You should now have four Small Keys. Unlock the block next to you, along with the three following ones, then go down the stairs. Dash at the huge rock to make it fall, then go through the underground passage by using both Pegasus Boots and Roc's Feather (and by holding "up" down). Get rid of the enemies, go left, fight off some bats and pick up the Small Key. Then, open the Nightmare's lair.

GameBoy version: To beat Slime Eyes, start by dashing at the wall to make the boss fall, then hit it with your sword until it's about to split. At this moment, dash at it to slice it in two halves, then choose one of its eyes, strike it and avoid it when it falls again. Repeat this twice more, then attack the remaining eye.

Switch version: Start by dashing at the wall to make it fall down, then hit several times one of its eyes until it's ready to split in two. At this moment, stand quickly facing its centre and rush with the boots to slice it in two halves. Now choose one of the eyes, strike it and avoid it when it falls down. Repeat these actions twice, then attack the remaining eye to defeat it for good.

Pick up the Heart Container, then go up and pick up the Sea Lily Bell.