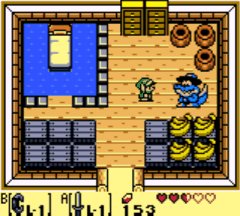 Go back into the temple, toss the pots and get 50 rupees in the chest. Finally, get out and bring back BowWow to its owner (either by going through the forest or by the Witch's Hut).

Now go buy the Deluxe Shovel and bombs if you don't already have them (you will need them for the next temple). Then go play the Trendy Game southeast of the village and pay 10 rupees to play. The point is to lead the crane to pick up the green toy. Play again if needed, then head to the Quadruplet's House to the northwest. Talk to Papahl's wife, give her the Yoshi Doll and she will give you the Ribbon. Then head for BowWow's kennel and trade it for the Canned Dog Food. Go back to Toronbo Shores, go to the Sale's House O'Bananas to the far east (D15) and give the can to the crocodile in exchange for the Bananas. You can now go back to the village and head to the Prairie by going east of the shop.

On Switch, before leaving the village, you can try fishing in its northwestern part. Fish a small fish to get a Piece of Heart and pull a Fairy Bottle up hidden behind some seaweed. At the Trendy Game, you can catch the Goomba figure and place it at Madam MeowMeow's house. 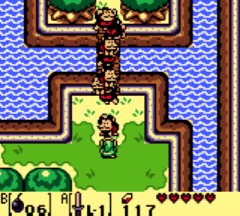 Go right to take note of the location of the first warp point, then go on to the south, walk by the locked statue of the Key Cave and enter Richard's Villa (G14). The boy will ask you to bring five golden leaves to him, spread around Kanalet Castle. Go right, then northeast using the signs to find the entrance of the castle (J8). Then go right, talk to Kiki, the starving monkey, and give him the bananas. His friends will arrive and build a bridge. Walk across it and pick up the Wooden Stick on the way, go up twice, left and cut the bush to discover some stairs. 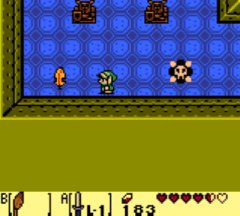 Go down and go through the underground tunnel using Roc's Feather. Once outside, go right, down and hit the enemy four times to get the first Golden Leaf. Go down, left and get into the castle. Go left, get rid of the enemies to get another leaf, then go up and right. Walk on the switch to lift the castle's harrow (open the castle gate on Switch), climb the ladder and climb the stairs to the second floor. Go down the ladder, drop a bomb next to the statue to the left (against the wall) to fight the guard and find a new Golden Leaf. Then climb back up, go right, down, left and get out. Get in from the other entrance, toss a pot against the door and get in. Avoid the warrior's ball and chain and hit him several times with your sword (or throw two bombs at him) to get another leaf. Get out, jump down from the terrace, then go left and up. Throw a rock at the crow and strike it twice to get the last Golden Leaf. 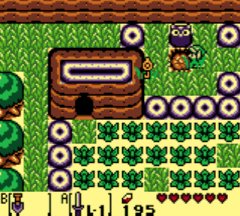 Go back to Richard's, give him the leaves, then push the frog statue and go into the passage. Get into the cave, pick up the Secret Seashell in the chest if you want, and get out. Outside in Pothole Field, cut the bushes to find a path going down, right, up and left. Cut another bush in front of the Owl, talk to it and dig right under your feet, there is the Slime Key! Go back to Richard's and get out (or just lift the rock on the left), go up, left, up and unlock the statue. Then, head towards the castle, but stop next to the lake (H11) and get through it by jumping from island to island. Then get in the... 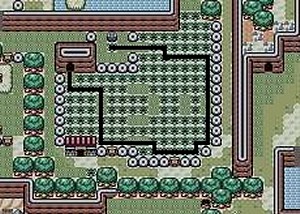