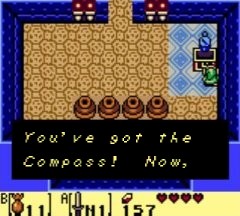 Go up, climb the stairs to the middle of the room and use some Magic Powder on the two torches. Go on to the right, get rid of the two skeletons, pick up the Small Key, go back to the left and open the left door. Clear out the bats, then go up and light a torch. Go through the gap, push the enemy towards it and pick up the Stone Beak in the chest. Go back down, right three times and use the Stone Beak on the owl to get some clues.

Hit the blue crystal with your sword, then go down, hit the other crystal and pick up the Small Key in the chest. Hit the crystal, go back up, hit the other crystal, go left and open the bottom door. Get rid of the enemy by throwing a bomb at it, or by using the spin attack with your sword to hit its back. Pick up the Compass in the chest, then go back up, right and down. Go on to the right, go through the gaps, grab the Magic Powder pouch and step on the switch to pick up another Small Key in the chest. Hit the crystal, go up and get rid of the enemies, then backtrack to pick up the Small Key that appeared. 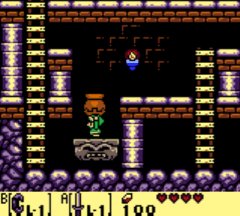 Next, go back where you were, go on to the right, then unlock the upper door. Here, read the owl's clue, push the two blocks on the blue slabs and take the stairs. Go through the underground passage by jumping and using the lifts. Light a torch to locate the holes, then go up and get ready to fight Hinox! Don't get too far from the centre of the room, avoid its attacks and use your sword (or two bombs) to defeat it. After the whirlpool has appeared, go on right, read the really important clue and go up.

In this room, there are very strong currents from time to time that will attract you to the left. Hold on, and when they disappear, go quickly towards the chest, pick up the Map and go up. You will find 20 rupees in the chest, pick up the Magic Powder pouch if you want to, then open the door to the left. Quickly light the two torches to get rid of the ghosts and pick up the Power Bracelet. Go back to the right, lift and toss the pots from the top to go right, then hit the crystal twice to reach the chest and pick up the Small Key from it. Go back left, then down twice, toss a pot and take the stairs. Go through the underground passage and get out. 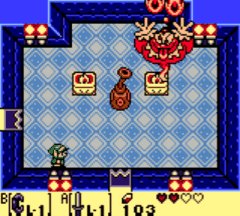 First of all, push the blocks to get close to the jumping rabbit (Pols Voice) and get rid of it with a bomb or by throwing a pot at it, then get rid of the Keese and to finish, the Stalfos. (If you have already broken the pots, leave the room and go back.) Pick up the Nightmare's Key in the chest, then go up and unlock the door to the right. Get rid of your enemies, look for a fairy under one of the pots at the bottom and take the newly appeared stair. Go through the underground passage while carrying a pot so you can use the second lift. Then, go through the gaps and unlock the Nightmare's lair.

There are two phases to get rid of the Genie. During the first phase, avoid its attacks, hit the bottle when it's moving around, then quickly lift it and throw it against the wall. Repeat this twice. Then the Genie will start to spin very fast, strike it as soon as it stops and do this several times. Pick up the Heart Container, then go left and pick up the Conch Horn.