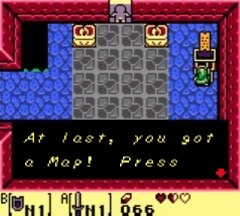 To defeat these enemies, you have to hit them in such a way that they all have the same symbol at the same time. Then pick up the Stone Beak in the chest and get close to the owl to read the clue. In each temple, there is a Stone Beak allowing you to read the clues from all the owls. Come back down, then left, then go left and get rid of the caterpillar. 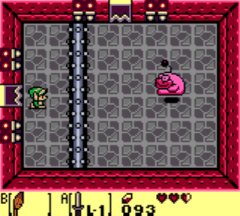 Pick up the Small Key in the chest, then go left again. Fight off the caterpillar, pick up 20 rupees in the newly appeared chest, then go up and unlock the door with a Small Key. Go right, walk around the blocks, then push the block right in front of the door to unlock it (according to the owl's hint). Go left, bump into the enemies with your raised shield to flip them over and hit them with your sword. Then take the newly appeared stairs, go through the underground rooms and climb the ladder.

Follow the corridor and pick up the Roc's Feather in the chest. While picking up the small flying heart thanks to the Feather, backtrack to the room with the first caterpillar and go on to the right (up). Go up, go across the gap using your Roc's Feather, then unlock the block and climb the ladder. Go left, pick up the Nightmare's Key in the chest, then go back to the room with the caterpillar and go right (down). 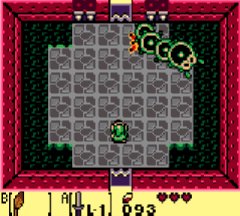 Go right thanks to Roc's Feather and go through the door. Fight off the Rolling Bones with your sword by jumping when the rolling log gets close. Once it's defeated, a whirlpool will appear: this warp tile allows you to go back to the temple's entrance and vice versa indeed. Go up. If you need some hearts, go down the stairs, pick up the flying heart and come back. Unlock the Nightmare's door and get in.

Go to the centre of the room to attack Moldorm and stay there so you won't fall off. After a few strikes at its tail (when it's red), pick up the Heart Container, go up and pick up the Full Moon Cello.