Call Epona and head to Termina's eastern part. Jump both barriers, then go north and get off your horse. Climb on the ledge and follow the path heading to the graveyard. 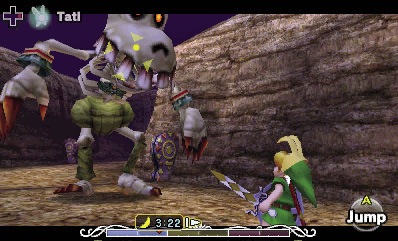 Go straight ahead until you see a huge skeleton head, Skull Keeta, and play the Sonata of Awakening to wake him up. Your goal is to stop him in his tracks before he gets to the top of the hill by striking him or firing arrows at him.
3DS: If you have arrows, shoot one at him. If you don't, follow him, get rid of the two skeletons to cross the fire wall and go on this way until he turns around.
N64: Start by firing an arrow at him, then get rid of the two skeletons to cross the fire wall. Fire another arrow at him, get rid of skeletons and this until he turns around.
There slash him with your sword or fire more arrows until he gives up. Skull Keeta introduces himself and tells you he has been waiting for someone to awaken his soul. When he asks you to take his soul, throw the Hookshot at the chest to open it and get the Captains' Hat.

Go back to the graveyard on the first day night, wear your Captain's Hat and talk to one of the three skeletons which are guarding a grave. Ask them to open it and get down. 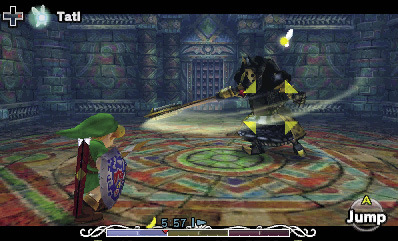 Jump on the two platforms and go in the next room. Get rid of bats, take the purple rupee in the chest, then light on all three torches and open the unlocked door. Hit the warrior to awake him and be ready to be agile since his weakness is his slowness. Using the Gilded Sword and the Bunny Hood makes the fight easier. Get close to him carefully and when he is preparing his axe attack, draw back and strike him once or twice when he cannot move (since his axe is stuck in the ground). After a few hits, he becomes quicker, but keep repeating this attack several times. Then you meet Flat, the composer, who got locked away by his brother and used to serve the Ikana Royal Family. Look at the stone on the pedestal to learn the Song of Storms. Leave this place, return to the surface and leave Ikana Graveyard.

Back in the canyon, just after the two barriers, look up and look for a man with a hood and a purple tunic near the path going east. He says that you must obtain the mask containing the "wandering spirit" which you can get from two men near the Romani Ranch. If you don't own the Garo's Mask yet, click on it, then come back here. Wear the Garo's Mask, talk to him, then use the Hookshot to get on the branch that he is spawning. Next, get off your mask and follow the path.