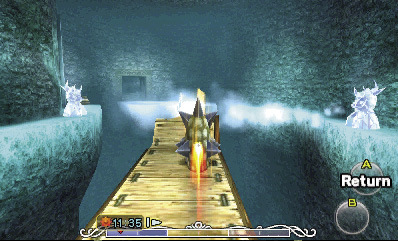 First, break the ice to free a block with a mask drawing and push it. Then open the door on the right. Look eastward, fire an arrow at the fairy in a bubble and wear the Great Fairy Mask to get the 1st stray fairy. There is another fairy in a bubble stuck in a kind of stone pillar in the middle of the room. Shoot another arrow to free her and get the 2nd stray fairy, but if you have trouble, you can also do it from the other side of the room. Anyway put on the Goron Mask to cross the gap by rolling and jumping to the other side, then follow the path to the north. 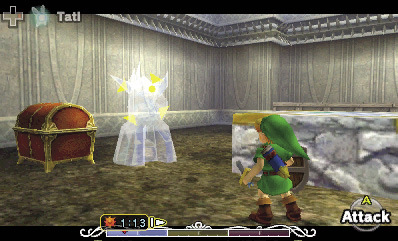 Jump westward and open the door. You arrive in a huge room which stretches on several levels. Cross the room to the left and open the door with yellow decorations on your right. Pull the blocks, then go behind them to find a Small Key in a chest. Next, push the blocks to the far left to see them slightly sink, which makes a chest appear. Get out, cross the room and follow the path to the left of the blue door to reach the basement.

As Goron Link, look for a switch on your left, stand on it to make a chest appear and find the 4th fairy inside. Get back out. 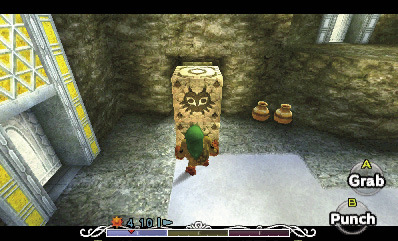 Open the blue door, jump downstairs, then climb the ladder and go back to the first room. Open the door opposite with the key and find the Compass in the chest. Then, remove your mask, place a bomb next to the cracked wall and climb the stairs to reach...

Jump on the first two platforms, then use the lens to find a hidden opening above some snow on the wall. Jump towards this opening with your Bunny Hood and take the 5th fairy in the chest. Next, make a huge jump on a platform to your right! Then fire two arrows at icicles hanging from the ceiling to clear other platforms and be able to reach the big snowball. So jump there, punch the snowball and find another Small Key in a chest. Now unlock the right door with the key. 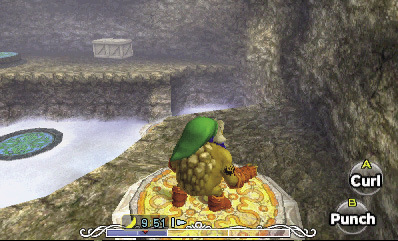 Look at the ceiling with the Lens of Truth and fire an arrow to free the 6th fairy. As Goron Link, stand on the yellow slab to the south, then curl and pound it to make the other yellow slab go up. Then as Link, jump on this platform to reach the other side. As Goron Link, stand on and pound the green slab, which makes another green slab go up, then go back quickly to the yellow platform that got up. Pound it to clear the next door, then jump on the green platform in the middle of the room, then toward the door to the north and open it. 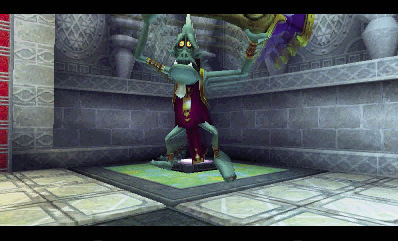 Wizzrobe will breathe out frozen balls and wander around the four corners of the room. In order to defeat it, hit it with your sword or your punches 5 or 6 times until he stops and creates three clones. Continue to hit him (his clones are translucent) 3 or 4 times and you will get the Fire Arrow.

Get out, cross the room eastward, roll northward, then jump to the first floor gray platform.

There nock your bow with Fire Arrows and melt the ice on all the doors. Then open the green door to the west and get rid of the three enemies with your Fire Arrows to find the 7th fairy in a chest. Next, still with the Fire Arrows, light all three torches quickly to unseal a door to the southeast. Jump on the platforms and open this door. (If you fall, melt the ice around the Deku flower, wear the Deku Mask and come back upstairs.) Curl up and pound the slab, and a huge platform will rise and reach the ceiling. 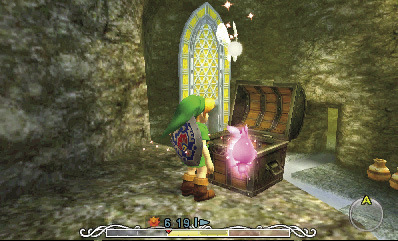 Go back out and to the previous room (south), then open the red door to the south and go back to the Compass room to the west.

Cross the room and pick up the 10th fairy in a chest. Go back south and east twice to return to the second visited room. Melt the ice around the chest and burn down all the enemies, then cross the gap as Goron Link, remove your mask and open the chest to get a Small Key. Go north (where the map was). 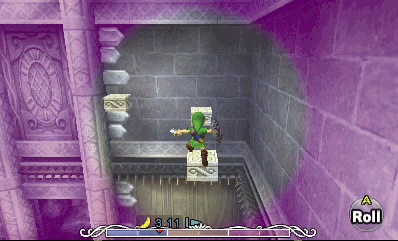 Stand on the slab, then fire one or two Fire Arrows on the ice located to the south, the platform you stand on will rise. Then, quickly jump onto the ledge. Before heading for the next door, use the lens to see some steps, jump from one step to another leading you to a chest containing the 11th fairy. Go down one level and open the door to the west. As Goron Link, roll over the snow on your right, then melt the ice to the east and climb the stairs. 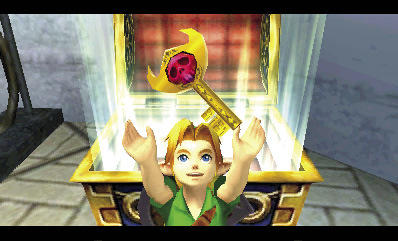 Take a few steps ahead, then use the lens and look for a Deku flower toward northwest and lower. Put on your Bunny Hood if you got it and jump toward this flower to find the 12th fairy in a nearby chest! Glide northward and drop on a path linking to the central pillar, then climb back the stairs to the third floor.

Again roll on the snow on your right, then unlock the door. Get rid of the enemies with your punches, then use the lens toward southwest, fire an arrow to free the 13th fairy and wear the Great Fairy Mask to get it. Melt the ice to the north and head north. 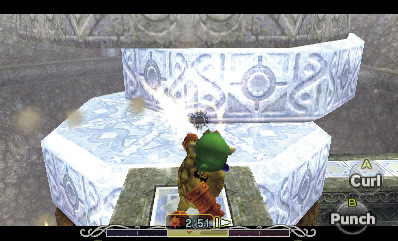 Defeat both lizards to free the 14th and 15th fairies. Next, go right, cross the room to the right and go through the door. Once more, you will need to beat Wizzrobe using the same technique. Afterwards open the unsealed door and find the Boss Key in the chest. Get out through the door to the left of the chest. Now you need to find a way to the boss room. Turn to the right and roll to land one level below, then go down the stairs to the second floor.

Approach the central pillar and punch the two blue parts to make them fall and lower this pillar. Go back to the third floor and punch another blue part to make it fall, then roll on the snow to the west and make the last part fall too. Once again roll on the snow to the north, then walk to the centre, punch the snow balls and climb the stairs. Once arrived on the 4th floor, roll to cross the room and open the boss door. 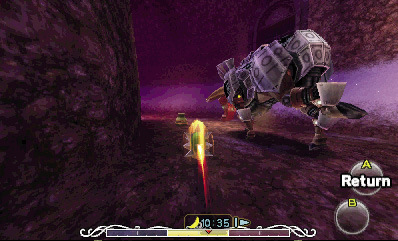 Beating Goht isn't really hard, but it takes time. First of all, shoot a Fire Arrow to melt the ice around him. When he starts running, curl up and roll in the same direction to catch him up, and hit him with your spikes to stop him. Roll over green pots to refill your magic gauge. Try to avoid the blue beams and bombs he throws at you, the other projectiles slow you down, but don't hurt you.
3DS: When he stops, Goht will show you his weak point: an eye on his back. If he fell on his back, punch the eye as much as you can, and if he fell on his belly, quickly remove your mask, target the eye and fire as many arrows as possible until he gets up on his feet.
Chase him again while rolling over green pots. Try to avoid the beams and bombs he throws at you, as well as the rocks falling from the ceiling which could stop your race.
Once you have defeated him, pick up the Heart Container, then get into the light and seize Goht's remains. 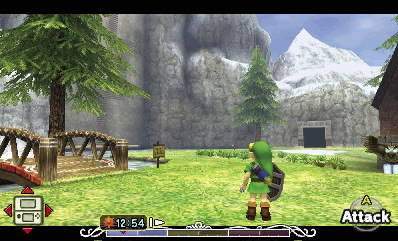 There is another way to beat Goht on N64: After unfreezing him, come back near the door where you are safe. Move forward just a little and prepare to shoot Fire Arrows when you hear him getting closer. The first time, try to guess from which side he will arrive, then he usually keeps this way. Also use the Z-targeting to make sure you will hit him. This method also takes time, but you should lose less (or no) hearts.

Once you're back to the Mountain Village you will find it under the sunlight and not so cold. If you found all 15 stray fairies, play the Song of Soaring and choose Snowhead. After rolling up the slope, go right and go through the doorway to the east of the temple.
3DS: The Great Fairy of Power will give you a brand new sword technique: the Spin Attack!
N64: The Great Fairy of Wisdom will double your magic power.