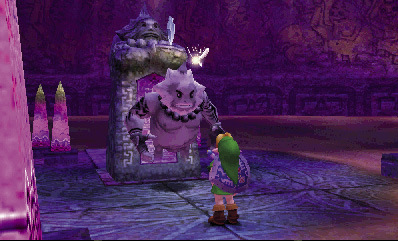 Wear this mask to turn into a Goron and read Darmani's tombstone to learn about your new abilities as a Goron. Go behind the stone, grab it and pull it to let the Hot Spring Water spring out. Take some in your bottle, get out and pour it on the frozen Goron. Next, remove your mask and take some more water. Now quickly, get out, jump into the water, then roll as Goron Link or run with the Bunny Mask towards east, then go to the platform with a big chunk of ice in the middle. Pour some hot water on it, then drop through the hole. Take some more hot water and leave. 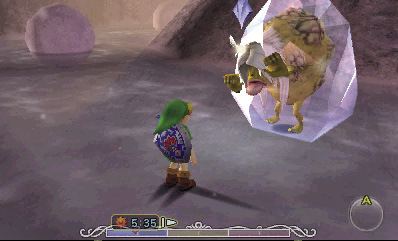 Now, quickly jump towards the big snow balls to the south and look for the ball that Tatl is spotting. As Goron Link, punch it, then melt the ice around the frozen Goron. Be careful, the third day (on 3DS), this Goron will be in the Mountain Village area. Talk twice to the Goron Elder and he will play the beginning of a melody: the Lullaby Intro. (If you haven't met the baby before, it won't happen.) Head back to the Goron Village.

Return to the Shrine simply by curling up and pounding the ground. Talk with the baby again and play the Lullaby Intro so he will complete the song. You learn the Goron Lullaby.

Now you can get an optional item or go on the main quest by returning to the Mountain Village. You can also get this item later, but before completing the next temple. 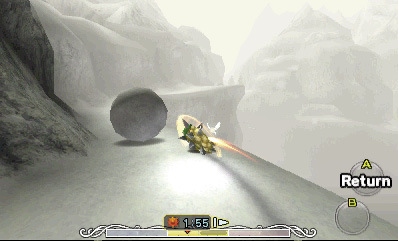 To get an additional mask, wear the Bunny Hood, then light a Deku stick and quickly get out, light the two torches at the end of the red carpet, then go down the slope, light the six torches on your way, then the three torches in front of the Goron symbol. Then the chandelier will begin to spin. Climb back the slope, then as Goron Link, gain momentum, roll and break one of the chandelier's pots. Do this again until something falls on the ground. Pick up the Rock Sirloin and bring it to the hungry Goron in the mountain hamlet (throw it to him). He will thank you by giving you the Don Gero's Mask.

Follow the northwest path towards Snowhead. Wear the Goron Mask and gain some momentum to roll and cross ravines. Activate the Owl Statue, then use the Lens of Truth to find out that a giant Goron is blowing the Blizzard. Play the Goron Lullaby to put him to sleep, then go ahead and roll again to go up the slope. Walk around Snowhead from the left and go through the doorway. The Fairy Fountain is located under the temple entrance.