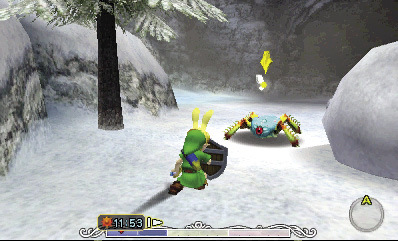 The next step of the main quest is taking place in the mountains. Before going there, buy a Bomb Bag at the Bomb shop in West Clock Town if you haven't done it before. Head to the north part of Termina Field, cut a few bushes to find some arrows, then go down the slope to the north of Clock Town north gate. Turn to your right, write down the notes on the wall and play them to get some rupees. Next, climb the slopes northward until you find some ice blocks on your way. Use the Bow to shoot two arrows at the stalactite, then go on. Keep going, use a bomb to blow up the snow balls in front of you and go ahead toward north. 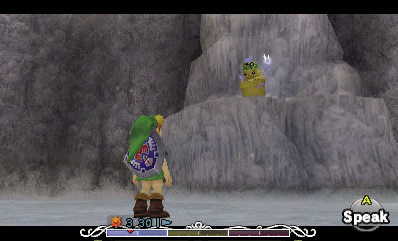 In the hamlet, go left and talk to the hungry Goron on a cliff. Next, check the Owl Statue on the other side (to the north), then get in the Mountain Smithy and listen to Zubora and Gabora. They tell you about the unusual cold weather, their frozen hearth and say that they heard about hot springs somewhere in the mountains. Get out and follow the track on your right toward the Goron Village. Go on, cross two bridges and buy the Snowhead map from Tingle for 20 rupees. Continue up to the... 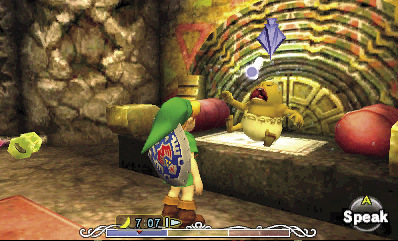 Head toward the centre to meet a Gatekeeper Goron, then when he opens the door to the Goron Shrine, jump on the right to quickly get in. There you can find a shop which sells bombs, arrows and red potions. Talk to the Gorons, then go upstairs and also talk to the baby to know why he's crying: he misses his father. Get out and go toward northeast to meet with the owl again. He will take off to an island on the right, leaving some feathers on invisible platforms. Quickly jump from one feather to another (without the Bunny Hood) to join him. If you fall, go back where the owl was to start again. 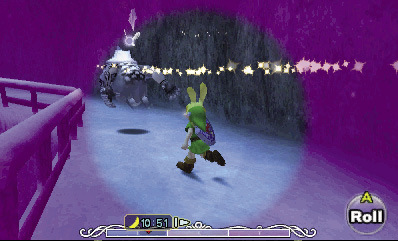 Get inside the cave, open the chest and find the Lens of Truth. Use it (watch out for the magic consumption) to find other chests holding a few rupees. Then get out, jump on the visible platforms thanks to the lens and you will see a Goron Ghost. Disable the lens and follow him by means of his shadow. When the shadow stops, enable the lens and he will go on, leaving the village, heading to the Mountain Village then heading to the north of it. Also cross the lake by jumping from ice block to ice block, then use the lens again to reveal an invisible ladder. Climb the ladder, when arriving at the first junction, go right, then left, then right and to the top. There talk to the Goron who tells you about Hot Spring Water he found, then enter the Goron Graveyard. Speak with the Goron Ghost who is Darmani the Third, play the Song of Healing to heal his sorrows and you will be rewarded with the Goron Mask.