Now you can either go on with the main quest by heading to the Southern Swamp or you can stay in the city to get some masks, songs and pieces of heart. You can still obtain those items later. 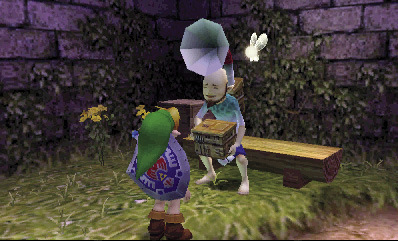 Between 8am and 6pm on the first or second day, go to the inn in the Eastern District. Go in the first room on the ground floor and speak to the old lady. Anju's grand-mother will then be added to your notebook.

At 10am on the first or second day, go to the town hall in the north part of the Eastern District, open the door on the right and talk to Toto, this imposing Zora is visiting Madame Aroma and will be added to your notebook. Also talk with Madame Aroma, who will be added to your notebook as well, and accept to help her find her son (check for the Anju and Kafei quest chapter) to get Kafei's Mask. At 11am, only during the first day, Gorman will meet them, talk to him so you can hear their conversation.

Between 10am and 8pm on either the first or second day, head to the town hall in the Eastern District. Enter by the left door and enjoy the mayor meeting. The Mayor will be added to your notebook. 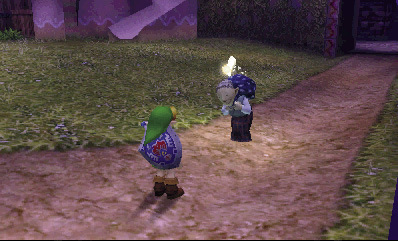 Between 4pm and 12am on either the first or second day, go to the post office in the Western District. Talk to the postman on his bed and agree to play his game. If you win (be patient), you will win another Piece of Heart and the postman will be added to your notebook. If you really can't do it, come back later and wear the Bunny Hood which will allow you to see the timer.

During night, either the first or second day, go to the Southern District, climb the sloping path in the south-west corner to reach the town Laundry Pool. Talk to Guru Guru the musician and listen to his story. He will give you the Bremen Mask and will be added to your notebook.

At midnight on either the first or second day, go to the Northern District. An old woman will arrive and will be robbed of her bag. Rush towards the thief and use your sword to slice the rope of the bag. The old lady from the Bomb Shop gives you the Blast Mask and is added to your notebook. Later on, you will be able to enter the Bomb Shop in the Western District to buy the bag. 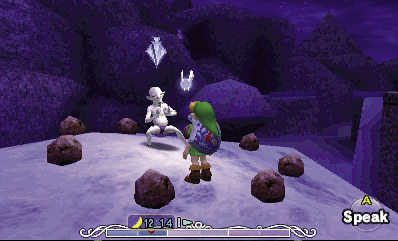 Between midnight and 6am, any day, leave Clock Town from the northern gate. Climb on the low wall, go along it westward looking on your right until you can hear a song and see a man. Then jump off the low wall to reach the rock where Kamaro is dancing. Talk to him to add him to your notebook, then play the Song of Healing so he will hand you Kamaro's Mask. Go back to Clock Town and to the Western District, put on your Kamaro's Mask and dance in front of the Rosa Sisters in the plaza so they will give you a Piece of Heart. (They are only present during the first and second nights).

Between midnight and 6am of any day, after having picked up once again a Moon's Tear by looking into the Observatory's telescope and exchanged it with the Town Title Deed with the Business scrub, enter the inn through the first floor door (using the Deku flower), go down to the ground floor and find a hand behind the front desk. Talk to it, give it the Town Title Deed as paper and it will give you a Piece of Heart (and will be added to your notebook). 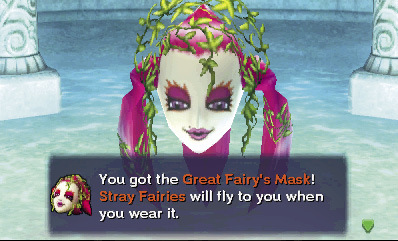 Anytime, still in the Northern District, try to climb up the slide to obtain a Piece of Heart on a tree. But you can also climb on pillars nearby and jump to reach the top of the slide.

Anytime, go back to the Observatory and talk to the Scarecrow on the bottom floor. When he proposes to dance, says yes if you want to advance forward through time to be on the next morning or night. Otherwise just say no. Then he proposes to tell you about songs which manipulate time. Say yes to hear about this. This way you learn the Song of Double Time which lets you advance forward through time to any desired hour (on 3DS - on N64 you go forward at 6am or 6pm), and the Inverted Song of Time which slows the current flow of time.

3DS: Behind the Clock Tower (on its northern wall) / N64: In West Clock Town : Anytime you can make a rupee deposit in the bank to prevent losing them during a Song of Time use. When you reach a 200 rupee deposit, the banker will reward you with the Adult Wallet.

In the Western District, get in the Sword master's Dojo and choose for the Novice Course in order to learn different sword moves. When you feel ready, ask for the Expert Course (paying 10 rupees) and show him what you have learnt to get a Piece of Heart.