Jump on the blocks and go on to enter the Stone Tower Temple again. Go ahead to the Majora's symbol and turn around. Fire a light arrow at the sun above, then pick up the 10th fairy in the newly-appeared chest. (If you have run out of magic, go west and break the crates.) Go east and open the door.

Fire a light arrow at the sun block, then go on and use the Deku Flower to cross the room northwards. Shoot a fire arrow at the eye behind you, which makes a chest appear, then use the updraughts to glide and reach an alcove just a little bit above to the north. Open the chest to get the 11th fairy, then fly towards east and drop on a platform with a blue switch. Step on it, play the Elegy of Emptiness, then glide northwards towards the now reachable chest to find the 12th fairy. Jump on the central path on the second floor. 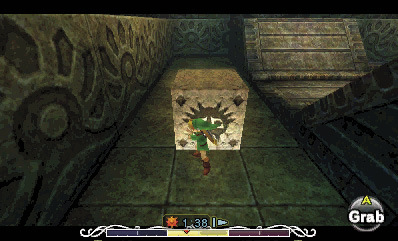 Fire a light arrow at the red stone to turn the temple upside down again, cross the room as Goron Link, then fire another arrow at this stone and open the door. Here you have to push the stone block to its location. Look for a Majora's symbol, then push the block to the south, fire a light arrow at the red stone, then keep on pushing the block and turning the temple upside down until the block is in on the drawing, which unblocks the door. Next, climb on the block and open the next door. 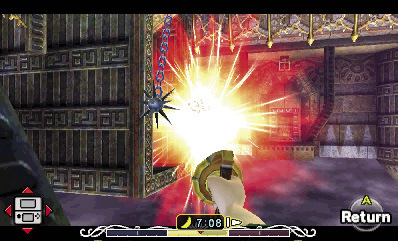 A new Wizzrobe! Put on your Bunny Hood and fight him as usual, then when he multiplies himself, take shelter in the northwest corner. When the real one is near you, rush towards him, strike him with your sword and take shelter again. Once defeated, throw your Hookshot at the chest in the northwest, take the 13th fairy inside and climb down the stairs.

Use the Deku flower to cross the room, then dive in the other flower and glide towards southeast. Put on the Stone Mask, go south and look for a blue switch. Step on it to make a chest appear to the west, then play the Elegy of Emptiness and take the last Small Key using the Hookshot. Come back to the previous room (with ghosts), open the door on the right. 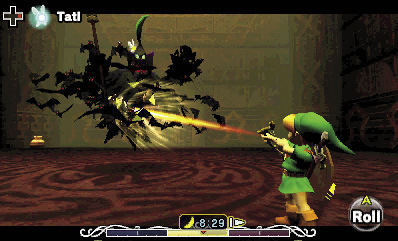 Beating Gomess isn't that hard, keep him at a distance and fire one or two light arrows to scatter his bats. Then if you hit him (he's paralyzed) quickly strike him with your sword, then raise your shield and get away. If you miss magic, slash some bats to get some back. Repeat this a few times, then open the eastern door and pick up the Boss Key in the big chest.

Return to the previous room, break the crates again and go back west. Destroy the mines again, fly towards north, then fly again to the west. Go south and open the door. Put on your Stone Mask, then jump onto the platform and step on the switch to make a chest appear on the ceiling. Now throw your Hookshot at this chest to reach the last part of the temple. 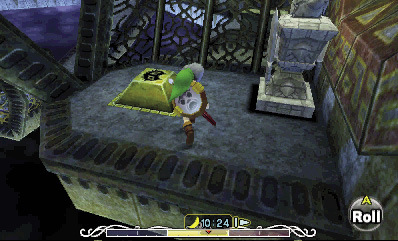 Open the door with the key. Like with the previous Cyclops, rush on it and protect yourself with your shield. As soon as its eye turns yellow, fire a light arrow at him and do this twice.
N64: Then, open the chest to find the Giant's Mask!
Open the next door. If there is no chest on the ceiling, throw your Hookshot at the diamond, then on the chest to get past the spikes, then use it on the target. Drop a bomb near the Beamos to destroy it, then jump lower and break the pots to fill up on magic, arrows, bombs and hearts. Next, unlock the boss door and jump into the abyss. 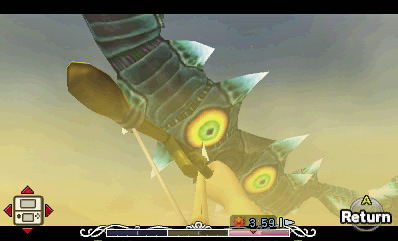 3DS: This boss is composed of two flying sand snakes. If you have a Chateau Romani, it's time to drink it. During the first phase, focus on the blue snake and shoot simple arrows (without targeting) on the eyes located under his body. When they are all destroyed, the snake falls to the ground, turns in a circle and exposes a big eye. Quickly fire several light arrows at this eye, four if possible. If you didn't have enough time, repeat this technique once more. Then the blue snake is beaten and a chest will appear at the centre of the arena.
N64: In order to beat this boss you mainly need to use a lot of magic since wearing the Giant's Mask is using magic. However, you still can beat him without the mask (but it takes longer and it is tedious). If you got your Chateau Romani, it's time to try it. The weaknesses of sand snakes are their head and tail. Put on your Giant Mask to grow up, wait for them to get off the sand and hit their tail before they get in the sand again. Do this attack many times to beat them. When you are short on magic, destroy pillars to get magic refill and go back at fighting. 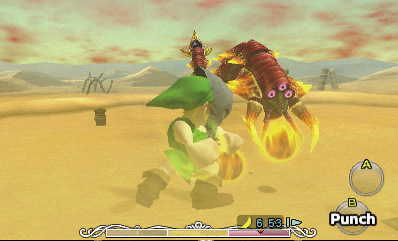 Run to this chest and open it to find the Giant's Mask! Only the red snake remains for the second phase. Put on the Giant's Mask to grow up! Be careful, wearing this mask uses magic power, so keep an eye on your magic bar and break green jars at the centre of the arena before you run out. Grab a round rock and throw it on the snake to stun him, then quickly grab his tail to make him spin and hurt him. You can also punch him as much as you can, then when he's stunned, make him spin. After having made him fly four times, he will finally be defeated! and you can seize Twinmold's remains.

During the cutscene you can see a giant creature... He tells you to call him and the other giants... He also asks you to forgive a friend. What friend? Tatl says you should call them from Clock Tower. 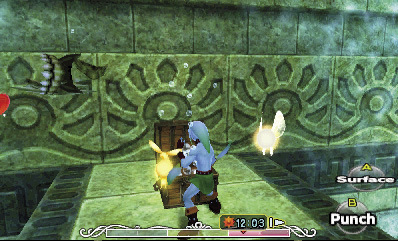 Once back to the Ikana Canyon, soar back to the temple to find the remaining fairies. Revert the temple back to its original state, then get in, jump to the centre and pick up the 14th fairy in the chest. Go back to the room to the east and walk past the chest holding the Compass. The 15th fairy is located in a chest right under your feet, jump in the water and look south. Leave the temple once more, play the Song of Soaring to go back to Ikana Canyon and bring all 15 stray fairies to the Fairy Fountain located to the east of the music box house. The Great Fairy of Kindness will reward you with the Great Fairy's Sword.