Be careful: In this temple, do your best to gather all 15 stray fairies as you progress. If you don't, you will have to do the whole temple again, so you should play the Reverse Song of Time.
As always, follow indications relative to the map and not relative to Link's position (except if asked to). 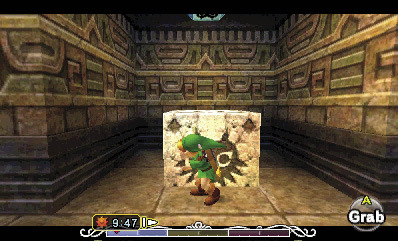 First get rid of the bomb creature, then fire an arrow at the eye toward north, which makes a chest appear. Throw the Hookshot at this chest and open it to get the 1st fairy. Then, open the western door.

Use a bomb to open wide the cracked wall in front of you, then get rid of all bomb creatures since they could bother you, and come back near the opened wall.
3DS: Blow up one or two crates, grab the block and push it onto a switch to the south. Go north, stand on the switch and play the Elegy of Emptiness to keep it pressed. Then go west, step on the big switch as Goron Link and play the Elegy of Emptiness. Then go east, look for the last switch, stand on it as Zora Link and play the song to open a gate. 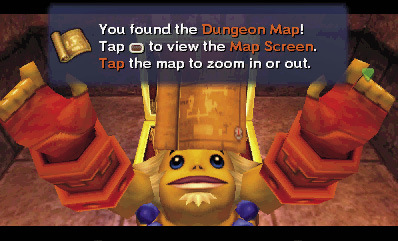 N64: Roll into a crate to break it, then take one of these small crates and place in on a switch. Do the same with another crate, then look for the third switch to play the Elegy of Emptiness. Finally, look for the big switch and play the Elegy of Emptiness as Goron Link.
Follow this passage and place a bomb on the cracked floor (on 3DS) / part of the ground without grass (on N64). Jump through the hole.

Use your shield to lighten the sun block, then throw your Hookshot to reach the chest and take the Dungeon Map inside. Next, as Goron Link, punch twice the four Armos statues so they crash on a wall, then find a Small Key in a new chest in the lava. Before getting out, throw your Hookshot at a target on the ceiling in the northwest corner and pick up the 2nd fairy in a chest. Climb up the stairs. 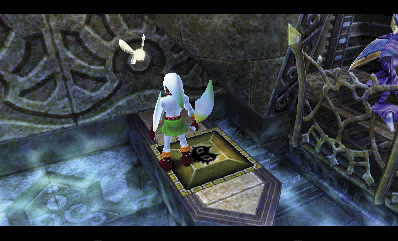 Unlock the eastern door with your key and go through. Jump into the pond and dive to the bottom of the water.

3DS: Walk east and get rid of the two mines with your fins. Then walk north and face south. Swim, speed up and jump out of the water and onto a small ledge with a switch!
N64: Let you grabbed by a hand so it throws you on the other side.
Step on the switch, which makes a chest appear, then swim towards it. Open the chest and pick up another Small Key. Next, get back into the water, get rid of the hand and follow the corridor.

Dive to the bottom of the water, destroy mines with your fins and step on the switch to spawn a chest on the ceiling. Then go to the surface. 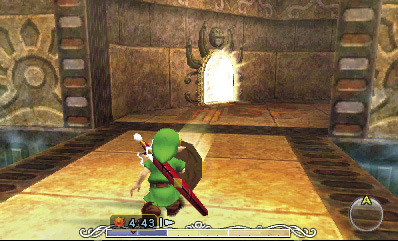 Climb on the central path and shoot a fire arrow at the eye over the northern door to make another chest appear on the ceiling. Turn around, then use your shield to reflect light at the mirror for at least 10 seconds (the more light you reflect, the more it will last), run towards the light beam and reflect it towards the sun block to make it disappear. Open the chest on your left to pick up the Compass, then come back north and unlock the door.

As Goron Link, punch twice the pillar in front of you, then take off your mask and climb on this pillar. Wear your Stone Mask so you won't be bothered by enemies, then reflect light at the sun drawings to the east to make a chest appear and open it to get the 3rd fairy. Still using your shield, light the mirror on the right on the central pillar, then reflect again the beam of light towards the sun block to make it disappear. Go east and find the 4th fairy in a chest. Come back on the first pillar, light the left mirror on the pillar during 10-15 seconds, run towards this mirror to reflect light at the mirror on the left wall and finally this same light at the sun block to the north. Open the next door.

Using the Deku flower glide towards left, pick up the rupees and find the 5th fairy in a chest. As Goron Link, jump into the lava and pound the stab near the entrance, then quickly roll around the room to reach a switch before the flames come back to life, which spawns a chest containing the 6th fairy. Next, roll back to the southeast and climb the ladder. Dive into the flower again and fly around the room using updraughts. (If the chest doesn't matter to you, stay as Deku Link.) Open the chest holding the stray fairy, then open the next door to meet the Garo Master. 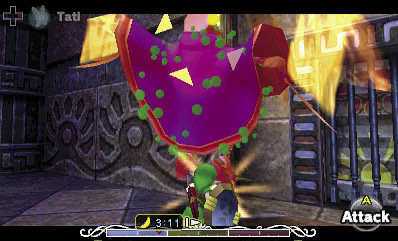 Like his fellow members, you will need to beat him using your sword, but you will have to be quick. Put on your Bunny Hood, then when he is attacking you, dodge him. He will stay still a few seconds, quickly strike him with your sword. When he's taking off, he will soon land just on you, so don't stay still and slash him right after he lands. After five hits, he gives up and says you should shoot an arrow at a red emblem outside the temple. Then he rewards you with the Light Arrow.

Open the southern door, climb on the platform in front of you, then throw your Hookshot at the enemy to remove its mask and finish it with a sword hit. Jump west, look for a diamond under the wire platform and place a bomb above it, which makes a chest appear. Then drop to the north, open the chest to find the 7th fairy and climb back using the Hookshot at the ceiling target. 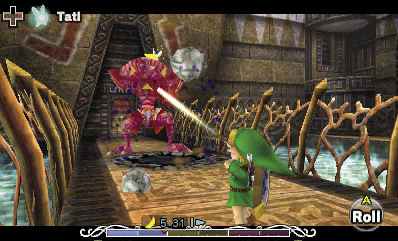 Open the door to the south. Rush towards the cyclops and raise your shield in front of him. His eye will turn yellow, quickly fire two light arrows at his eye, and repeat this to defeat him. Take the 8th fairy in the newly-appeared chest and open the next door to be back in the first room.

Get back to the west room, raise the gate, go to the open area, open the door on the right and go back to the chest where you found a small key. Place a bomb against the barrier to activate the diamond which makes another chest appear. Then wear the Zora Mask, dive in the pond, swim westward and speed up to get out on the water on the west ledge. [If you don't succeed, come back on the other side. You still can get this fairy after beating the boss.] Fire a light arrow at the sun block to destroy it, put on the Stone Mask and get the 9th fairy in the chest. (If you have run out of magic, open the west door, cut the grass to get some and come back here.) Come back to the temple entrance using the Song of Soaring and get out. 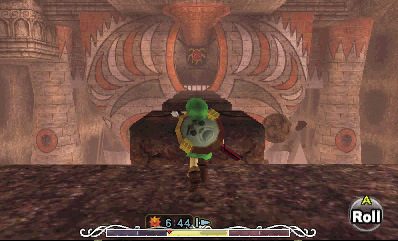 Before going on, if it is between 10pm and 5am you should buy a Chateau Romani in the Milk Bar, which will be really helpful against the boss (especially on N64). You can also do it later before entering the boss room.
If you want to go on right now, 3DS: walk to the edge of the platform / N64: jump on the first block, turn around and fire a light arrow at the red emblem that turns the temple upside-down! Or else, when you come back, use the Elegy of Emptiness to re-position the blocks, jump as far as the third one and fire a light arrow at the red stone.