After finishing the Forest Temple, when you return to the Temple of Time, Sheik says that you can fight the already defeated bosses once again by sleeping in your bed. Indeed, in Link's house, when going to bed, the word "look" appears. So look at it to take a nap or fight bosses!

Once you have beaten all the bosses again, a new game mode will unlock which involves defeating again ALL the bosses in a row, which means that there is no possibility to save between two bosses! If you fail during a battle, you will have to start all over again. Furthermore, your hearts are never filled after a fight and there is no Heart Container to get. During this challenge, a timer is running to make records.

In this mode, you will begin with: 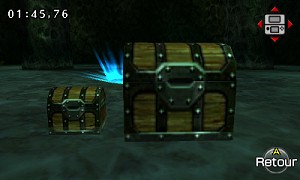 When a boss is defeated, two chests appear: a small one and a big one.
One of the two chests holds a useful item (heart container, red potion, bombs, etc.), whereas the other one holds a "consolation prize" (deku nut, heart, etc.).
There is no special reward at the end of this game mode.
The timer only stops during the cutscenes. For example, opening a chest makes you lose time.

Here is what can be found in the chests after each fight. These items may probably change for each game.

*** When you find a red potion, if you had an empty bottle before, the empty bottle disappears.
If you don't have a bottle, you can't find red potions (not 100% sure).

Big thanks to Lancelot and Samchi for their additional information!