Ocarina of Time tips and tricks

A little guide to help you catch a big fish

Big fishes are found either in the middle of the pond, near a boat-shaped branch, or near the three poles sticking out of the water. You can try to spot them with the Z-lock or the Iron Boots, but don't come too close or else they'll swim away! You can climb on the big branch to see if there is a fish in the middle of the pond, but don't try fishing it from here, it's almost impossible to catch. It's best to stay on the edge to fish a fish (if you're standing in the pond, it will be harder to fish it out). Fishes bite more during sunrise and sunset!

Once you've spotted a fish, cast your line. During the cast, you can press A so it doesn't go too far. Then, use your joystick to move your fishhook. Fishes are attracted by movement, not by a motionless fishhook.

As soon as the fish bites, press A and pull your joystick down, then after 4-5 seconds, let the joystick go and press R (keep holding A down). When the fish is starting to get out of the water, move your joystick right or left to take it out faster. If you aren't able to take it out, it will go away, you'll then have to find another fish.

Like in real-life fishing, stay calm and be patient! 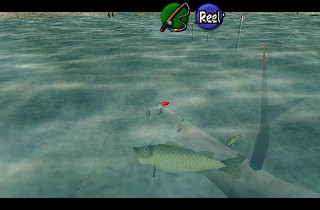 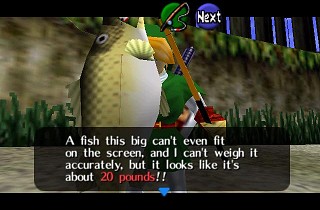 This is where the biggest fish of the pond often is  /  You have better chances to succeed by looking near the three poles.

Secrets of the pond

Some of you may have heard about a special lure and an eel, well yes, they do exist!

This fishhook allows you to catch fishes more easily, but you won't earn any rupee for the fishes caught using it.

As a child or an adult, go to the fishing pond and rent the fishing rod. Walk either near the rocks by the stream, or where the stream meets the pond. Roll around these places to find this invisible lure. You have to be patient and try several times before you can find it. As a child, you can also find it on the tree trunk on which you can stand in the pond - you just have to walk on the trunk to find it.

The eel in an enormous and very rare pike that weights 30 pounds. The sinking lure is highly recommended if you want to catch it, but it's not mandatory.

As Adult Link, go to the fishing pond at NIGHT and rent the fishing rod. Use the Iron Boots and the Zora Tunic to be at ease underwater and spot the eel at the bottom of the pond. Then, go back to the surface, cast your line as close as possible to the eel and catch it like any other fish (but it's really hard!). The owner will give you 50 rupees for this catch, but since it's very rare, he won't keep it in the fishtank.

Note: This fish can also be caught as Young Link, but only if you have the patience of a saint!

According to Maïckel, when you see circles around your lure, it's the eel, and to catch it, you must move your lure to place it in a circle (hard because it's moving around it). 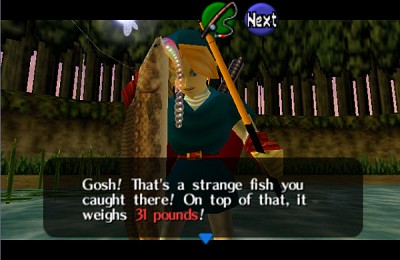 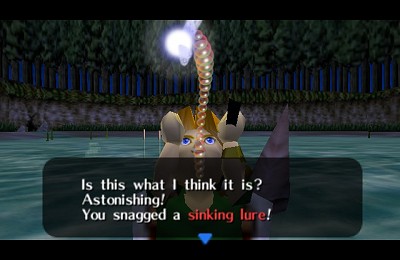 Thanks to Alexandre and his friends for these secrets! (personnaly, I still haven't caught it) 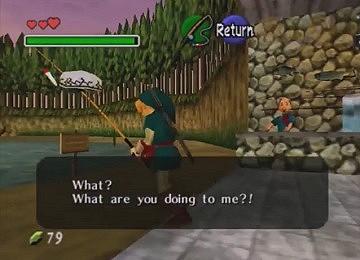 At the Fishing Pond, there's another funny thing to do: steal the owner's cap!

To steal it as Adult Link, you have to:
- Rent the fishing rod
- Stand in front of the man, far enough so that if you cast the line, the hook lands roughly at the owner's level.
- Cast the line and do your best to stop it mid-air.

With a good timing and after a few tries, you will succeed to take it.

Another info from Oni-raf: After taking his cap, you can save and shut off the console without giving the cap back. Then turn your console back on and go back to the pond. As a result : the owner's cap vanished God knows where, and the owner offers you to play as if nothing happened. 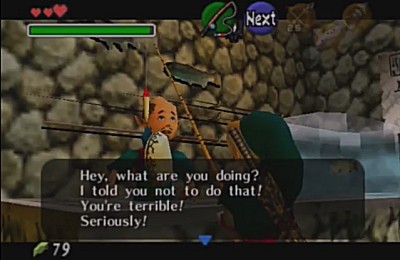 A big thank you to Psyche Rock, Greg, Sheik2 and Rémi!