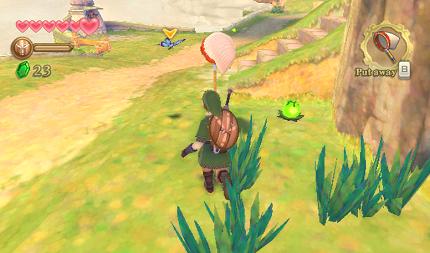 Insects can be collected from the beginning of the game, but to do so, you have to buy the Bug Net at Beedle's Shop. These little creatures will be used to upgrade your potions.

To catch one, select the bug net, get slowly closer and use the controller as if it was a net! Or, when some insects fall on their back after running into a tree, just get close to them and pick them up.
Ask Fi while locking on one of them to get more information.

Their locations are more or less random, you will not always find them in the same place, but each kind remains in one or several defined areas. Wearing the Bug Medal increases your chances to find some.

A big thank you to Do A Barell Roll who has writen all of the "A bit of grinding" sentences.

Here are the bugs' locations:

Full inventory: Go to Skyloft, do a roll against the mill in the centre of the island and walk on the sky stag beetle(s) to pick it/them up. Then, get in the nearest house (Piper's) and do it again!

Full inventory: This bug appears only in Skyloft, you can only find one per location and the places where you can find them are far from each other. The Bug Medal is thus very useful. Mark its usual locations on your map (left of the Knight Academy in pots, close to a wall left of the Bazaar in a pot, next to the stream in the middle of the grass, in the centre of the pumpkin field on the right on the map), and if the medal shows a bug there, go collect it, it will be a mantis for sure!

Blessed butterflys can be caught wherever there are Gossip Stones and Goddess Walls.

Full inventory: These bugs are very common, collecting them is a child's play. I recommend keeping this quest for when you'll be searching for Grasshoppers or Rhino Beetles behind the Sealed Temple.

These rare insects can only be found at night, often above the stream. They shine and therefore are easy to spot.

Full inventory: Go to the Pumpkin Landing, sleep until night, then get out through the pumpkin field exit. Everytime you go through that door, between 0 to 4 Starry Fireflies will be waiting for you in the field!

Full inventory: Land on the Viewing Platform (in Faron Woods), go into the Deep Woods, and walk on a little to find a nest. Get close equipped with the bug net, then, when the hornets attack you, wave your net in all directions. You will get 10 hornets. Make the nest fall with a roll against the tree, then quickly use the net to catch the remaining hornets. Leave the area then come back and start again.

Full inventory: Go behind the Sealed Temple where between 0 to 2 Rhino Beetles walk on the wall facing the bird statue, below Gorko. Roll into the wall to make them fall, then simply walk on them to pick them up. After that, go in the small recess on the left while heading towards the temple's entrance, where sacred butterflies are flying: you will find up to two additional Rhino Beetles on the wall ahead.

Full inventory: Eldin Rollers are often crawling freely in front of the Earth Temple's entrance. Therefore, unlike those you dig up, they won't try to escape. So get in and out of the temple to find more of them!

Full inventory: Go to the Volcano Summit, near the waterfall. Up to 4 volcanic ladybugs stand on the wall next to the "door". Simply go out and back in to see more volcanic ladybugs. It's therefore very easy to get a large amount of them in a few minutes!

Full inventory: In the Lanayru region, in the Desert Gorge, from the bird statue of the same name, head towards the cart, then right towards the rocky peak. You will find from 0 to 4 dragonflies. Get close slowly and prepare your Bug Net when they're at the right distance. The missed dragonflies will fly away. If they moved out of reach, wait and don't move, they will come back after some time. When they'll be finally caught, head to the nearest exit (the one leading to the beginning of the desert), then come back to make new dragonflies appear.

Full inventory: In the Lanayru Desert, walk along the warehouse, find a recess behind a pillar and go ahead all the way. Dig in the two holes, each one contains ants, up to 6 in total. Get in the warehouse, get out and repeat!

The Sand Cicadas can be spotted from far away thanks to the sound they make. Listen carefully and walk slowly to capture them.

Full inventory: Go on the roof of Skipper's Retreat, catch the cicadas, go down, get inside and go out once more to make other cicadas appear on the roof. Be careful not to make any sudden move or they would fly away.

Full inventory: Go behind the Sealed Temple, in the large area beneath Gorko. Lift the stones to find up to four grasshoppers. When a grasshopper makes its first jump, get close slowly and catch it. Next, go in the temple, capture the grasshopper that's almost always in the pots on the right, behind the Bird Statue, then go out and start again.