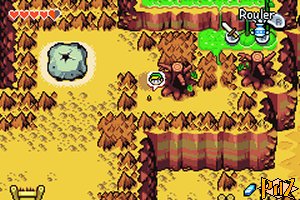 If you want to, drop a bomb against the wall, get in and talk to the Business Scrub. Pour the water from the bottle on the short plant, then climb using the vine. Go on west then south. Blow up the wall between the two poles and get in. Upon leaving, blow up the cracked wall again, then jump on the rock and shrink. Go right, go through the passage while avoiding the rocks and get close to the pond. Refill your bottle with Mt. Crenel Mineral Water, then come back and go back to your usual size. Go on west until a cave. Get in and talk to the Business Scrub. Buy bombs if you're almost out of them, and get out. Go back a little to the right, blow up the wall on the right of the second tornado, get in, use the toadstool to go across and go up. Get out to the right and get close to the edge. Jump into the tornado, then fly towards the following one and climb the steps to the north. Go right and vacuum the white spikes with your Gust Jar to uncover a small hole, along with a rock lower. Shrink, then get into the hole. Speak with the Minish and open the chest withholding a Kinstone. Then go left towards the plant. Follow the passage, lift the plant, carry it out of the passage and toss it into the big hole. Go back to the rock and grow. Pour the Mt. Crenel Mineral Water on the plant and climb it. 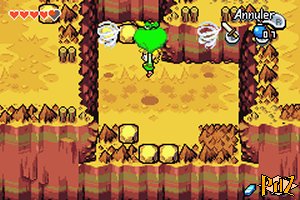 Go right, get on the bridge, blow up the wall and get a Kinstone in the chest. Go up, blow up one of the cracked blocks and push the blocks to get out. Go left, jump into the tornado, get into the other one and go left. Climb the steps, go right and drop a bomb between the small poles. Talk to the Business Scrub and pay 40 rupees to get a Grip Ring. Go back left, go down the stairs again, go left, jump and go left again. Climb the great wall while avoiding the rocks. You can make a stop at the beginning to the east. Drop a bomb between the poles, toss a bomb in the fountain and talk to the Great Fairy to get the Big Bag of Bombs. Upon reaching the summit, go left, go down the stairs and get in the cave. Speak to the Crenel Hermit. You can also fuse some Kinstones with him. Go back to the summit, go right and go across thanks to the toadstool. 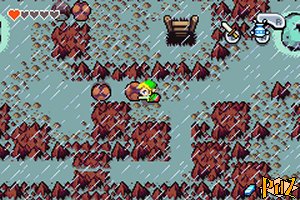 Get on the rock, shrink, then go down. Cross the passage while avoiding the water drops, then go close to the rock and grow back. Roll the rock into the hole, then go right and push the other rock in the hole to the left of the ladder (while going over the first one). Be careful not to block the rock, if so, shrink and grow to start again. Push the third stone and go down the ladder. Go down and push the blocks on the left to get out. Go right and get in the next cave. Stand on the right of the toadstool and use the Gust Jar to draw the pots at you. Then pull the toadstool to go across and go up. Go down to the right to spot a button. Stand in front of the beginning of the bridge, drop a bomb, lift it and toss it next to the button. By exploding, the bomb will switch the button and create a bridge. Get out and get in the next cave. Roll the rock into the hole, push the statue and go on. Push the blocks to find a Kinstone in the chest and get out. Shrink on the rock, then go through the passage.