Call Irene to return to Kakariko Village, then head to the northwest of the village and enter the forest. 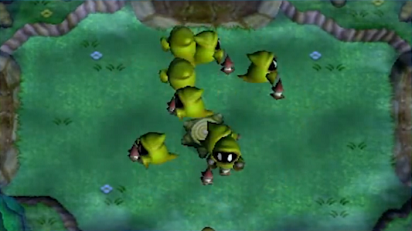 Continue northward until you see a sign "Lost Woods ahead", enter the log to the north, and the next one. Eight ghosts are waiting for you. First look closely at the ghost who speaks and follow him when he leaves the screen. (The sequence is different for each player.) Next, you need to watch two ghosts and not follow them. Then again, there are eight ghosts and you need to watch three of them. Each of them leaves in a different log, so, as you must not follow them, you have to leave the screen from where you arrived! Keep following the path until you arrive in a clearing. Walk up on the pedestal, move behind the sword and pull it out. You get the Master Sword! which fires a beam when you're at full health. Again you hear Sahasrahla's voice, who says that now you can break the barrier surrounding Hyrule Castle.

Go back to Hyrule Castle, Sahasrahla is there and urges you to break the barrier. Go near the gate and strike it with the sword to destroy it. You now have to find Princess Zelda! Enter the castle, walk up the stairs on the right (or on the left), go right (or left) and go out to the south. Go left (or right) and go inside the castle anew.

Go in the next room, a dangerous soldier is waiting for you! Beware his ball and chain! As soon as he throws it to you, move sideways to avoid it, then rush at him and slash him. Repeat this several times to defeat him! Continue right, get rid or avoid the three guards, then climb the steps up to the... 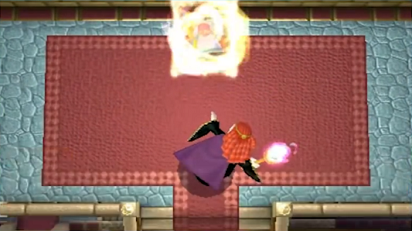 The princess is here! And Yuga as well! He succeeded in gathering the Seven Sages, Impa being the last one. Zelda asks him whether he is trying to revive Ganon, but he doesn't answer and casts a spell on her to add her to his collection of paintings. He is surprised to see you free and leaves. Climb the steps up, defeat the guards, then go upstairs to the... 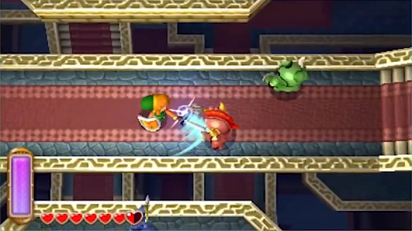 Go south, climb the steps up and take the path to the east outside. Head north and go inside again, then walk up the stairs to the...

Recover a few hearts if you need some, climb the steps up to the south, then walk up the stairs at the centre which lead to the... 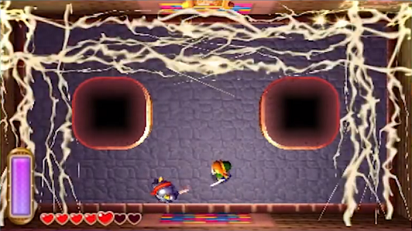 You meet Yuga, again admiring his work, the painting of Zelda. Then he turns to you to attack you! He creates two clones of himself, uses the walls to move around, then exits and casts spells. Run to one of these Yuga and slash him as much as you can. Afterwards he sends guards that you must defeat. Continue striking him until he gives up. He confesses trying to release Ganon to get rid of lowly creatures like you, before fleeing.

Go out on the balcony to the north, head left and enter the large office. Go near the curtain to the north and tear it down with the sword. Turn into a painting and enter the slit. After having moved in a strange dimension of sorts, you go out in the same room; but is it really the same?