Epona at the Ranch Romani and I want more!

Epona at the Romani Ranch 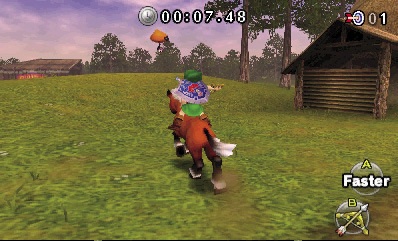 Now you can take back your beloved Epona, as she is required to get to the sea area. For this, you need to be on the first day (not night) and have a Powder Keg with you. If you didn't make the boulder explode in front of the Goron Racetrack, go to the Goron Village, in the cave to the north of the area, talk to the big Goron and he will give you a keg. If you can already carry kegs, go to the Bomb Shop in West Clock Town, talk to the Goron as Goron Link and buy a Powder Keg for 50 rupees.

Play the Song of Soaring and choose to the Milk Road, then go west and drop the keg right in front of the boulder. Next, get in the ranch, follow the path and talk to Romani, the little girl. She tells you about creatures coming at night to steal her cows and proposes to train you. Agree to help her, so she lets you have your horse. If you can shoot down at least 6 balloons in less than two minutes she will let you keep Epona. After the training, she teaches you Epona's Song and will be added to your notebook. You can accept to help her chase the creatures now or later. 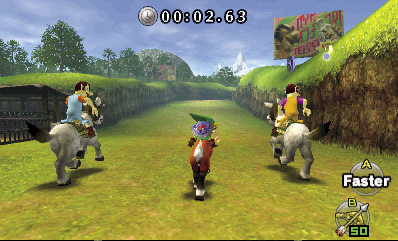 Again you can either pursue the main quest by going to the sea side or get more items: two masks (the first one is mandatory later) and a bottle.

If it's still daylight and you have at least 10 rupees, you can ride Epona, leave the Romani Ranch and follow the path towards southeast. At Gormans' Horsetrack, talk to both men and pay 10 rupees to start the race. In order to win, you must cross the finish line first, so stay as close as possible to the wall/fence on the right and jump over fences. You will be rewarded with the Garo's Mask. 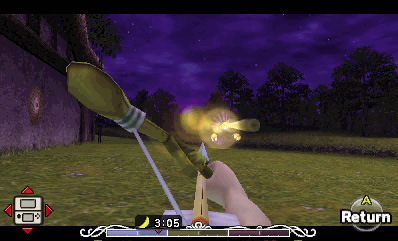 If you want to help the Romani Ranch, you have to be in front of the barn at 2am on the first day. Romani will come and give you information. Get out and choose to ride Epona or not, but this quest is easier on foot and using the Bunny Hood. The creatures will start coming. You have to prevent them from reaching the barn by shooting arrow at them. Be careful and don't go too far away since they also come from behind the barn. Have a look at the map to see their position. If you're successful, you will be granted a new bottle full of milk.

If you got the new bottle, go back to the barn on the second day. Talk to Cremia, who plans to take the milk to town, then come back to Romani Ranch in front of the barn at 6 p.m. Talk to the girl in the cart, then say you would like a ride. On the way, Cremia tells you about her life, Romani and her friend Anju. When you are attacked, never stop firing arrows at both pursuers to push them back. If at least one bottle made it, you will be rewarded with Romani's Mask, a proof that you are a member of the Milk Bar. Wearing this mask, you can buy Milk (20 rupees - fill up to five hearts twice) or Chateau Romani (200 rupees) in this bar. The Romani milk grants you a maximum magic level until you play the Song of Time again.