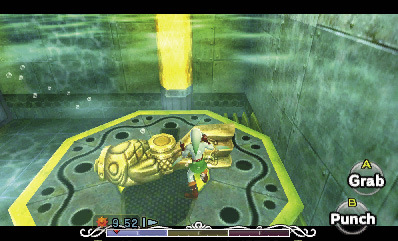 Before opening the door in front of you, use your Fire Arrows to light all four torches in the room and find the 1st stray fairy in a chest. Then open the door, wear the Zora Mask, jump into the water and swim towards northeast. Dive, grab the yellow "tap" underwater and push it. Water will flow in the yellow pipe and create a kind of water platform. Go back near the entrance and take the 2nd fairy under the ledge. Jump on the right lift (when you are facing the door), then on the ledge in the southwest corner and beat the Skulltula to get the 3rd fairy. Go back near the door, jump on the other lift, then on the ledge. Next, as Link, jump on the water geyser and to the other side. Walk on the pipe and go north to find the main room.

Jump on the left and climb the ladder to get the 4th fairy in a barrel. Then fire an arrow at the pot underwater at the centre of the room and attract the 5th fairy to you with the Great Fairy Mask. Then jump in the water, dive a little and follow the stream to get in the southeast passage. 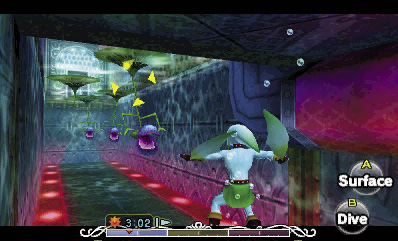 In the next room, climb on the northern platform, then throw your Hookshot at the big chest to get the Dungeon Map. Use the Hookshot on the pots on the other side to break them and get the 6th fairy. Next, dive to the bottom of the room and look at the hands in the passage eastward. Get rid of both hands using your fins, then go ahead and clear the room from Deku Babas to make a chest appear containing the 7th fairy (one is hanging from the ceiling).

Open the next door, look at the water on your right, fire an arrow at a pot guarded by two hands and put on the Great Fairy Mask to attract the 8th fairy. Then use your Hookshot on the chest on the west side (be careful with the bomb creature) and pick up the Compass. Then, dive, get rid of the enemies underwater and pick up a Small Key in the chest. Go back near the southeast door and jump in the flow bringing you back to the main room. Dive to the bottom, then take the red path leading northwest and come back to the surface. Look for a red pipe getting out of the water, climb on this pipe, get rid of the bomb creature and unlock the north door. Break all the pots to have lots of arrows, bombs and magic, then open the door. 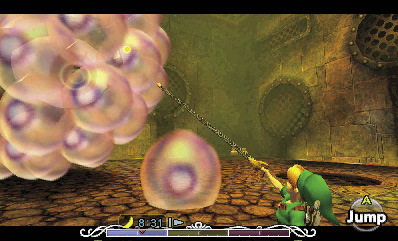 Look upwards to find Wart. To begin with, you need to destroy all the bubbles with bombs or using your hookshot, then with the sword. Then, when its eye is wide open, fire arrows at it if you still have some left, throw bombs or strike it with the sword. Pick up the Ice Arrow in the chest, then get out, break the pots again and go back to the main room.

Dive to the bottom, take the path south, then again follow the flow to get in the southeast passage. Get rid of both hands again, take the passage eastward and open the next door to go back to the room where you found the Compass. Now fire ice arrows in the water (where the water glows - on 3DS) to form ice blocks that will allow you to reach the north path. Break stalagmites, shoot a fire arrow to melt the ice and open the next door. 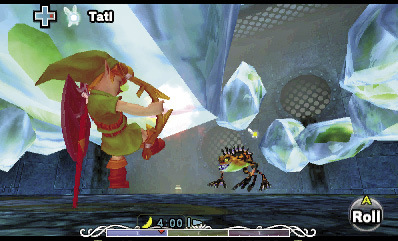 First, hit Gekko with your sword, then all the bubbles will get together on the ceiling. Quickly fire an ice arrow at this mega bubble to freeze it, then strike Gekko and repeat this until he is defeated. Open the unlocked door and find the Boss Key in the chest. Throw your Hookshot through the cage opening at the target on the ceiling to get out of the cage, then go back to the main room.

Come to the surface, climb a ladder to the east, then jump on a blade and climb on the green platform. Fire an ice arrow at the top of the waterfall to stop it and have access to the ladder. Climb it and open the next door. Use your Hookshot on a barrel to the left, then fire ice arrows at the glowing water to reach the platform to the northeast. Push the green tap, then come back to the platform with barrels. Fire ice arrows to reach the northwest corner, then throw the Hookshot at the target on the ceiling to go up to the second floor. Find the 9th fairy in the chest, then use your Hookshot at a target to the north to get a red rupee and fall to the first floor. Open the door to go back to the main room. 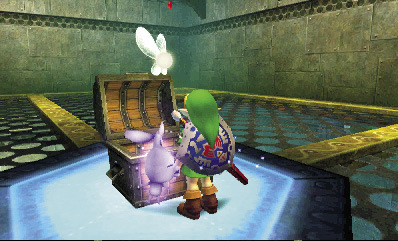 Once again take the southeast path at the first basement level. In the next room, get on the platform with the chest, fire ice arrows to get to the southern platform and open the door. Stand near the platform with the tap and when the jelly enemy gets close, fire an ice arrow at it to freeze it. Climb on it, get rid of the bomb enemy, then push the red tap which will let more water flow. Again, come back to the main room. Dive to the bottom of the water, take the red path to the northwest, then come to the surface. 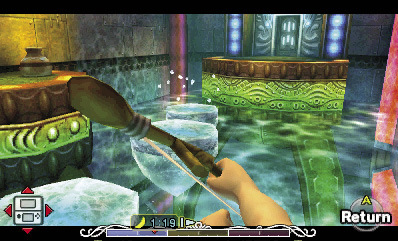 Climb on one of the platforms to the south, then fire an ice arrow on an enemy to freeze him. Jump on him, then to the central platform and push the red tap. Come back to the main room using the south passage, then come to the surface.

Climb on a blade to reach the south part of the room and go south (to the second room from the start). Look at the ceiling on your right (northwest corner), use your Hookshot on the target, then jump on the platform and push the red tap. A geyser comes out of the red pipe, which stops the waterwheel. Now, go on the yellow platform and push the yellow tap: The waterwheel will now turn in the other direction. Come back in the main room, dive to the bottom and follow the green passage towards southeast. 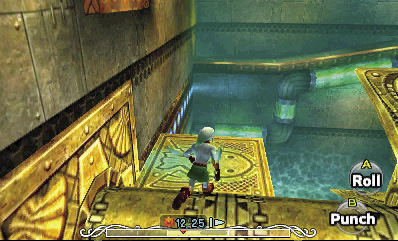 Climb on the green pipe to the east and straight away look right under the central platform. Throw your Hookshot at the bubble to free the 10th fairy and wear the Great Fairy Mask to attract it. Walk on the green pipe, push the tap, then dive to the bottom of the room and go to the northwest corner. Use the fins attack to pop the bubble holding the 11th fairy, then walk slowly into the passage to get it and be brought back to the main room.

Take the now accessible passage to the northeast, at the first basement level to reach a new room.

Go to the northwest corner, come to the surface and climb on the platform. Jump on the lift, then on the spinning axis and again on the other lift. Look towards southeast to see a torch, use your Hookshot to reach it and find the 12th fairy in a nearby chest. Come back to the second lift and jump on the ledge to the east. Then go southeast and fire an ice arrow at the waterfall to freeze it and stop the horizontal blades. Move on the axis, walk north and climb on the small wheel. Look northwards, throw your Hookshot at a chest and open it to get the 13th fairy. Come back on the main blades, jump towards the door to the southwest and open it. 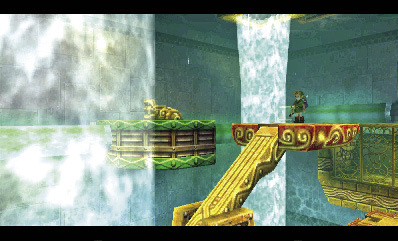 Dive into the hole nearby and rush into the barrel while swimming to get the 14th fairy inside. Now stand on the seesaw to the south and shoot a fire arrow at the ice over the other end to make it tip up. Then jump on the seesaw to the north, do the same, then jump on the green platform with the tap and for the last time push the tap! Next, walk on the green pipe to the south and jump in the cage on your right when you cannot go ahead anymore. Use the Hookshot on the chest to find the 15th fairy. Now jump in the water, climb on the nearest seesaw and shoot a fire arrow at the ice over it to go up. Jump on the ledge south and open the door to the southwest to be back in the room where the map was. Come back to the main room, dive and take the green passage towards south.

Come to the surface, walk on the pipe and jump on the geyser to reach the boss room. 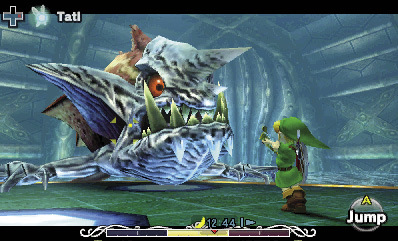 This boss is quite tedious to defeat since his attacks are all dangerous. Don't forget that you can buy red potions in Clock Town. Jump in the abyss.
3DS: During the first phase, you have to fire arrows at Gyorg's back when it's visible. After 4 or 5 hits, he will show his weak point: the eye in his mouth. Quickly shoot more arrows at this eye, or if he's near the platform, strike it with the sword. Repeat this twice to start the second phase. As the central platform disappears, put on the Zora Mask. Swim near him but not too close as he could swallow you! If you're not a good swimmer, you can stay at the bottom of the water to follow him. As soon as he stops and grunts, punch a spike mine near him to dislodge it so the boss swallows it! The mine will explode in his mouth, which will make the eye go out. Quickly punch it with your fins and feet or swim towards it using the barrier attack. Repeat these actions several times until he's defeated. When he sends piranhas to you, punch them or use the barrier attack and pick up the small hearts they leave.
N64: To defeat him, the easiest way seems to be to stay on the platform as Link and move toward the edge to locate him. As soon as you see him, use the Z-targeting and fire an arrow. If he's injured (he grunts), quickly wear the Zora Mask, dive and use the barrier attack to hit him once. Then right away, come back onto the platform, remove your mask and repeat these actions four times. If he catches you, you lose a lot of hearts, so stay on the platform. If he jumps out of the water, don't stay at the centre of the platform, as he could catch you. The fact of falling when he hits the platform doesn't hurt you, but quickly get out of the water. When he calls his fishes, there again, you should get out of the water very quickly. Another method consists of staying at the bottom of the water and use the boomerangs, but it's more dangerous. 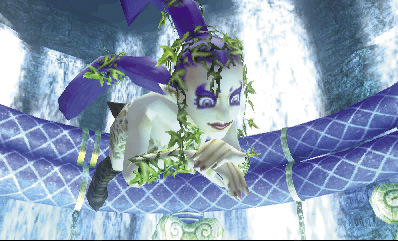 Once beaten, you can pick up the Heart Container and Gyorg remains.

Once back to the Zora Cape, if you got all 15 stray fairies, bring them to the Fairy Fountain. To get in, leave the Zora Hall and go back to the beach. Jump on the rocks, then use your Hookshot on the first palm, then on the next two ones. Next put on your Bunny Hood and jump towards the rocky ledge where they are two huge rocks. Place a bomb near these rocks and get in the Fairy Fountain. The Great Fairy of Courage doubles your damage resistance capacity.