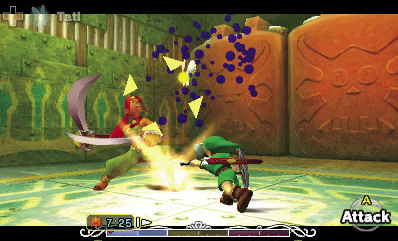 Use your Hookshot on the plank over the fish tank to get into it, wear the Zora Mask and put the first egg in an empty bottle. Leave this room, put on your Stone Mask, climb down the stairs and use the Hookshot on a pillar to the south. Go southwest, throw the Hookshot at another pillar higher to the south, then follow the path to the south (behind you). You are in a room full of barrels. Cross the room and open the next door. Fight off the pirate (with the Gilded Sword, it is quite easy), then open the next door, use the hookshot on the plank over the fish tank and pick up the second egg. 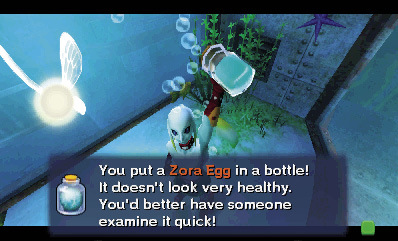 Continue towards north. Head to the centre of the courtyard and take a picture of a Gerudo pirate, then go north, throw the Hookshot at pillars to go up one level and get in the passage northwest. Open the door on the left, fight the pirate, then take the third egg in a bottle like you did with the first two ones. Go on, head north again, use the Hookshot on the pillar, then on the next one, climb on it and throw it again on another one to the northeast. Cross the bridge and open the door. Open the chest to find a silver rupee (100 rupees), then open the door southwest. Fight the pirate and pick up the fourth egg in a bottle.

Now, go to the laboratory, drop the eggs in the fish tank (the three remaining eggs are elsewhere), then go back to the Fisherman's Hut. Look at the seahorse, then give the pirate's picture to the fisherman so he will lend you the seahorse. Leave the hut, get into the water and swim northwest towards Pinnacle Rock indicated by two squares on the map. 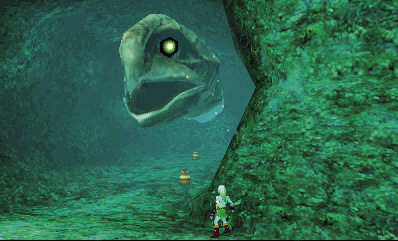 Dive to the sea ground and right after the sign, empty your bottle with the seahorse. The animal says that dangerous sea snakes live here and that its friend is trapped somewhere. Follow it from sign to sign and into the snake lair. Dive to the bottom, go northwest and fight the Deep Python by hitting him twice with the "barrier" attack. Take the egg in a bottle, then go up one level and get rid of the snake to the southeast to find the sixth egg. Once more get up one level, fight the snake to the west and pick up the last egg. To get a Piece of Heart, attack the other snakes until you find the seahorse's beloved one. Finally, leave Pinnacle Rock by coming to the surface and go to any direction. 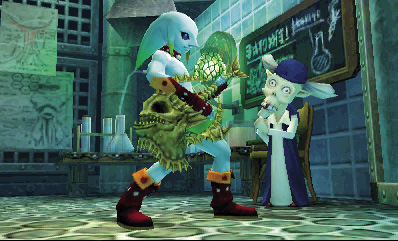 Go back to the laboratory and pour these last eggs in the fish tank. Then look closely at the fish tank, the Zora children will line up to compose a song. Use your "ocarina" and play the music notes as Zora Link to learn the New Wave Bossa Nova. Soar to the Zora Cape and as Zora Link, play the New Wave Bossa Nova to Lulu. When the turtle gets out of the sea, take off your mask and throw your Hookshot on a palm to climb onto its back. The turtle takes you to the next temple, whereas the Gerudo Pirates cannot make it.