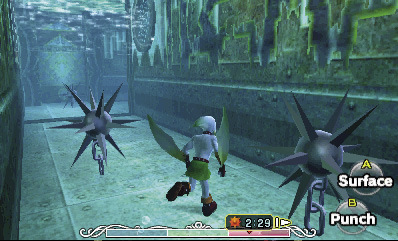 Take off your mask.
N64: Wear the Stone Mask to get invisible to pirates.
3DS: Beware the pirates, who should not see you.
There is a piece of land in the north. So swim northward (N64: or ride a boat), then climb the slope and look for a stab like in the Snowhead Temple. As Goron Link, stand and pound this slab to raise a grid in the southeast part of this area. Wear the Zora Mask, dive and swim southeast underwater to find a corridor behind this grid.

Go ahead and slam all the planks on your way to break them. Pull the first stone block, then go left up to the second block. Push this one, then follow the corridor and let the water flow propel you higher. Be careful with the mines and the stream that could push you aside, then come to the surface and open the door. 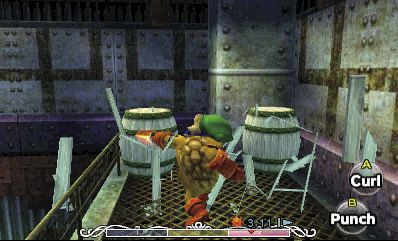 Go up the slope, climb the stairs and break or climb barrels to find a switch. Put on the Bunny Hood, then step on the switch and rush into the now opened cell downstairs. Pick up the Piece of Heart, then step on the other switch and climb back the stairs. Fire an arrow at the diamond or use your fins as Zora Link, then wear the Zora Mask, quickly jump into the water, dive and run south before the grid goes down again.

Walk towards the strong stream, come to the surface and swim quickly to cross it, then continue to the ladder and climb it. Step on the switch, then quickly stand on the sewer grid, fire an arrow at the diamond to rise upstairs and move a little to go out of the water flow. Climb the next ladder, fire an arrow at the diamond behind the mines then jump and open the door leading outside. 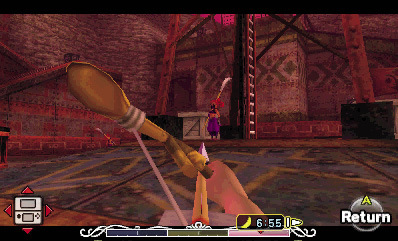 N64: Put on the Stone Mask.
Move along the wall towards north and get in the Fortress' core.
N64: Walk toward the centre of the plaza.
3DS: Beware the pirates, hide behind the large crates and walk toward the centre of the plaza. Use the Lens of Truth to see a lost soldier next to a wooden crate near the ladder. Talk to him and give him the Red Potion. As a reward, he gives you the Stone Mask and Shiro is added to your notebook. Quickly wear the Stone Mask to become invisible to the pirates. 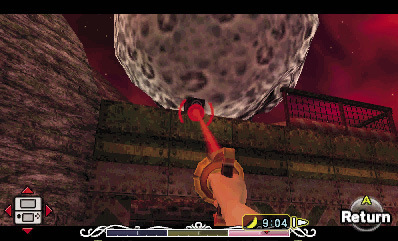 Climb the ladder of the watchtower, cross the bridge and open the door. You will notice a bee flying to a hive, then hear a conversation between two pirate women. They talk about a treasure they lost, the Zora eggs, and say that four of them are here, while the other three are probably in Pinnacle Rock. Fire an arrow between the bars at the hive. After they run away, go right, jump lower, then open the chest to find the precious Hookshot!

Now you have to find all 7 eggs without playing the Song of Time. To make it, you better have at least three bottles and you should maybe play the Inverted Song of Time. When all your bottles are full (with eggs), soar to the beach, get in the laboratory, climb the ladder next to the huge tank and empty your bottles inside it, then go back to the Fortress, get on the yellow stab and shoot your Hookshot at the target to get in the court.