Ocarina of Time tips and tricks

Gold Skulltulas (and their rewards) 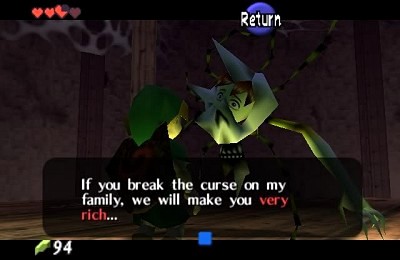 In Kakariko Village, a family, whose house is located on the south-west, is under a curse. To break the spell, you must destroy the Gold Skulltulas and collect Tokens. Sometimes, you won't be able to reach a Token without the Boomerang or the Hookshot. There are 100 Gold Skulltulas in Hyrule, when you get rid of all the ones present in a dungeon, a skulltula icon appears on the dungeon map. When you have gathered a given amount of Tokens (see below), go in the House of Skulltula and talk to a child.

More pics on the Gold Skulltulas 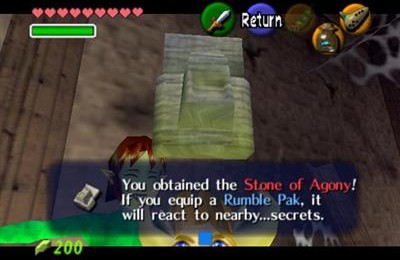 Note that once you got the huge rupee, you can get out of the house, get in again and talk to the man to win another identical rupee!

* The Rumble Pak is an accessory which is bought separately and plugged on the game controller. The Stone of Agony and so the Rumble Pak are specificities of the N64 version of the game: the said item was replaced by the Shard of Agony in the 3DS version, which gives the player the same advantages in game without buying any spare part for their 3DS.

Inside the Deku Tree

Bottom of the Well

Gold Skulltulas located outside the dungeons (often it must be at night!)