Before going in, climb the vines on the right, move to the left and go down on the branch. Get rid of the Gold Skulltula, then shoot the Hookshot at the chest and pick up the Small Key inside. Now enter the temple, get rid of the Skulltula and get in the big room. 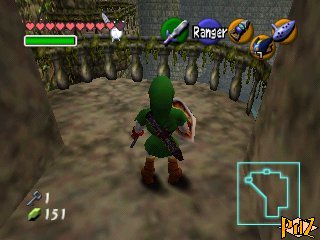 After the four ghosts appear, open the door in front of you at the back of the room. Get rid of the Blue Bubble with the Hookshot then the sword, and open the next door. To defeat the Stalfos, use the Z lock and the Hookshot, then the sword. Take the Small Key in the chest and break the pots in this room, one of them should hold a fairy. Go back to the big room and go right towards a big blue block. Play the Song of Time and go ahead, you are in the western "green" room.

Go right and look at the vines. Get rid of the first two Skulltulas, climb the vines and sneak past the last one. Open the door and get rid of the skull to get the dungeon's Map. Open the next door, then look at the symbol over the balcony on the left and shoot your Hookshot at this symbol to reach the balcony. Step on the switch, which empties the well, then jump and go to the well. Get down using the ladder, then follow the corridor to find another Small Key in a chest. Climb back using the nearby vines (or using the ladder) and exit through the door, you are back in the big room. 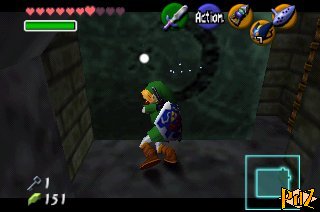 Open the locked door left on the map, get rid of the Skulltula and open the next door. Go ahead, climb the two ladders, then follow the yellow arrows up to a blue block. Push this block so it blocks the transversal corridor (push the block, when you see a corridor on the left, pull it a little). Take a few steps back and climb the now accessible ladder. Next, turn right twice and push the brown block as far as possible. Turn around, go left, ahead, and jump to the lower floor. Go back to the first block, push it as far as possible, then turn around to find the other side of it and push it again as much as possible so it falls slightly. Climb on the block, then on the wall on the right and you find the second block back. Push it as far as possible, then climb on it and on the wall in front of you. Continue on the right, climb the ladder and keep going until you reach a locked door. 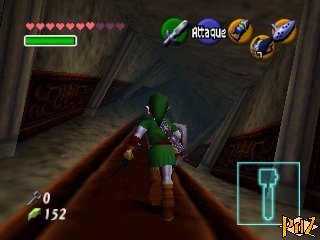 Get in, cross the western twisted corridor, jump quickly on the platforms to the right (to avoid the Wallmasters falling from the ceiling) and unlock the door to reach the western great stairs. Climb down the stairs and open the door. Fight the Stalfos while avoiding the hole, then quickly get rid of the next two Stalfos, otherwise they will reappear. You get the Fairy Bow from the chest. Open the next door leading to the eastern great stairs. 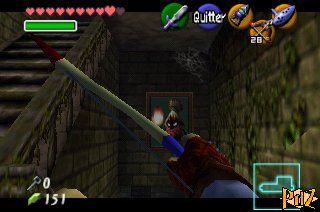 There is a blue ghost, one of the four sisters of the Sisterhood of Spirits, in one of the three frames. With your bow, shoot three arrows at her, without being too close or she will flee. Afterwards, she will start to spin, wait for her to stop and shoot an arrow at her. After picking up the Compass, backtrack, go through the room with the Stalfos and fight the red ghost like you did with the previous one. You will get a Small Key. Climb the stairs and cross the western twisted corridor again to come back to the room with the two Bubbles, the one right after the "blocks' room". 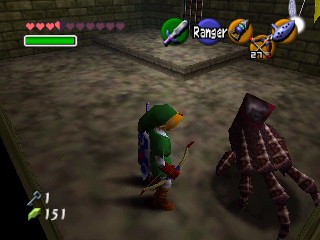 You can find an eye above the door you just came in from. Use your bow to hit it, then go back to the corridor (not twisted anymore). This time, jump to the bottom and open the golden chest to loot the Boss Key. Next, jump into the hole, and get rid of the two Bubbles with the Hookshot then the sword. Open the door, you are now on the balcony of the western "green" room. To get a Gold Skulltula, jump on the arch and look for it at the end of the path, on the wall. Walk along the balcony and open the door on the right. Fight the Floormaster with the sword, and when it is splitting, quickly get rid of the smaller hands and you will get another Small Key. Get out, open the door to the right, jump down, follow the path again climbing on the two blocks, then hit the eye again to twist the corridor. 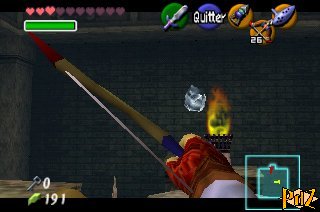 Follow the western corridor, climb the western stairs again, walk through the Stalfos' room, the eastern stairs, then open the locked door. Head right (jump, then climb the ladder), follow the eastern "twisted" corridor (which isn't twisted anymore) and get rid of the green Bubbles. Open the locked door and jump on one of the spinning blocks. There you will need to wait to be facing the eye, with the torch between you and the eye, then shoot an arrow at this precise moment so your lighted arrow will melt the ice and hit the eye. Go back to the corridor (now twisted) and in the next room, jump through the hole to reach a squared room. 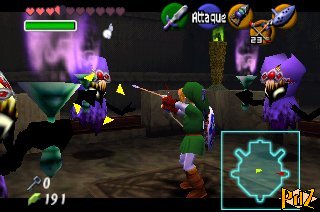 Take a few steps to see the ceiling falling down. When it goes up again, run to the switch and stay there until the ceiling falls down again. When it's going up again, go on the slab to the left of the small chest. Pick up the arrows, then, when the ceiling is going up, rush to the door at the back of the room. Now shoot an arrow at the portrait and put it back together with the blocks. Look only at the top face of each block, the black one is useless. Next, get rid of the green ghost like you did before, open the door, get rid of the Skulltula and go on. Once back in the big room, get down from the balcony and you will see the last ghost. When she multiplies, look at her carefully, one of the four ghosts will spin, she is the genuine one you have to shoot an arrow at. After a few hits, a lift will appear.

Take the lift, then push one of the big blocks clockwise. The room will spin, go through the now-accessible doorway, open the chest and get rid of the Gold Skulltula or stand on the switch. Push once more one of the blocks in the same direction to discover a recess. You have to repeat these steps several times to step on all three switches so that the corridor leading to the boss room is finally accessible. Follow this corridor and open the boss door. 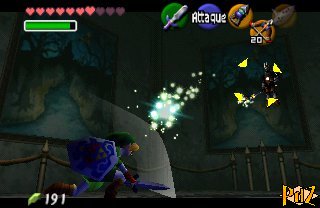 Climb the stairs and stand on the Triforce symbol. When you try to leave, the barrier closes and Phantom Ganon appears. At first, he is horse-riding between the different paintings. Each time, you can see him in two different paintings. Turn round to check all the paintings and shoot an arrow at him when he is about to get out of the frame (you can see a purple glow). If you shoot at the wrong one, he will cast lightning at you. After hitting him three times, he will start to fly around the room. You can use the shield to protect yourself from his attacks, but to get him, you have to throw back his lightning at him with the tip of your sword. (If you hit too late, you will destroy the lightning but not throw it back). When he's hurt, he will fall to the ground, run to him and strike him with your sword. These actions are to be repeated several times, of course. Then, pick up the Heart Container and step into the light. 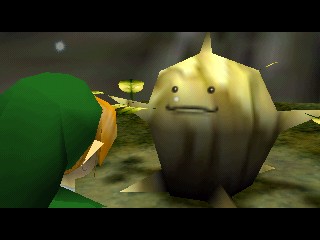 You are back in the Chamber of Sages and Saria becomes the second Sage. She entrusts you with the Forest Medallion and a new Deku bud tells you about how you arrived within the Kokiris.

From this moment on, you can turn back into Young Link (then into Adult Link) simply by placing the Master Sword/Kokiri Sword into the pedestal in the Temple of Time. When you do this the first time, Sheik teaches you the Prelude of Light.

You can now go to the next dungeon (go to the Goron Village), or, as Young Link, get the Lens of Truth. For the second option, if you don't know the Song of Storms yet, go to the Kakariko Village's Windmill and take out your ocarina in front of the musician to learn this song. Then, as a child, go to Kakariko Village.