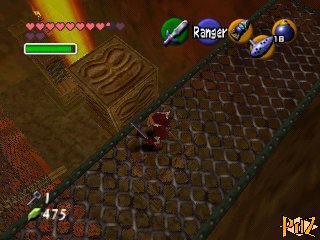 Climb the stairs, go left and get in. After talking with Darunia, jump from platform to platform to the left and step on the switch to free the Goron. Talk to him, pick up the Small Key in the chest at the back of the room, then come back to the previous room. Go straight ahead and unlock the door. Here, use the bridge and the moving platforms to follow the small corridor on the left. Open the door and free another Goron, speak with him to get his advices and pick up another Small Key from the chest. Turn around and go to the opposite side (on the right from the entrance door). Blow up the wall, free and talk to the Goron then pick up another Small Key. Finally, turn around, go right and open the locked door. Slide on the plank, then climb up the wire fence to the right, get rid of the two bats and jump on the platform right below. Push the block to the middle of the room, then jump on it to go up one level. 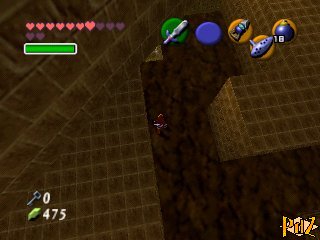 Unlock the next door, climb on the left wall and jump on the other side towards the diamond. Push the block to make it fall, then jump and pull it as much as you can. Next, climb on it, get close to the edge and shoot the Hookshot at the diamond. Turn right, quickly climb on the block, climb up the wire fence as well as the following one before the flames are turned back on. (You can also switch the diamond on from the platform right above it, then climb up the second wire fence.) Open the next door, you are in the "rolling rocks room". Go right and walk along the external wall to find a switch which frees another Goron. Pick up the Small Key in the chest behind him, then turn around and go straight ahead (more or less). When you are on the other side of the room, go to the left to find a door. Open it to free another Goron and pick up another Small Key. Then turn around, go right and walk along the external wall. Open the locked door and go through. 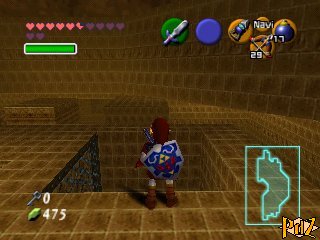 Carefully go to the middle of the room and shoot an arrow at the eye above the door on the right. Open this door and find the Map in the chest. Come back to the previous room, go right and open the locked door. Walk on the narrow path, then quickly jump from one wire fence to another to reach the ground on the other side. Open the door and you will be in the "rolling rocks room" again. Jump on the platform in front of you, get rid of the Fire Slug, then place a bomb where the ground is bumpy. Get down the wire fence, free the Goron at the end of the corridor and pick up the Small Key from the chest. Turn around, climb back up, then jump from platform to platform and step on the switch. Go talk to the Goron you just freed at the back of the room, take the Small Key and come back to the last door you've opened. If you're interested in two Gold Skulltulas, click on the link.

Open the door. Now, jump on the wire fences to reach the locked door and get in. Follow the corridor to reach the Fire Maze room. Go down on the right while avoiding the fire walls, fire turrets and the rocks, go towards the door on the right, get in and pick up the Compass from the big chest. Then, get out and go back to the entrance. This time, go left and open the locked door inside the pillar in the middle of the room. Walk past the Goron and open the next door. Go towards the switch at the back, step on it, then run to the right to cross the fire wall which is temporarily put out. The next door is a fake one, place a bomb in front of it, then go ahead and open the next door. (If you're out of bombs, break the nearby pots.) 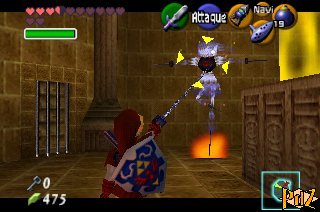 Here is the first of the Flare Dancers. To defeat it, you have to either throw bombs at it, or aim at its head with your Hookshot. When its black head is separated from its body, slash it with your sword, do not run after it, but instead wait for it to go round the room. Of course, you have to do this several times. Then climb on the middle block which leads to the 4th floor. Open the door, climb up the first wire fence, then hit the diamond with the Hookshot and quickly climb the second fence to reach the 5th floor. Open the next door and look at the narrow circular stairs. Then step on the switch, and go as fast as you can to the end of the stairs and open the chest. You just found the Megaton Hammer! Hurray! 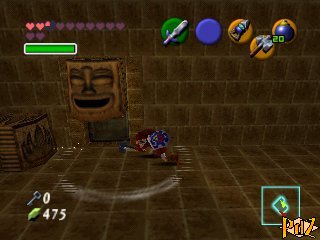 Get down on the right and go near the smiling block next to the door. Smash it with your Megaton Hammer, then jump and smash the statue twice from its side. Open the door, then smash the upper side of another block, which creates some stairs. Take a crate behind you, go down the stairs and place the crate on a switch. Open the door and hit the block with your Hammer, then jump and smash the rusty switch to unlock the door. Get in, play the Song of Time to move the block, then climb on it and jump on the platform in front of it. Smash the crushed switch to free the Goron and take the last Small Key from the chest. Climb back on the block, get out through the last door, then jump on another block in front of you. Smash it with the Hammer, then jump to be back on the main floor. 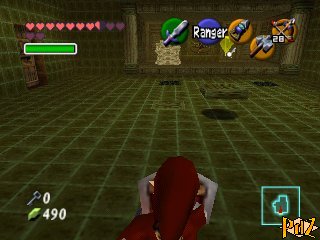 Get out through the door leading to the entrance of the temple (east on the map), then take the stairs and go left towards the statue. Destroy it with the Megaton Hammer by standing on one of its sides, then unlock the door. Get rid of all the enemies and open the next door. Break all the flying tiles with your sword or your shield, then get rid of the Like Like (if you get swallowed, slash it quickly to get back what he stole from you). Pick up the Gold Skulltula token while you're at it, then open the next door and get rid of the Flare Dancer like you did previously. If you ever need bombs after this fight, open the small chest. Then open the next door, smash the rusty switch with the Hammer and take the Boss Key in the chest. Speak to the Goron, then go ahead, climb back the big stairs, go left and open the boss door. Before getting in, you can find some fairies in the pots on the right. 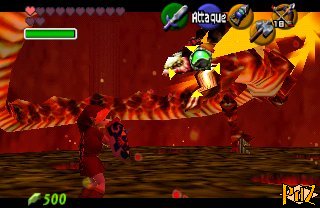 This boss has different attack patterns: he can get his head out of a hole and breathe out fire, completely get out of a hole and breathe out fire or completely get out and make rocks fall down on you. You can only hit it during the first type of attacks. Go to the middle of the room and go back to the door so he appears. Have your Megaton Hammer ready and look at the holes. As soon as his head is out of the ground, run and smash it with the Hammer, then when he's stunned, quickly strike him with your sword. During the other attacks, you can protect yourself with the shield, but never forget to put away the Hammer or your sword before using it. After hitting him five times, pick up the Heart Container and get into the blue light.

In the Chamber of Sages, Darunia becomes the third Sage and entrusts you with the Fire Medallion.

Once back in the crater, go back to the bridge and use your Hookshot to cross the gap. Then go left until you reach two rocks side by side. Get rid of one of them with two Hammer hits to enter the Great Fairy's Fountain. The Great Fairy of Wisdom will double your magic meter. Now head to Zora's Domain through the Zora's River.