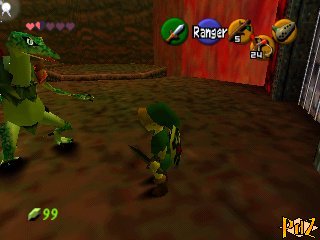 Note: In this dungeon, the Deku Shield can be burnt by the bats, so use the Hylian Shield, except for fighting off the Deku Scrubs. If by any means your Deku Shield is burnt to crisps, you can buy another one for 50 rupees in the first room on the left.

Blow up the entrance in front of you. Go ahead and jump on the lift-like platform, then the middle platform, then jump on the right. Use the Bomb Flowers to blow up the passages north-west and south-east on the map (and the laser creature as well) and take the south-east path. Get rid of Baby Dodongos, go ahead and push a statue on the switch so it stays activated. Open the unlocked door, get rid of the bats and open the next door. Attack the two lizards and open the next door to the west. There is a hidden passage on the right, you can find a Bomb Flower a little bit further to clear it and buy Deku Sticks if you ever need some. Go ahead and get rid of the Dodongos by hitting their tail. Then, use a Deku Stick to light the three other torches and open the door. 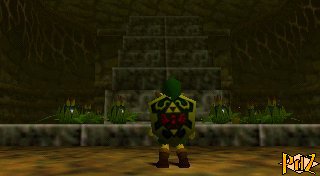 You are back into the first room, step on the switch to unlock a doorway on the other side of the room. Go through the room using the platforms, then blow up the middle passage to find the dungeon Map in a chest. Now take the north-west path, go ahead and use a Bomb Flower to destroy the left wall. Open the door, get close to the middle statue and hit it to wake it up. Use a Deku Nut to stun it and slash it with your sword to destroy it. Open the chest where the statue was to get the Compass. Get out, pick up the Bomb Flower near the entrance from which you came in and drop it in the middle of the two bomb rows so they all explode. Climb the stairs, reach the next door and get in. 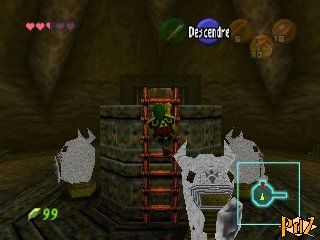 Here are four statues, push aside the one hiding a ladder, climb this ladder and step on the switch. Open the unlocked door, then go through the main room on the hanging bridge. Go down the ladder, go ahead between the platforms, climb on the block, go up the next ladder and jump on the platform on the left (where you can see a Bomb Flower). Open the small chest to get 20 rupees, then throw a Bomb Flower at the wall above the ladder. The Bomb Flower must explode in front of the door! Follow this new path, use the Fairy Slingshot to hit the eye above the door and go on. Get rid of the three Baby Dodongos and open the door. Get rid of the two Lizalfos, then before opening the next door, you can go to the back of the room to pick up two small hearts. Open the door, shoot at the eye in front of you, jump once, look left, shoot at the other eye, then turn round and quickly go ahead. You will be in a room you've already visited, jump in front of you and open the big chest on the right: a Bomb Bag which contains 20 Bombs! If you want to, you can go down and blow up the door on the left to buy nuts and seeds, but you will have to walk all the way through again. 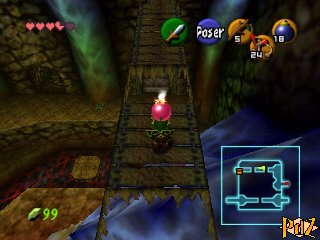 Go ahead, step on the switch, then read the message on the stele. Then go right and cross the bridge. On the other side, behind a wall that you can destroy with a bomb is a chest containing rupees (or a Deku Shield if yours got burnt). Stand in the middle of the bridge and throw a bomb on each side to blow up the skull's eyes. Then, come back near the switch, jump on the lift-like-platform and jump all the way down. Get in the skull's jaw, go ahead and take the right corridor. In this room, go down twice and climb on the block. You can blow up the framed wall to find a Gold Skulltula. Climb on the higher block, go ahead on the narrow ledge and get down. Take the passage and go ahead until you reach another block. Make it fall, then push/pull it towards the middle of the room to reach the boss room. 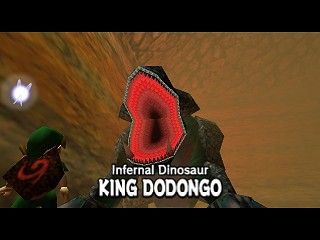 Go ahead, open the small chest in front of you to get some bombs, then blow up the middle of the room and go down. To defeat it, throw a bomb into his mouth when it's wide open (use the Z lock), then slash him with the sword when he's stunned. When he's starting to roll around, use your Hylian Shield to protect yourself and do this three times. If the bomb doesn't land into his mouth, he will breathe fire, so quickly go to the edge of the lava pool, use your shield and you will be safe. Take the Heart Container and get into the blue light.

The Goron chief thanks you and gives you the Goron's Ruby, the second spiritual stone.