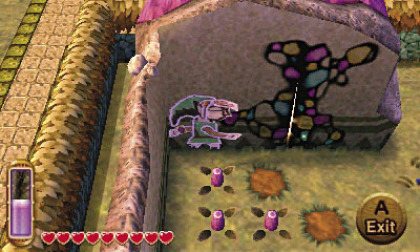 In Thieves' Town, head towards a wall in ruin at the centre of the village and enter the fissure. You find yourself in the house of a stylish woman who offers you a Piece of Heart! Go back home and buy bombs if you haven't done it yet. Afterwards, head back to the region of the Eastern Palace, go to the area southeast of its enclosure, go left and place a bomb against the cracked wall, which hides a fissure. Enter inside. 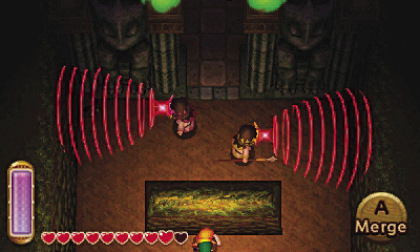 When going out, Hilda asks you to go to the Dark Palace, as the Sage there is in desperate need of your help. Get rid of the enemies around you to maybe get a monster horn. Head north and use the ladder. Hilda says that the followers of a great and terrible beast can be found here, that they used to be the soldiers of Lorule Castle and that they will try to imprison you. Beware the red light beams which must not touch you. Go west, then north and watch the red beam. As soon as it heads right, merge into the hedge and go right to exit further. Next, you need to sneak between two soldiers. Merge into the central hedge, move to the other side, then when the soldiers are facing opposite directions, walk to the north quickly! 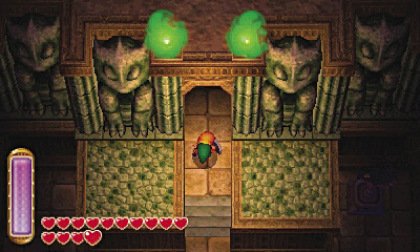 Go left, merge into the left hedge, exit when you reach the end and merge again just nearby to sneak past the second guard. Continue east, south, climb the steps up when the guard goes away, continue south, merge into the stone pillar to reach the other way, continue right, make a small detour to the north to get a Piece of Heart, follow the guard to avoid him, then climb the steps down. Get rid of the enemy, turn into a painting to unstick the maiamai on the hedge and pick it up. Slash the skulls, then head south. Merge into the hedge on the right to avoid the next guard, then go right. Move north when the two soldiers go away, then merge into the opposite hedge, move right or left and exit at the right or left end of the hedge. Merge quickly with the hedge further north and go left or right to avoid the third soldier. Climb the steps up then down, merge into the hedge in front of you and quickly go to the right to sneak past the last soldier! Go right and touch the weather vane to activate it. Place a bomb in front of the door, then enter inside the...