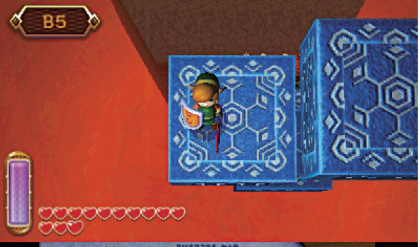 Use the Fire Rod to melt the ice block, then go on, grab the tongue of the statue and pull: Some platforms activate. Actually it's a lift which allows you to go down to the 5th basement! Before using it, step onto one plateform going up and quickly get into a recess south to open a hidden chest holding 300 rubis! Then step onto a plateform to reach the lowest level. On the 5th basement, open the big chest which contains the Big Key! Then take the lift back up to the...

Wave the Fire Rod to melt the ice on the floor and above, then pick up the Small Key. Use the lift to go up to the... 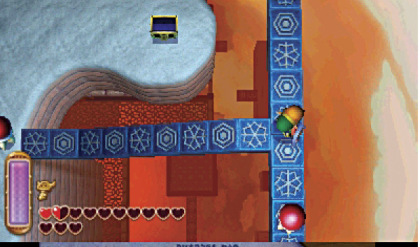 Head north and unlock the door. Grab the tongue of the left statue and pull, which opens the eastern door. Continue east, get rid of the penguin enemies, then light the four braziers with the Lamp. A key falls on blocks above. Continue south.

Open the chest which holds the Compass, then walk on the narrow frozen walkway and go north. Merge into the wall, go around it and exit near the Small Key which you can take. Turn around on the narrow walkway, merge again, backtrack, and this time, go to the far south, then unlock the door to the southwest. 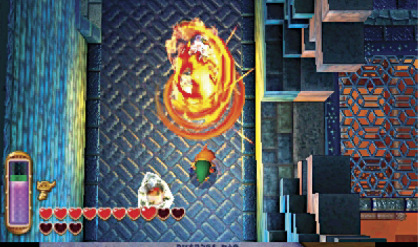 Turn into a painting left to the door, go left and exit further. Open the chest which holds only 5 rupees, then merge again, go left and exit on the other side of the room. Pull the tongue of the statue, which causes part of the floor to drop out and move to a new position. Merge into the wall again, walk left and exit on a small outdoor ledge, then take the path to the southwest. Smash the skulls, have a look at the floors below, then go back east and drop where the floor moved down.

Take the path right, then melt the icicles and step on the floor switch hidden under one of them, which opens a door to the northwest. (To access the Fairy Fountain, merge into the wall to the northeast of the room, go right and exit on the other side of the wall.) Climb the steps up and take this path to the northwest. Drop through the large hole to arrive to the... 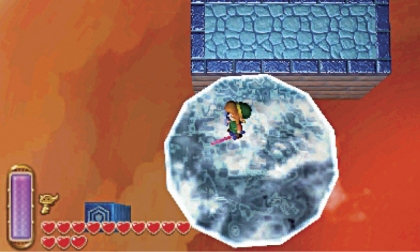 Go left, walk onto the moving platform and let the flying enemy throw a bomb on the northern platform with the four crystal switches, or else throw a bomb towards it, which makes a chest appear to the right. Go back right and open this chest to get 100 rupees. Next, go back on the moving platform and step off on the left. Take the narrow path, then go onto the round ice block. Get rid of the bats, then get off on a small platform to the southeast. Open the chest at the end of the narrow walkway which holds some monster guts, then go back on the ice block and use the Lamp or the Fire Rod to light the brazier at the centre of the route, which causes a new platform-lift to appear. Walk onto it and step off on the...

Continue on the narrow path to the south, walk onto the moving platform and drop to the left when you see a chest downstairs... 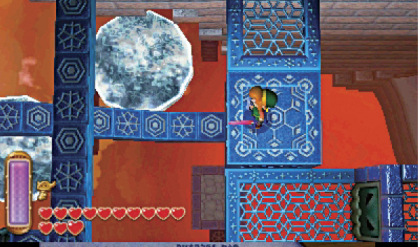 ... and open the chest which contains 50 rupees. Ride the ice block again, go back north, and take the lift again to the...

Take the narrow walkway to the south again, walk onto the moving platform, then the next one, then get off on the grid platform to the north. Walk onto the northern platform, then on the grid platform and go north. Turn to the right and use the Fire Rod to melt the four closest ice blocks, which makes a switch appear. Backtrack, walk back onto the platforms, take the narrow path again and take the path to the right to come back in this same room. Fire an arrow at the switch on the other side of the pit, which causes another platform-lift to appear. Merge into the upper wall, go right, exit on the lift and go upstairs to the... 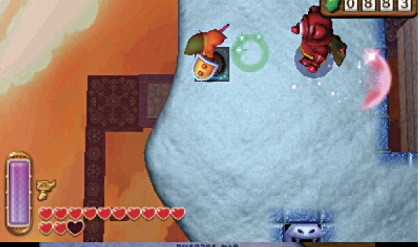 Defeat the three one-eyed enemies, smash the skulls and stand on the floor switch, which unseals the next door. Take this new path east. Pull the tongue of the statue, which causes part of the floor to slide away and drop down to the...

Open the big chest which holds the Stamina Scroll! The energy gauge increases! Jump on the ice blocks on the left and use the lift again to come back to the...

Head south, look downstairs, then drop on the narrow path. 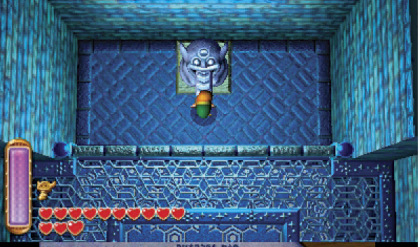 Walk carefully and light the brazier, which opens a door on the right. Turn around, and in the middle of the path, drop on another narrow path to the right, then take this new path east. Open the two chests containing a monster horn and a green rupee, then use the lift again to go up to the...

Go back to the room east, climb the steps up, go back west, drop down, then pull the tongue of the statue to the north, which makes the floor move down. Jump. 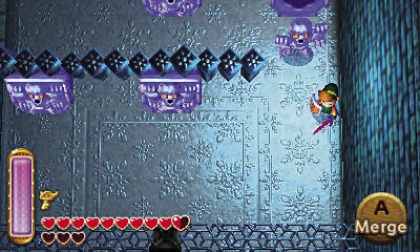 Get rid of the enemies, then as you try to go out, the doors close and a giant penguin suddenly appears! Defeat him, as well as the small penguins, then the doors open and a warp portal appears. Go through the west doorway, walk quickly on the frozen path, then pull the tongue of the statue, which moves part of the floor again. Go back to the previous room, then take the path east.

Head south, get rid of the enemies which wake up, then wave the Fire Rod to light the brazier above, which unseals the southern door. Take this new path. Defeat the two ghosts, then stand on the floor switch, which opens a door further south. Merge into the wall to the south, go left and exit on the other side. Go south and drop through the hole towards the chest. 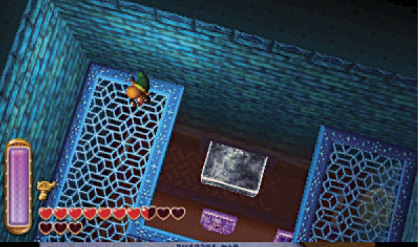 Open the chest to get a Small Key, then take the left path and stand on the floor switch, which causes other parts of the path to appear. Take this new path to the north and use the lift to come back to the...

Go back east, enter the room on the left, drop down to the 3rd basement and take the lift again to go up to the 2nd basement. Merge into the wall to the left of the door, then go left to the northernmost side of the dungeon (!), then come back inside and open the chest which holds 100 rupees! Backtrack and come back to the west side, enter the dungeon, merge into the upper wall, jump after picking up the green rupees and exit right. Climb the steps up again and unlock the door on the right. Go on and drop on the ice block below. 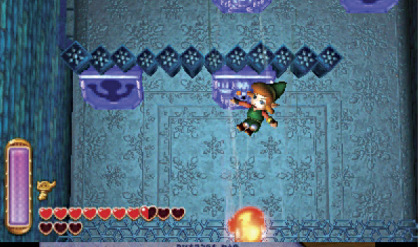 Wave the Fire Rod to melt this ice block, which creates an air flow. Walk into it, which takes you to a platform with a statue. Grab and pull the tongue, which causes yet another part of the floor to go down. Go back north and drop through this new hole.

Go north, melt the icicles, then walk on the frozen paths to the south, while being careful of the enemies here: they can drop bombs which temporarily destroy these paths. Use the Fire Rod on the brazier to the right, which connects two paths, then continue south, go left and take the narrow path to the north. Pull the tongue of the statue, which causes another part of the floor to move for the last time! Then continue north and stand on the switch, which creates a shortcut. Backtrack, go left and open the boss door.

Smash the skulls to recover a few hearts, then drop through the hole. 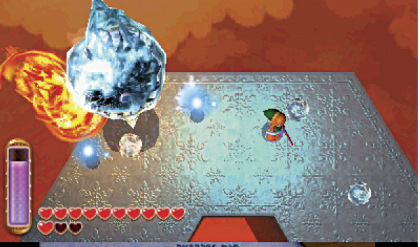 As you will immediately guess, you need to use the Fire Rod several times to melt the ice around him. As soon as this is done, run to him (without falling) and try to strike him as many times as you can with the sword before he encases in ice again. You have to repeat this technique until you finally beat him. During the fight, keep moving and avoid his attacks, particularly the "triangle" one. As soon as you see three points forming a triangle, run outside to avoid being hit.

Take the Heart Container, then touch the portrait to the north. In the Sages' room, Rosso turns to be also a Sage. Walk in the bright circle to go out. As for her, Hilda says she can feel the power of the Triforce of Courage and is sure that Lorule will be saved thanks to you.

You find yourself back in front of the Ice Ruins.