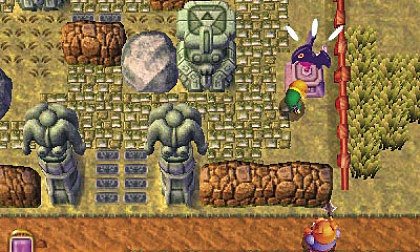 Call Irene to go back near the empty house, then enter the fissure to return to Hyrule. If you have visited the dungeons in the same order as in this text, you now own one Master Ore and the Titan's Mitt. So go back to the Sanctuary, walk to the end where the priest is standing and enter the fissure. Back in Lorule, light the brazier, talk to the priest, then cross the walkway (pick up the rupees with the Boomerang) and go out. Outside, Hilda talks to you and says that an important object can be found in the surrounding area.

Head east towards the graveyard and touch the weather vane there. Next, lift the large rock in the northeast corner of the graveyard and walk down the stairs. Smash the skulls hiding a floor switch on the left, then step on it to open the door to the north. Move on, head left, climb the steps up, then go to the far east. Take 20 rupees in the chest, then merge into the wall, walk to the right and exit near the Small Key to pick it up! Go back left, unlock the door and go through. Defeat the three one-eyed enemies to reopen the doors, pick up the three red rupees, then, in the next room, pull the lever to the right to unseal the door. (The one to the left causes snakes to appear.) Walk up the stairs. Move on a little, merge into the wall, then open the big chest which holds another piece of Master Ore! Drop down to the left and leave via the south path.

Having now two other pieces of ore, go back to Lorule's blacksmith. Talk to the boss who first seems put out, then leave so that he notices your upgraded sword, amazed. Follow him inside and talk to him again. He then sees the pieces of ore and upgrades your sword in his turn. Then he says that you will be unstoppable with this sword, which has now reached level 3! 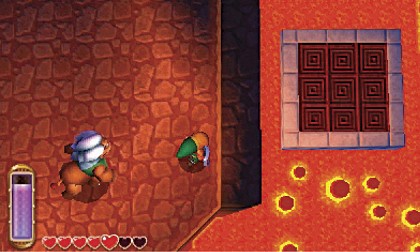 Return to Hyrule, call Irene and choose the Tower of Hera as your next destination. Continue east, use the Hookshot to cross the broken bridge, then go east and enter the cave near the sign "Rosso's ore mine". Walk onto the moving platform, then, when it is completely to the left, jump on the platform below, then on the next one, and get off south. Beware the two lions spitting fire. 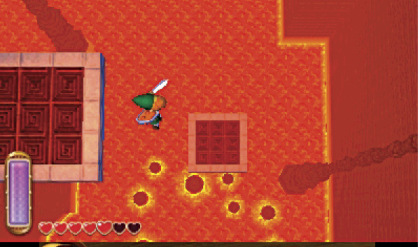 Merge into the wall on the right, go around it and exit on the moving platform when it arrives from the east. Drop on the next platforms to reach a way out to the south and go through. Walk south a little, turn left, take a few steps to the north and head west, then enter the fissure on the left. 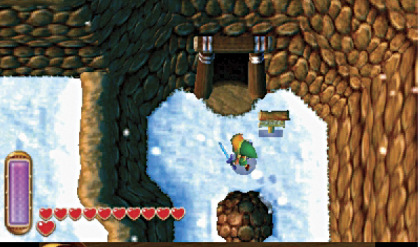 Back in Lorule, Hilda calls you and tells you that you are in Death Mountain where it is always winter. Touch the weather vane to add it to the map, then call Irene again and choose the empty house. Return to Hyrule, enter Ravio's Shop and buy or rent the Fire Rod, as well as the Bow if you haven't got it yet. Afterwards, return to Death Mountain in Lorule. 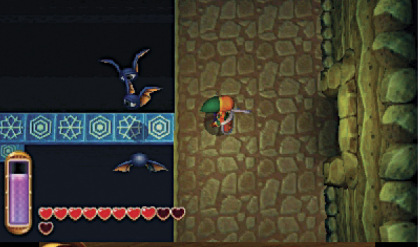 Head northeast and enter the cave. Walk on the narrow path, then on the next ones, merge into the one which is higher to exit on another narrow path, then merge into the wall and go around to reach a fixed platform! Read the sign to learn that you must continue northward. Next, defeat the gargoyles which come to life thanks to the Fire Rod, then merge into the left wall and exit on the other side. Get rid of the giant gargoyle while avoiding falling, then walk on the narrow path to the north, then on the next two to reach a fixed platform. Continue east and proceed on the moving paths to reach east. Go through the doorway and go out south.

After having read the sign on the left, head north, then southeast and touch the weather vane to add it to the map. Climb the steps down, wave the Fire Rod on the gargoyle to melt it, then enter the...