Differences between the GameBoy and Switch versions

End of the trading sequence

After finding the last item of the Trading sequence, you can get the Boomerang in exchange of one of your other items. On Switch, you can now get the exchanged item back for 300 rupees while keeping the Boomerang in your inventory.

Figures at the Trendy Game

At the Trendy Game in Mabe Village, you can catch figurines from the Mario universe which can be placed on different stands located in the houses of the village. You need to place a figure on its pedestal before being able to get another one.

After catching BowWow (the last of these figures), the salesman offers you a chamber stone and says that now it will only cost you 5 rupees to play.

These new heart pieces are now on the Pieces of Heart page.

These new secret seashells are now on the Secret Seashells page.

These bottles are now on the Items page. 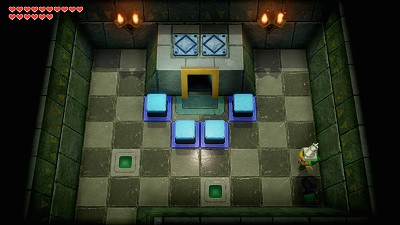 To know where to stand to throw a horse head onto its location, first of all when you're carrying the head, it must look towards the green square. Then you need to stand three squares further and a square beside relative to the green square.

Getting rid of the beamos

At Turtle's Rock, you can neutralize the rotating beam-throwing statues by raising the Mirror Shield at the beam. It will then be reflected at the statue, which will disable it! In the original version, the beam was reflected without disabling the beamos.

Room with the 5 treasure chests in Tal Tal Mountains

When you're heading to Dungeon 7, after crossing the water with the Flippers, in the first cave to the right, there's a cracked wall leading to a room with 5 chests. On GameBoy, the 5 chests each hold 20 rupees, and if you leave the room (having opened at least one chest) and you go back, the 5 chests will be opened even if you haven't opened them all. On Switch the 4 first chests hold a gel and the fifth one 100 rupees (only feasible when entering through the bottom). If you don't open all the chests and you leave the cave, when you go back in, they'll be all closed again (unless you opened the 5th one, of course).

Route in the Wind Fish's Egg

On Switch, if you don't complete the trading sequence quest and you don't visit the library to read the brown book with the Magnifying Lens, the inside of the Wind Fish's Egg stays in the dark. You cannot find the path by chance, the game blocks the player to force him to finish the trading sequence. On GameBoy, the rooms are lit up and it's possible to find the path by chance.

The final form of the Shadow Nightmares is not "lethally" sensitive to the Boomerang anymore. In the GameBoy version, the last shadow could be defeated in one shot with the Boomerang, whereas on Switch, the Boomerang inflicts damages but doesn't "one-shot" it like before.

Thanks to Maella, Samchi and Lyanna for these tips!