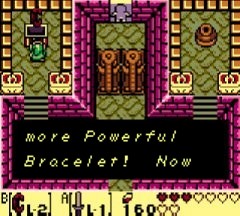 With at least 10 bombs, go left, avoid the enemies and go on to the top left, then up and left. Drop a bomb next to the crystal, then quickly stand behind the orange slab to the top right. When the bomb explodes, go up. Drop a bomb next to the right wall, go ahead, get rid of the gels, then take the stairs. Go through the underground tunnel, then fight off the Wizzrobes (the appearing-vanishing enemies) with your bombs or arrows.

Go up, pick up the Powerful Bracelet in the chest and the small fairy in the pot, then throw the statues and head up. Go right, down twice, get rid of the enemies, then go to the top right and pick up the 50 rupees in the chest. Go on up, find 100 rupees in the chest and go left. Hit the crystal, then again drop a bomb next to it, go quickly behind the slab to the top left, then go up. Toss the pots to find some ammunition, step on the switch and go left. Get rid of all the Wizzrobes, by dropping and tossing a bomb against the crystal to reach the last one, then pick up the Map in the chest. 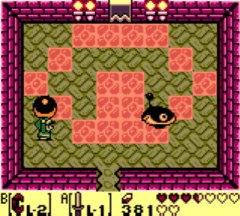 Go up, pick up the bombs in the pots, then go right and find the Stone Beak in the chest. Go back to the left, toss a pot against the door, go up, to the right and pick up the Compass in the chest. Hit the crystal, pick up the flying bombs, then get back to the left. Throw a statue against the door, pick up 100 rupees in the chest, then climb the stairs. Outside, open the chest to find a Secret Seashell (or 20 rupees). Take back the stairs, toss the two horse heads to make them stand up and go down. Then go right, down, right twice, up, get rid of the Wizzrobes and pick up a Small Key.

Now, you can play Manbo's Mambo to get back to the first room, then go right twice. Get rid of the slabs with your sword or shield (stay on the left), then go up and toss a statue against the door to the right. Go right, fight off the Wizzrobes, then go up three times, pick up the Small Key in the chest and go back down three times and go left. Open the door with the Small Key, go up, drop a bomb next to the top wall and go on. To get rid of Smasher, pick up its ball and throw it back at it four times. After the warping whirlpool has appeared, go up, throw the statue on the left and take the stairs. Go through the underground tunnel, then quickly go to the bottom left of the screen and strike the slabs. Pick up the Small Key, unlock the block and go up. 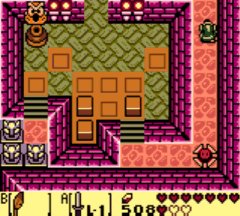 Throw the statue at the door, go left, make the two horse heads stand up and go on to the left. Go down the stairs, go across using the Pegasus Boots, then play the Ballad of the Wind Fish to get rid of all the enemies at once! Go up twice, pick the 200 rupees (300 rupees on Switch) in the chest, lift and toss the horses until they're standing up to leave, then go back down twice picking up the floating bombs. Go down again, defeat the Dodongo Snakes with some bombs, then go left and use the Hookshot to get past the gap. Unlock the block, go up twice and read the owl's clue. Open the chest by throwing a pot on it and grab the Nightmare's Key.

Hit the crystal, then go down twice, jump into the water and go down twice more. Get rid of the Wizzrobes, go down and read the owl's clue. Climb the left stairs, jump to the right and stay on the risen blocks to reach the other stairs. Go up, pick up 50 rupees (or a Secret Medicine) in the chest, then jump to the left. Go left and go up up to the statue hiding some stairs. Go downstairs again, cross the underground tunnel again, then go down. Go around the room to get rid of the gels while avoiding being drawn, then go right. Toss a bomb at the enemy from the bottom of the screen, then go up. Light the two unlit torches to turn the enemies into fairies, then unlock the Nightmare's lair.

Beating Façade (thanks for the gratuitous French!) is quite simple: First of all, get rid of the flying slabs and pots, then drop five bombs on the face while avoiding the holes. Pick up the Heart Container, then go up to get the Coral Triangle.