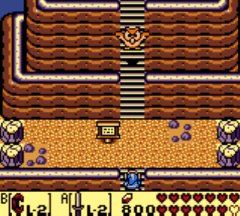 Play Manbo's Mambo to get back to Koholint Prairie. If you haven't completed the trading sequence yet, do it now. If you still didn't go to Mabe Village's Library, get there and use your Magnifying Lens to read the book to the bottom right and note down what it says. The directions are not the same for everyone! You can also double your bombs, arrows or Magic Powder capacity. To do so, go south of the Mermaid statue (J16), use your Magic Rod to burn the bushes down, jump with some momentum, then go down the stairs, go through the underground passageway and when going out, take the following stairs. Throw some Magic Powder into the well and the bat will give you more arrows.
On Switch, fill in your bottles with small fairies at the Fairy Fountains.

Play Manbo's Mambo to save some time, then equipped with Magic Powder and especially the Eight Instruments of the Sirens, go to Mount Tamaranch on the way to Tal Tal Mountain Range and climb the stairs (G3). The Owl will arrive and explain to you how to wake up the Wind Fish. Keep on climbing and play the Ballad of the Wind Fish in front of the egg. Once it's shattered, get inside the... 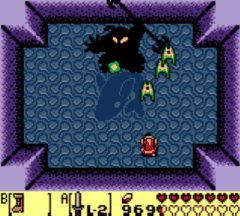 Go up and fall into the pit. Follow the indications from the book you read in the library to go ahead and find the exit of the maze, then jump into the second pit. On Switch, start by going up and then follow the book's directions. Here is the final battle against the six Shadow Nightmares:

First nightmare: Wait until the enemy disappears and re-appears, then throw Magic Powder three times at him.
Second nightmare: Use your sword to deflect the energy balls at it four times. When it starts to throw stars, avoid them!
Third nightmare: Hit the enemy's tail several times.
Fourth nightmare: While avoiding the bats, rush four times at Ganon's shadow with your Pegasus Boots while brandishing your sword.
Fifth nightmare: Use the Magic Rod to burn the enemy down.
Sixth nightmare: The hardest! Use Roc's Feather to avoid the tentacles and shoot 20 arrows at the foe's open eye. Hopefully, there is a simpler way: throw the Boomerang at his eye while standing next to him.
On Switch, you can also use the Boomerang but you still have to hit him 20 times. Fortunately you have Fairy Bottles. 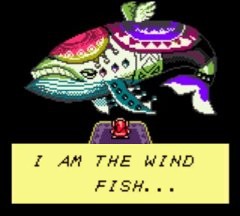 Finally, the Wind Fish is able to wake up. After climbing at the top of the ladder, the Owl thanks you for your efforts, then lets the Wind Fish (who looks more like a whale) speak to you. After telling you about his dream and the real world, he asks you to play the Ballad of the Wind Fish to wake both of you up. You are then thrown out of the island and you end up at sea, clenched to a wooden plank, like at the beginning of the game. In the sky, the Wind Fish continues his travel.