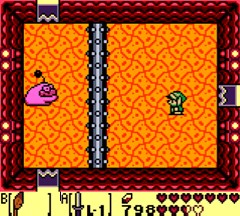 Go up, fight the red bat with either the Hookshot, Bow or Boomerang, then go left. Get rid of some snakes, go up and fight Hinox again. Go left. Here you will see some sort of raft that you will also find in other rooms. Push the raft, then move it while "moving still". Here, move it left and down to reach the bottom of the screen, then go down. (If you fail, go back to the right then into this room.)

Jump to the right, pick up 50 rupees in the chest, then go left. Get rid of the Rolling Bones like the previous time, then go down, pick up the Compass in the chest and go back up. Go up again, strike the enemy and pick up the Small Key. Go back to the second room from the beginning (the one with the first flying enemy). 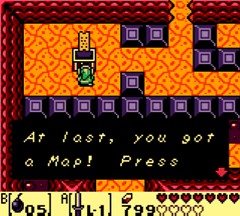 Go up, right and you will find another raft. Push it so it goes straight ahead, go on, then jump to the left and go up. Go left, drop a bomb next to the bottom wall (in front of the third block from the right), go ahead, push the blocks and pick up the Map in the chest. Go back up and take the stairs. Go through the underground passage, then get rid of the snakes and grab the Stone Beak in the chest.

Go up to meet Smasher again. Once it's defeated, go up, read the clue, walk on the switch under the pot to unlock the door and get back down. Go left, ride the raft to recover all the space (anticipate for the changes of direction) and pick up the Small Key. Go left three times, go up, right, and move the raft to place it to the top between the two blocks in the lava. Go ahead, push the right block and go up. Unlock the block at the end of the path, then go right and open the door to the right. 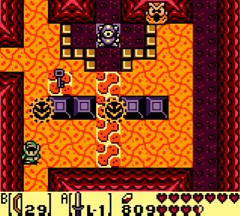 Go down, read the owl's clue, climb on the block (Switch only), shoot an arrow at the statue, and pick up the Small Key that fell down. Then go down, refill your ammos and get back up. Go left, push the blocks to find a Small Key in the chest, then come back to the right (while jumping diagonally), up and take the stairs to go outside. Climb the stairs to pick the Piece of Heart, then go right, get past the warp hole (don't forget to activate it on Switch), go on to the right and take the path to come back into the dungeon. 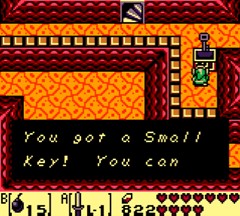 From this place, throw your bombs at the Dodongo Snakes when they are coming at you, then pick up another Small Key in the chest. Go left, jump, climb the stairs, go up, then use the Hookshot to find 20 rupees or a Secret Medicine in the chest. Jump to the right, pick up ammos, then go up and take the stairs. Go through the underground passage by using the Hookshot on the gargoyle, then come back to the left twice and down. Push the block, jump to the right, go up, right, go down the stairs and go down. Jump down, then drop a bomb next to the right wall. Go ahead, hit the crystal and come back left.
Be careful, if you die after this, you will have to hit the crystal again until you get the treasure of this dungeon!
Climb the stairs at the bottom, go down, jump down and go back left twice. 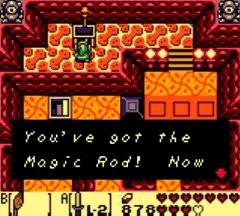 Go back up once more, aim the raft towards the top between the two blocks to go up again, then go right twice (into the room with traps in each corner). Go up, blow up the left wall and go forward. Throw some Magic Powder into the torch, jump left by sticking to the top wall and unlock the block at the bottom left. Go on left and go left again. Here, blow up the bottom wall to make a shortcut, but stay in this room, unlock the block at the top right and go right. Light a torch, use the Hookshot on a block and unlock the third block. Take the stairs, go through the underground passage, then jump down to fight Blaino.

Be really careful, because he can send you back at the temple's entrance in one hit! To defeat him, wait for him to load an uppercut and right before he hits you, quickly hit his back or his sides under him (it's better to have the Level 2 Sword here). Or easier: stay in the top right corner of the room, turn right and hit him as much as you can when he's near you. If you get send out, you don't have to hit the crystal, go back to the raft room, go up in the middle, then go left (instead of right) and jump towards the hole in the wall to get back to the fight faster. Once you've defeated him, go up and pick up the Magic Rod in the chest. Go back down and take the warp whirlpool.

Go up, left, up, and fight Hinox again! (on GameBoy only) Then go left and use the raft to go up. Use the Magic Rod to light the two torches, pick up the Small Key in the chest and go back to the second room (use Manbo's Mambo if you want to). Go up, right and lead the raft to the right (to the bottom). Go ahead, climb the steps at the bottom and take the stairs.

Use the Magic Rod to melt the ice cubes and go through the underground passage (in the second part, use the Roc's Feather to melt the second line of blocks). Unlock the left door and fight Cue Ball once more. This time, stand in a corner and hit it relentlessly with the sword when it's coming at you. Then, go up and move the raft to fill the empty space (start by making it go behind the two torches). Pick up the Nightmare Key and play Manbo's Mambo to warp. 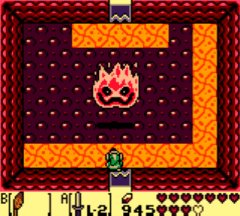 For the last time if everything goes well, go up twice, right and lead the raft to the right. Go right and take the stairs in the top-right corner. Go through the underground passage using the Magic Rod: In the first screen, melt the blocks of the two bottom rows and get rid of the enemy, then climb the ladder, melt the blocks on your left, go ahead, melt the block above, jump and melt the upper row, melt the left column, then take back the ladder, go towards the last column, jump and while you're jumping melt the left block (!), then climb back the ladder and jump towards the exit! In the second screen, melt the bottom row, then the fourth column from the left and jump on the ice blocks to reach the left ladder.

Finally, unlock the Nightmare's lair. To defeat HotHead, stay close to the door and use the Magic Rod to hit it quickly several times, because it can regenerate itself when diving! After getting a new Heart Container, go up and pick up the Thunder Drum, the last instrument!