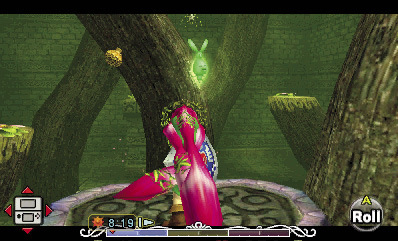 A tip for all temples: It is hard to clear out a whole temple within three days, meaning, defeating the boss + finding all stray fairies + performing specific actions after the boss has been beaten. So, before anything, you should focus on the boss. Because once the boss is beaten and the game saved, when you are back to the temple, you can directly go to the boss room to fight him again and carry out all necessary actions afterwards. You can also look for stray fairies once the boss is done, you will just need to find all the small keys again according to their locations.

In this temple, like in the other ones, there are 15 stray fairies to find. You can use the Great Fairy Mask to bring to you those that are freely flying around. 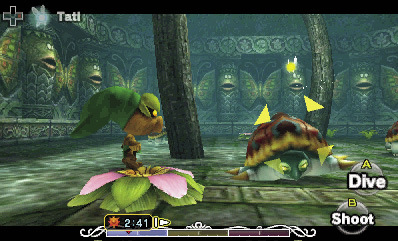 So, put on your mask to get the 1st fairy, then as Deku Link, get on the platform on the right and open the chest to find the 2nd one. Continue northward and open the door. Go down the left slope and get rid of the Deku Baba to find the 3rd fairy. Climb this same slope and jump to the southeast corner in order to find the 4th fairy in a group of pots. Go towards the door on the right, open it, then go on the platform on your left and get a Small Key in the chest.
N64: Shoot a bubble on the hive against the wall to the left of the chest and put on the Great Fairy Mask to find the 5th fairy.
Next, open the other door to the east. There, you will have to defeat three enemies in order to get out: Dive into a Deku flower and when one of the turtles passes over you, take off to turn it over. When they are all gone, open the chest, take the Dungeon Map and get out.

Go back west, get out, then use the water flowers (as Deku Link) to get to the other side of the room and unlock the door with your key. Push the stone block which is preventing you from going on, go right and fight the Skulltula to find the 5th/6th fairy. Go on, and push the stone block twice, then go back where the Skulltula was. Light on a Deku stick with the torch, run towards the extinguished torch (south of the map) to get it lighten up and open the nearby door. Get in, get rid of both flying enemies in order to find the Compass in a chest and get out.

Spit a bubble at the hive over the stone block to find the 6th/7th fairy. Light up another Deku stick, quickly go up the slope, light on the torch, jump on the two platforms to reach the top door to the north and quickly burn the spider web! If your stick is already consumed, light another one with the last torch. Go on and climb the stairs. 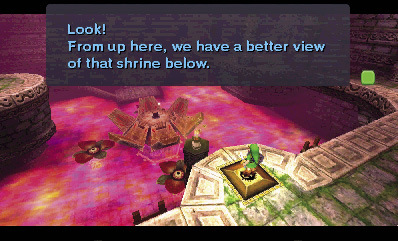 Defeat all the dark creatures to make a chest holding the 7th/8th fairy appear. Afterward, light a Deku stick, light up all three torches in the room to unlock the door and open it. First of all, walk downstairs and get rid of the two flying enemies.
3DS: Find the 8th fairy in the northwest corner.
Then go upstairs and fly through the room towards northeast (on your map). Walk down the stairs. Stand on the switch a little further, then open the door nearby. Go right, open the door and prepare yourself for the fight... 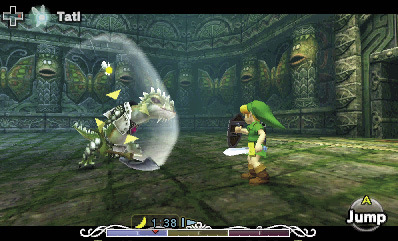 To fight him, use your shield to protect yourself from his attacks and hit him with your sword when he jumps. Move back when he breathes fire and repeat this technique. Next, open the chest and be rewarded with the Hero's Bow along with 30 arrows!

Get out and fire an arrow at the eye in front of you, which activates a lift. As Deku Link, fly on this lift, then when the lift is at the highest, glide northward and open the door. In order to beat Gekko, dive in a Deku flower and take off when he passes over you. When he calls his turtle, dive again and take off again when he's over you. Afterward, quickly remove your mask, look for Gekko on the walls, target him and fire arrows to hit him. Repeat this technique twice, then open the door, open the chest and get the Boss Key. Come back to the previous room, as Deku Link, glide towards the door on the right (west of the map) and open it. Stand on the switch, target the torch at the centre of the room and fire an arrow through the lighted torch to light the other one. 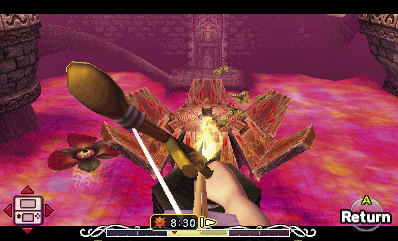 From now on, the water will be cleansed and the "metal flower" goes up. Go north and break the bubble to get the 9th fairy. Glide towards the northwest corner, then step on the switch to make a chest appear. Jump in the water, go up the slope and open this new chest to get the 10th fairy.
3DS: Jump into the water again, climb the ladder on the right and open the door. Take a few steps on the right, look behind you and shoot a bubble or an arrow at the hive to get the 11th fairy. Get back out.
N64: Go down the slope again, open the door on the left and swim in the centre of the room to retrieve the 11th fairy. Get back out.
Jump onto the spinning flower. Now you have to light up the torch in the northwest corner by firing an arrow through the lighted torch near you. When you've made it, the north door is unlocked. Go through this door to the north to enter the last big room. 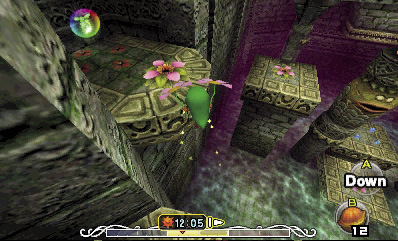 Climb down the ladder, jump on the central platform in front of you and get rid of two flying enemies. Next, come back towards the southern wall and fly higher to your left (west of the map) to get the 12th fairy captured in a bubble. Then fly twice always higher in the same corner of the room to get the 13th fairy. Now go back to the bottom of the ladder, glide towards east (while staying near the wall) three times and find the 14th fairy. From there, fire an arrow at the bubble and use your Great Fairy Mask to bring the 15th fairy to you. Come back to the previous platform. Fire an arrow at the diamond to put out flames, then glide towards the platform on your left, then on the second pillar (the one with a flower) and finally, to the platform to the north where the boss door is. Remove your mask, break the pots and unlock the door. 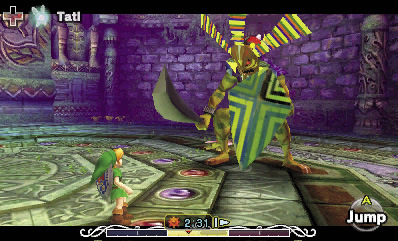 Hit his legs with your sword several times, it's easier when he is "singing" and calling bats. Another method consists of diving in a flower, taking off and dropping Deku nuts on his head to stun him and then striking his weak point on his head. Repeat these actions several times. When he breathes fire, stay still and fight the small creatures to recover some hearts. Once defeated, take the Heart Container, get into the light and seize Odolwa's remains. You will also learn the Oath to Order, play it to cleanse the swamp poisoned waters. Back outside, Tatl says that the four people mentioned by Tael are maybe sealed in masks.

After the cutscene, cut vines behind you in order to find the Deku Princess and use your bottle to take her with you! If you succeeded in finding all 15 stray fairies, bring them to the Fairy Fountain to the east of the temple.
3DS: The Great Fairy of Wisdom will double your magic power.
N64: The Great Fairy of Power will give you a brand new sword technique: the Spin Attack!